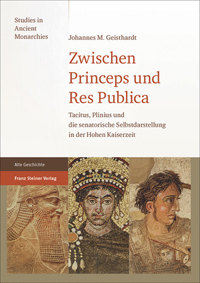 What role did senators see themselves playing in the monarchical system of the Roman principate? It is an important question, but one that is often difficult to answer, given the paucity of sources such as private letters or diaries, which would help to provide us with an insight into the minds of senators. One of the few surviving letter collections from the principate comes from the pen of the novus homo Pliny the Younger. His published Letters should not be treated as representing Pliny's unguarded private thoughts, but constitute a carefully constructed piece of senatorial self-representation. As Geisthardt shows in this revised version of his 2012 Konstanz dissertation, Pliny's Letters can be effectively combined with other literary sources of the Trajanic period to uncover the ways in which senators positioned themselves during the reign of the Optimus Princeps.

In addition to the Letters, the texts considered are Pliny's own Panegyricus, as well as three works written by his fellow novus homo, Cornelius Tacitus (the Agricola, Histories and Annals). Taken together, these literary sources, so Geisthardt proposes in his introduction, offer a better insight into the senatorial order than prosopographical analysis. He argues that the works of Pliny and Tacitus reveal a unity of thought and perspective, which he terms the "Optimus Princeps Discourse". Their literary output shows how senators negotiated their place in a post-Domitianic imperial system under a more benevolent civilis princeps.

The book opens with a detailed critique of the use of prosopography to identify a specific fast track career path for senators with military aptitude. These are the so-called viri militares (as Ronald Syme described them), senators who held only two praetorian posts before being advanced to the consulship. Geisthardt, building on the work of Brian Campbell in particular, argues against such a concept and the unnecessarily schematic interpretations of so-called cursus inscriptions. This opening section is not only an excellent summary of the scholarly debate over the past half-century, it is also convincing in its argumentation. But it is also makes for a rather strange opening to the book, and perhaps should have been relegated to an appendix.

That said, the structure and ordering of the main chapters focusing on Pliny and Tacitus is much more effective, and I enjoyed the way the analysis unfolded through a series of detailed case studies. In Chapter One, Geisthardt makes an argument for reading Tacitus' Agricola as a transitional text, negotiating the passage from Domitian's tyranny through the uncertainty of Nerva to the stable Trajanic principate. In exploring the trials and condemnations of Domitian's regime, Geisthardt positions the Agricola as a "plea for a collective amnesty" among the senatorial order, allowing it to benefit from the blessings of Trajan's rule.

Chapter Two proceeds to examine Pliny's Panegyricus as representative of the new "Optimus Princeps Discourse" which emerged under Trajan. Geisthardt places the genre of the gratiarum actio in its socio-political context, before exploring how the speech creates the image of Trajan as the idealized civilis princeps in contrast to the tyrannical Domitian. The delivery of the Panegyricus, and especially its subsequent revision and publication, helped to shape Pliny's place as a model senator within the ordo at large, as well as articulating the senate's role in the Trajanic state. It was the freedom and otium that Pliny enjoyed under an emperor like Trajan that allowed him the opportunity to produce such a work.

We stay with Pliny in Chapter Three, which begins by examining his self-representation in the cursus inscription from Como, a text that includes both his official career in imperial service and his generous benefactions to his community. Geisthardt offers an excellent analysis of this inscription and the way in which its emphasis on Pliny's public munificence portrayed him as the princeps of Como itself. The chapter then proceeds to examine the Letters, which constitute another product of the author's otium guaranteed by the Trajanic state. The self-representation of Pliny in Books 1-9 follows the same themes as the Panegyricus, as the senator defines his important and substantial role within the state through his own correspondence. Pliny emerges from this analysis as an optimus civis in emulation of the Optimus Princeps. Geisthardt makes effective points about the different aims of the Como inscription and the Letters. In particular, the Letters offer a more complex interpretation of Pliny's life through its exploration of the themes of otium, which is not possible in the inscribed text.

In Chapter Four, Geisthardt turns his attention to Tacitus' Histories, focusing predominantly on the role played by leading senatorial office holders of praetorian and consular rank in the events of A.D. 69/70. He offers a detailed analysis of key figures such as Fabius Valens, Caecina Alienus, Licinius Mucianus, and Suetonius Paulinus. He argues that the crisis and civil war in Tacitus' narrative serves as a contrast to the situation that prevailed under Trajan. One important point Geisthardt makes concerns the imperial succession itself, as Tacitus' readers would know that Nerva's choice of Trajan as his heir avoided a civil war like that which occurred in A.D. 69. The transference of power to Trajan was much more successful than Galba's adoption of Piso, which ultimately failed to save his regime or prevent further conflict.

Chapter Five examines the Annals, focusing on the Tiberian hexad. Geisthardt dates these books to the Trajanic period, arguing that their themes reflect the discourse of that era (rather than the reign of Hadrian). Tacitus' Tiberius is revealed in Geisthardt's analysis as the "Anti-Trajan". He does not embody the same civilitas as Trajan, and his regime is not marked by the same libertas enjoyed by Tacitus and his contemporaries. This is a valuable and stimulating analysis of the early books of the Annals.

In conclusion, this book offers a detailed and thought-provoking interpretation of senatorial self-representation in the age of Trajan as seen through the writings of Pliny and Tacitus.