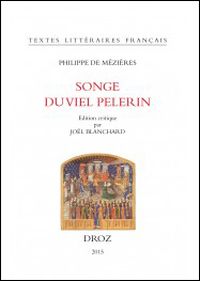 No one has spent as much time with the Old Pilgrim (as Philippe de Mézières [1327-1405] often referred to himself) as has Joël Blanchard, whose extensive work on late medieval political literature encompasses authors like Christine de Pizan, Jean de Roye, and of course Philippe de Commynes whose works he edited, translated, and interpreted. Blanchard's extraordinary productivity coupled with the highest degree of historical, literary, and philological expertise has now given us a new and splendid edition of one of the key texts for an understanding of fourteenth-century political thought, the Songe du viel pelerin (Dream of the old pilgrim), composed between 1386 and 1389.

Numbers can tell the story of the immense amount of work that went into this edition: 160 pages of introduction, another 160 pages of notes, 90 pages of variants, plus an extensive glossary and index. A recent upswing in research on Philippe de Mézières, encompassing both new editions and critical studies [1], makes this new edition especially timely, and scholars can now count on a reliable, superbly well documented edition that replaces the 1969 edition by G. W. Coopland. That edition was based on an inferior manuscript (as the editor realized about half-way through!) and riddled with errors. Blanchard has chosen as his base text what is undoubtedly the best manuscript, Paris, Bibliothèque de l'Arsenal 2682-83, corrected by Philippe de Mézières' own hand and probably destined for King Charles VI (1368-1422), whose tutor Philippe had been before the death of king Charles V in 1380. A detailed description of the other eight known manuscripts follows. Much new research went into this description and analysis, as evidenced by the many occurrences of "contrairement à..." in the notes, clearly indicating that Blanchard offers a revisionist view of many received notions about Philippe and his manuscripts. The section on "langue et graphie" harks back to the best traditions of philology, skills no longer taught as a matter of course in our universities.

Blanchard presents Philippe de Mézières' life and career in an exemplary biography of twenty pages: Philippe's travels to the Holy Land as a young man, his participation in multiple military and diplomatic campaigns, his function as chancellor of Cyprus under Pierre de Lusignan (assassinated in 1369), his stays in Venice and Avignon, his time as royal advisor and tutor, and finally the twenty-five years at the Celestin convent in Paris, which saw his greatest literary productivity. Blanchard also explicates some of Philippe's extremely involved allegories, notably the sixty-four squares of the chessboard, which contain Philippe's plans for a reform of France's government and society as well as of the Church. Among many other topics, Blanchard highlights Philippe's critique of the legal profession, showing how the societal changes that brought forth newly powerful classes (such as the pillaging "avocats") in the French hierarchy are reflected in the Songe. Especially interesting is Blanchard's analysis of Philippe's "pragmatisme mystique" (LXXXVIII) and his "Rousseauisme avant la lettre" (XC), two notions that encompass the utopian aspects of Philippe's proposed reforms, that, among many other proposals, included new systems for lending money ("banques de charité"). Like other thinkers of the fourteenth century, notably Ramon Lull and Pierre Dubois, Philippe dreamt of retaking the Holy Land: together with Pierre de Lusignan and his friend Saint Pierre Thomas he crisscrossed Europe in the 1360s, trying to drum up support for a new crusade. This idea dominates in his texts on his proposed Order of the Passion of Jesus-Christ (redacted in French and Latin three times over several decades) and is also important in the Songe.

Philippe was a man of immense learning, whose sources ranged from the Bible, classical and medieval works, to mystical (especially Pseudo-Dionysius the Areopagite), alchemical, and astrological texts. It is in these two latter areas that the collaborators Antoine Calvet and Didier Kahn could contribute their expertise. Blanchard explicates the precise nature of Philippe's original use of the term alchimie as a kind of guiding image, a linguistic tool, rather than alchemy per se. This brief excursus on alchimie is extremely important for a true understanding of Philippe's reformist projects that rely on a (utopian) transformation of all parts of society. But the precise source of Philippe's learning remains unclear ("une immense culture inexpliquée" [CII]), and Blanchard wisely refrains from too much speculation here.

From a literary perspective Philippe's Songe fits in well with other complicated allegories of the time, such as Jacques de Cessoles's (died after 1322) Livre des echecs moralisés (which provided the central image of the chessboard onto which Philippe grafts his plans for reform) or the somewhat later Livre des echecs amoureux moralisés by Evrart de Conty. The popularity of allegorical dream visions, inaugurated by the thirteenth-century Roman de la Rose and continued in a religious vein by Guillaume de Deguileville's mid-fourteenth-century Livre du pèlerin de vie humaine also shaped Philippe's choice of literary genre. In fact, Philippe himself wrote a largely religious allegorical work on marriage, his Livre de la vertu du sacrement de mariage during the same period as the Songe. For the Songe, Blanchard convincingly shows that Philippe must have first written a version in verse (Philippe refers to a previous text entitled Pelerinage du Povre Pelerin) that he then amplified and cast into prose. But what sets Philippe apart from other allegorists is the fact that he did travel widely in real life and had the political and military experience that he then transposed into the allegorical travels of his alter ego Ardent Désir and Queen Truth all over the known world. Their quest to find a place worthy of their forge where they want to produce "bons besants" (good money) is, together with the chessboard of reforms, the Songe's guiding image.

The Songe du viel pelerin is an extremely difficult and involved composition, and most readers would probably be lost without the superb notes that accompany the text. These are endnotes keyed to the pages and lines, so no note numbers clutter up the text itself. Here we learn about such things as the nature of damask, the realm of women called Femenie, the use of paper money in the East, gold in Mali, the course of the Nile in Nubia, the history of Prester John and the Bragamains (Brahmans), about words that are first attested in the Songe, about the Teutonic Order, medieval geography, St. Elmo's fire, how to test gold for its purity... These examples that cover just a few pages testify to the impressive richness and variety of the information conveyed in the 160 pages of notes.

The Songe du viel pelerin is a model of an edition: informed by rigorous philological standards, it offers much more than a scrupulously edited primary text. It recreates the world in which Philippe de Mézières lived, its geography and material culture, its ideologies and conflicts. It lets us enter into the mind of this Old Pilgrim whose plans for reforming this world were so ambitious but who at the end of his life despaired: thousands of pages of advice and admonitions had come to nothing, and strangely, despite the existence of nine manuscripts, the Songe's influence remained minimal. Philippe died in 1405, in the midst of the unresolved Great Schism of the Western Church and of the Hundred Years War - and at the dawn of conflicts that would lead to the French civil war between the Burgundians and Armagnacs. What Blanchard has given us are 1744 pages of his dreams, which though unfulfilled, continue to inspire.