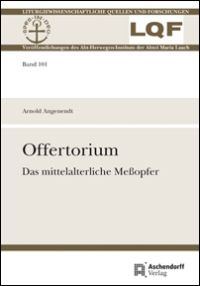 Arnold Angenendt is well-known as the emeritus professor of Church History at the Westfälische Wilhelms-Universität in Münster. This book draws together many strands of his work into a great synthetic treatment of the most important Christian ritual of the medieval period (and today).

The goal of the book is to understand how the Christian Mass is an offering, a sacrifice. His starting point is the word Offertorium, which has several meanings from a ritual moment, to a song, to the conceptual underpinning of the action. He gives a brief orientation to key treatments of the concept, and firmly situates his scholarship in the line of Joseph Jungmann, Adoph Franz, and Peter Browe. He acknowledges the debt owed to the classic social theory of sacrifice first presented by Marcel Mauss. Throughout the book, he builds on these foundations, but adduces the most recent research in various fields of historical, liturgical, theological, sociological, and archeological studies.

The book is divided into five parts. The first part focuses on antiquity. Angenendt begins with a look at the history of religions and the role of sacrifice in historical religions, such as in ancient Greece and Rome and the Old Testament. In moving to the Christian world, the spiritual offering of Christ celebrated by the Christian community is the center. He sees as key issues: the move from freely composed to written prayer; the notion of purity; the development of the Eucharistic prayer as a literary form; and the uniqueness of Christian sacrifice (in contrast to Greek, Roman, and Jewish sacrifice) as unbloody and spiritual. The issue of atonement or expiation is introduced at this point.

Part Two describes the Offering in the Early Middle Ages. This is the section of the book that makes the greatest contribution. The encounter between Christianity and the Germanic and Slavic peoples offers a catalyst for understanding the shift that occurs in the understanding of offering. The late antique understanding finds a reworking in its encounter with these new relationships. In his description of this Romanization of the liturgy, Angenendt differs in his understanding and focus from Yitzhak Hen. In general, Angenendt finds a decisive reform movement, rooted in the missionary endeavors of Boniface and other Anglo-Saxon missionaries.

The Mass is reshaped into private, intercessory form of prayer performed by priests as a personal act of devotion in preparation for public celebration of the Mass for the whole community. It is seen as expiatory for the sins committed by the priest celebrant and the people. The Mass requires that those celebrating it be pure, and so prayers of apology said by the priest are added to the order of celebration. Churches and altars are dedicated and purified, and the number of altars within churches increases for the increasing number of Masses. Mass comes to be celebrated as part of the penance for the forgiveness of sins: a certain number of Masses celebrated to atone for a certain number of sins. The celebration of Mass becomes connected to the offering of money to support the ministry of the celebrating priests.

The author explores the theological changes taking place during the period. Paschasius Radbertus and Ratramnus, both of Corbie, struggle to identify the kind of change taking place in the bread and wine. It is a prelude to a shift in understanding the relationship between the consecrated Eucharistic species and the community of the Church.

Part Three explores the High Middle Ages, seeing it as a time of a new understanding and of scholastic theology. Reform movements are in the air, most conspicuously the Gregorian Reform. The new orders that emerge out of this reform movement, the canons regular, the Cistercians, and the mendicant orders, attempt to bring a new approach to the church and the celebration of Mass, but eventually embrace the connection between the celebration of Mass and the material support of the church by now normal in the understanding of all medieval society.

Scholastic theology of the Eucharist is profoundly shaped by the controversy with Berengarius of Tours. The theology of transubstantiation avoids the hyperrealism that opposition to Berengarius gave rise to. The elevation of the host and then the cup engages the imagination of the laity more than reception of sacramental communion, which is now enjoined once per year (Lateran IV, 1215).

Part Five is Angenendt's conclusion. He reviews the key historical changes and offers several liturgical and theological considerations. His main conclusion is that the reforms of the Second Vatican Council have opened up the possibility of reclaiming the heritage of the late antique Christian understanding of the Eucharist, but that this is a work in progress.

The book is a contribution to liturgical studies, church history, and theology. It brings together large masses of information, supported by quotation of primary sources and, to present the changes in the celebration and theology of the Eucharist over the period from late antiquity to the Reformation, with a conclusion that explores the impact of this history on today's church and its celebration of the offering of the liturgy. The very richness of the documentation may be a problem, since the book is quite long.

Angenendt's command of the sources, both primary and secondary, is exemplary. His judgements are both grounded in his research and sharpened by his own instincts about what is important. Recent scholarship on the Eucharist has generally avoided a deep engagement with the Middle Ages (see for example Paul Bradshaw and Maxwell Johnson, The Eucharistic Liturgies: Their Evolution and Interpretation [Collegeville, 2012] and Bryan Spinks, Do This in Remembrance of Me: The Eucharist from the Early Church to the Present Day [London, 2013]). His analysis and interpretation flows from the great work of the early twentieth century liturgical movement, and is in contrast to more recent interpretations that see the current reformed Roman Catholic liturgy as a break from the past (see Alcuin Reid, The Organic Development of the Liturgy [Farnborough, 2004]).

This book redefines our understanding of the development of the Eucharistic offering by bringing together classic and recent scholarship into a new account. It will require time to assimilate its riches and evaluate its impact on future scholarship. All will benefit from that work.