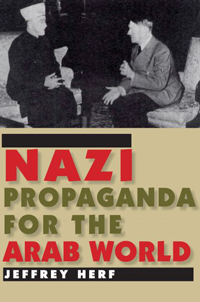 A subject of fascinating debates, the theme of Nazi-Arab collaboration, as well as the so-called "Islamofascism," have received significant attention in the historiography of the Middle East, particularly in the post-9/11 era. In this context Jeffrey Herf, an important scholar of Nazi Germany, sets out to "shed new light on the nature and scope of Nazism's ideological extension beyond Europe". Given the unfavorable condition Berlin was left in after World War II, his only real means of action rely on archival sources and especially on transcripts of radio emissions that were registered and translated by the American embassy in Cairo, to which one may add a partially finished translation of Mein Kampf. His efforts conclude with the publication of Nazi Propaganda for the Arab World, a book which for many became an important contribution to the history of the Middle East although, paradoxically, and as stated in the introduction, "this book documents and interprets Nazi Germany's propaganda". Although Herf tackled the discovered sources in an insightful manner, his conclusions fall in a scholarly sphere noticeably outside his area of expertise.

Jeffrey Herf treats the lesser known aspects of propaganda materials diffused between 1939 and 1945 in an interesting mode. He analyzes the lengths to which Nazi elites were willing to go in order to obtain significant and strategic advantages during World War II. The fundamental idea behind the extensive propaganda campaign directed at the Middle East is well underlined from the beginning: "Whoever loves freedom will, therefore, join the front against England." Anti-imperialist, nationalist, self-defense and conspiracy themes were broadly used by the Nazi propaganda machine. Nevertheless, Herf ponders another propagandistic approach, one aimed at striking a nerve among "Arabs and Muslims": their alleged shared Jew-hatred. The European/German anti-Semitism found common ground with the "radical anti-Semitism rooted in Koranic verses" and their commentaries. He then deduces that the resulting ideologies could not stem from "the pressures of the moment" nor "from past traditions". This perhaps explains his almost complete disregard of Palestine, a topic which in the context of the current book should have been pivotal but also his disregard of the above mentioned "past-traditions". Herf, cautiously continues by stating that such ideologies "built on and broke with elements of their respective civilizations". Thus, Nazi Germany's Arabic language propaganda, he argues, is the product of a "remarkable political and ideological synthesis" of National Socialism, Arab Nationalism and fundamentalist Islam.

One of the limitations of this work stands in the author's treatment of the concepts: anti-Semitism and anti-Zionism. Although chapter two was dedicated to "Defining anti-Semitism" it is still not clear whether a "radical Islamist" can be anti-Zionist, but not an anti-Semite. For our author it seems improbable. In Herf's view the fact that the rejection of Zionism comes from an Islamic deep rooted Jew-hatred is obvious. Furthermore, the fact that Indian Muslims also contributed by funding the propaganda offensive apparently left even fewer traces of doubt. In fact, the chapter was not intended to treat the often blurred distinction between the two terms and the adherents to such categories, for it was the evolution of the term (anti-Semitism) within the Nazi public discourse which was given attention. The Arabic translation of Mein Kampf was modified to match the sensitivities of "the race conscious Arabs". There is however more to this "race consciousness" than was presented in the book, mainly related to Arabs as being Semites and thus inferior in Nazi racial hierarchy. For instance, Hassan al-Banna, among many others, condemned racist ideas, but also the types of "fanatical Nationalism" that was sweeping in parts of Europe. Perhaps for Herf such facts were not worth mentioning. Nevertheless, what was noteworthy in chapter eight's treatment of "Postwar Aftereffects" is the fact that "like fascist and National Socialists, the [Muslim] Brotherhood proposed a program of cultural repression and censorship". The analogy is not supported by any evidence but it does reveal the author's deliberate tendencies.

Herf engages on a path familiar within the historiographical school he is a part of, one that analyzes Nazi-Arab relations, with the latter bloc being apparently embodied by the notorious Hajj Amin al-Husseini- the Mufti of Jerusalem. There should be no doubt that al-Husseini supported the National Socialists, perhaps even the Jewish genocide program undertaken in Europe. However, the fact that the Mufti's rather small circle of adherents was not necessarily representative of all Arabs or Muslims seems to be of little importance to Herf. In addition, the author finds no difficulty in placing al-Husseini among the totalitarian leaders of the 20th century even though he was most likely a figurehead at Nazi disposal.

Jeffrey Herf highlighted the fact that Nazi propaganda gained efficiency in 1941 when the respective group of Arab exiles among which al-Husseini reached Germany and joined the Axis effort. It would have been indeed interesting to uncover to what extent this so called Arab-Nazi venture affected the results of the propaganda efforts. Unfortunately, Herf saves the task of exploring the reception of the "propaganda offensive" for scholars who work on North Africa and the Middle East. One thing is certain though: the propaganda campaign failed. Apart from the rather short Iraqi episode of the pro-Axis coup, no Arab government supported the Nazis and no army of anti-Semitic or National Socialist motivated fighters emerged. Herf is perhaps correct in claiming that such an outcome was made possible due to the German effort's inadequacy in the face of the "Allied military and political counteroffensive". Still, he goes out of his way and prescribes a grim fate to the hundreds of thousands of Jews inhabiting the Islamic world should the Axis be victorious in WWII.

The most unfortunate drawback of Herf's work has yet to be mentioned. As many historians before him, he falls into the trap of presenting a/his vision of an Arab and Muslim world characterized by a sense of homogeneity. Done consciously or not, such an angle might aid a cause, but will not elucidate the stubbornly complicated realities of the area and the Weltpolitik of the time in general as is reflected in other works contextualizing the history of the Middle East and North Africa within global history.

Jeffrey Herf's Nazi Propaganda for the Arab World, at times rather ambiguous and laborious to read, adds a new dimension to the existing scholarship purporting to unveil connections between National Socialism, anti-Semitism, anti-Zionism, Arab Nationalism and, of course, Islamism. However, while the analysis of Nazi propaganda appears thorough and well executed, the conclusions simply fail to convince. Herf, like other historians of this type, is the product of certain scholarly environments, partaker in certain trends and a systematical servant of a cause. The question is where one should draw the line between meticulous research with all implications, and speculations based on selectively analyzed historical elements.