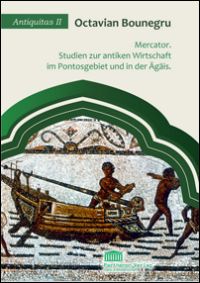 This is a collection of twenty articles, most originally presented as conference papers, on various aspects of commerce and the structure of the economy in the Propontis and the western side of the Black Sea during the Late Hellenistic and early Roman Imperial eras. Most are brief, with an average of ten pages, the longest being nearly thirty pages. They represent the wide-ranging scholarship of a distinguished Romanian specialist in this field. Despite the German title, along with the author's introduction only six of the articles contained herein are in German. Eleven are in French, and three in English. They span a time frame of 1994-2012.

A variety of different types of evidence for trade are discussed by Octavian Bounegru, but his primary focus is on ceramics and also epigraphy. There are several pieces on the pottery works at Pergamon-Ketios, which saw their apogee of production during the second century BC. Bounegru stresses that these sites were true centers of specialized and standardized large-scale production, long before the fineware industry began in Italy and the Roman West, and proposes that the diffusion of this level of organization went from east to west in the Mediterranean (see especially 'Pottery Industry from Pergamon in the Late Hellenistic Period: a Structural Approach', 87-96).

The book also contains several articles that highlight the evidence for shipowners' organizations in the Propontic area, known as corpora naviculariorum or oikoi tōn nauklerōn. There is also discussion of customs regulations, including a first-century A.D. inscription from Mysia Inferior concerning the sale of salted fish at the mouth of the Danube, and a first-century AD document from Histria on the Danube promulgated by the governor Manius Laberius Maximus that granted immunity from these taxes to merchants from that city. Several discussions of naval operations in the same region complete the collection.

Historians of the ancient economy have long been occupied in an ongoing debate concerning its nature, a debate that until the last decade or so was dominated by the dichotomy between 'primitivists' and 'modernists'. Only recently has this begun to evolve into a more qualitative analysis. In several articles in this collection, Octavian Bounegru favors a more modernist interpretation of the Roman economy. One example is the article 'Trafiquants et armateurs de Nicomedie dans la Mediterranée à l'époque romaine' (17-26) from 2006, in which Bounegru describes the evidence for long-distance trading activities of the merchant organizations of that Bithynian city. Although their presence in many harbors within the eastern Mediterranean and northwest Pontic area has been recognized for many years by other scholars, Bounegru demonstrates that this 'polarisation' was not absolute. He cites epigraphic evidence of their activities in Italian ports also, such as Ostia and Ravenna, and evidence of their cargoes such as marble and grain to further illustrate these linkages. Bounegru dismisses older, Finleyesque views that minimized the importance of commerce in the Roman economic world, and looks instead to recent studies of the Mediterranean such as Horden and Purcell's The Corrupting Sea, citing their emphasis on the ["maritime connectivity of microregions"] (26).

This is a good introduction to the ideas and ongoing investigations of Octavian Bounegru, yet there are some issues with this book that unfortunately present obstacles to the reader. While the articles in German are of a fair quality, the pieces in French are not always fully clear in terms of argumentation. The problem is even more acute for the articles written in English, which at times are very difficult to follow. The problem is especially severe in the article entitled 'Pottery Industry from Pergamon in the Late Hellenistic Period: a Structural Approach' (87-96). The author describes herein two types of ceramic production centers, a ["nucleated workshop industry"] and a ["dispersed manufactory"], and states that it is ["almost impossible"] to tell them apart archaeologically (93). However, in the next paragraph, it is stated that the first of these two types ["must be considered as a general model of organization of the production in this period"].

Another problematic piece is 'The Augustan Economy: a Core-Periphery Model' (27-32). Bounegru speaks here of a bipolar configuration between that of the Hellenistic-style merchants' organizations in the eastern Mediterranean, and that of the Roman West, described as one of ["greater mobility and a more strict control by the state over transport activities"]. Bounegru states that the former were ["restricted...especially to the west-Pontic and Aegean regions"], but in the next paragraph contradicts this statement by stating that there is epigraphic evidence for their long-distance involvements. Bounegru distinguishes the parallel developments of the earlier, eastern terra sigillata production centers from those that developed the following century in Italy, but then posits their integration by the end of the Augustan period, in a ["unification of the pottery production, and...by interaction between the great production centres"], without full or detailed explanation (31). It is difficult to tell if these are errors of interpretation, or simply signs of a lack of linguistic clarity, but more careful editing might have avoided such problems.

The work contains a number of helpful illustrations and photographs. Examples include excavation photographs of the pottery workshop at Pergamon-Ketios and drawings of terra sigillata found there, as well as line drawings of mosaics from various locations in the Roman world that depict amphora-transporting vessels.

Overall, this is a fine presentation of the fruits of many years of work, uncovering great complexity in an important economic region of the Roman world. Although mainly of interest to specialists in the Roman economy, its wide-ranging discussion of different types of evidence gives it value to more than one scholarly specialization.