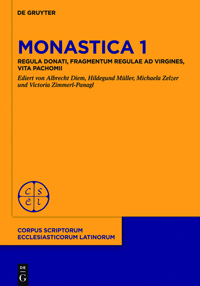 This recent volume in the CSEL series provides editions and textual commentary for two texts for monastic women contained in Benedict of Aniane's Codex regularum. It builds on work begun by the late Michaela Zelzer on the regula of Donatus of Besançon, adding to it fragments contained in the same manuscript attributed to a Regula monialium of Columbanus.

The edition is based on the unique exemplar of the Codex, Munich, Bayerische Staatsbibliothek Clm 28118. This manuscript of the late 8th or early 9th century preserves what are frequently the oldest, and, in some cases the only, copies of significant monastic texts. [1] The texts gathered by Benedict of Aniane in the Codex were the basis for his more popular Concordia regularum (ed. Bonnerue, CCCM 168/168A), which employed relevant selections from the regulae as commentary on the chapters of the Regula Benedicti.

The manuscript was writtten for Benedict himself (Bischoff supposes at Kornelimünster, near Aachen), and is thought to have been given by him before his death in 821 to the abbot of St. Maximin in Trier. There it remained until the secularization of 1803, subsequently passing through various hands until finally coming to the Staatsbibliothek in 1902 through the efforts of the philologist Ludwig Traube and the historian Hermann von Grauert. Since the reappearance of the manuscript it has become the basis for critical editions of several of the regulae it contains, with this the latest example (Holstenius' printed version of 1661, reproduced by Migne, was based on a 15th-century copy of the Munich manuscript and was in no way either a diplomatic or critical edition).

Donatus' regula is a rare textual witness to a "mixed rule." Donatus (ca. 595- before 660), a disciple of Columbanus at Luxeuil and then bishop of Besançon, combined extracts from the Regula virginum of Caesarius, the Regula coenobiorum and Regula monachorum of Columbanus, and the Regula Benedicti. The selections were deployed verbatim and, where necessary, adapted to the feminine gender. Donatus' work can be contrasted to the Regula cuiusdam ad virgines, which though based on the regulae of Benedict and Columbanus was more than simply a compilation of extracts. Donatus' regula thus has additional importance as a textual witness to its source texts. In the case of the Regula Benedicti - for which it is the oldest direct witness - it provides crucial evidence for the early diffusion of distinct textual traditions. Two modern scholarly efforts to produce an edition were never published (Hope Mayo's diplomatic edition, 1974; Ingrid Prischl's critical edition, 1977), and another contains errors that in the editor's view render it unsatisfactory (Vogüé, 1978/80).

The two additional fragments of "Ps-Columbanus" from the same manuscript are included because the first of them was a source for chapter 19 of Donatus' regula. While this was obviously derived from the Columbanian tradition, the second fragment is by all appearances a sermon or treatise on ardent prayer that shows more affinities with Benedict than Columbanus, and bears no indication of being addressed particularly to monastic women.

The edition of each work is preceded by a general introduction, a thorough description of manuscripts and editions, and a detailed textual commentary, constituting almost 75% of the total page count. No translation of the text is provided; there are several available for the regula of Donatus in various languages. The editions have three sets of apparatus: biblical references; a quellenkritischer Apparat with variants from the source regulae; a textkritischer Apparat indicating variant readings of the main text with reference to the manuscripts (Munich Clm 28118 and its 15th-century copies) and the printed editions.

As a help to the reader, the indication of source texts for the Donati regula is provided in several ways: a general listing of sources by chapter of the regula (5-7); lists for each source separately (12, 18, 22); marginal notes within the edition, supplemented by the second apparatus. It would have been helpful to have a master table presenting all three sources in synoptic form, perhaps as a supplement to, or replacement for, the first list.

The bibliography is divided into two sections, preceding each edition.

Given the close relation between the texts, it would have been more convenient for the reader to have a single bibliography in a more obvious location. One lacuna was the omission of Prischl's Regula Donati (Diss. Wien, 1977), which is mentioned in the introduction and notes but absent from the bibliography.

The volume concludes with two indices, of biblical and non-biblical texts. There is no concordance or index of significant Latin words, which would have been a significant help in mining the very rich and often illuminating textual commentary. This is the kind of book likely to be purchased by libraries rather than by individual scholars, and to be consulted as needed for research. This makes the importance of rapid and direct access to its contents even more important. I hope that the presentational complexity of this slim but rich volume does not inhibit readers from benefitting from the substantial achievement it represents.

[1] The complete manuscript has been made available online by the BSB; URL: http://daten.digitale-sammlungen.de/bsb00054966/image_1