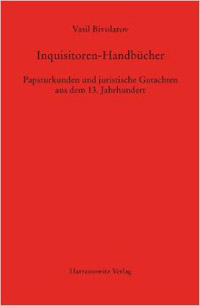 Although the topic 'inquisitors' books' is likely to suggest to the general medievalist the long treatises written by the fourteenth-century inquisitors Bernard Gui and Nicolaus Eymerich, the books actually used by inquisitors tended to be smaller and portable. They were also usually compilations. Their contents? They contained in particular the consilia of lawyers, canons of councils and papal bulls that had responded to or dealt with particular questions and problems about inquisition, and also useful formulae, for example of sentences to be delivered of various penances, such as wearing crosses or imprisonment.

The modern study of these books and their manuscripts started with a fundamental article published by Antoine Dondaine on 'Le manuel de l'inquisiteur (1230-1330)'. [1] Quite a number of the texts encountered in these anthologies were edited, en passant, in Kurt-Viktor Selge's Texte zur Inquisition and Selge's and Alexander Patschovsky's Quellen zur Geschichte der Waldenser. [2] Two editions of Italian inquisitors' hand-books have come from Italian scholars, Lorenzo Paolini [3] and Francesca Lomastro Tognato [4], and there has been a recent surge of work from pupils of Paolini. Along with several articles, Riccardo Parmeggiani has produced a very useful and large book which lists the consilia and accompanies each description with a text (usually reprinting an earlier edition). [5] He has also edited the earliest Italian manual, [6] while Stefania Pirli has edited but not yet published another manual, the De auctoritate et forma inquisitionis. [7] Finally, a recent article by Lucy J. Sackville on 'The Inquisitor's Manual at work' is the harbinger of a more substantial work from her on the same theme. [8] Vasily Bivolarov's book appears, therefore, during a golden age of research and publication in this area. As a work of high scholarship, importance and usefulness it makes the period even more golden.

The book has an unusual structure, one which has been carefully thought out. It has substantial separate parts. There is a list and description of manuscripts and their relationships (ii-iii); a calendar of relevant papal bulls (v); a list of consilia (vi); an edition of the consilium of Guy Foulques (vii); and an account of the organisation and practice of papal inquisitors in the thirteenth century (viii). Although there are links - and the lists in (ii) and (vi) are used in other parts - each part can be used separately and on its own. An example of the autonomy of the book's parts is the life of Guy Foulques. Bivolarov provides a full account of the life in the preface to his edition of Guy's consilium in (vii) (206-213). At the same time, when dealing with Foulques in the catalogue of consilia in part (vi), thinking of the reader's needs Bivolarov has tactfully included a brief biographical note of Guy (192 n. 31).

The book's scope and structure means that it needs a list of consilia. This cannot avoid broadly coinciding with the list in Parmeggiani's book on consilia (apart from nos 30-31 and 38), but Bivolarov keeps it as brief as possible (185-206). He reserves the largest part of the book for his calendar of relevant papal letters (28-185). One of the 192 documents, no 189, is a judgement which Bivilarov discovered, delivered by Nicholas IV orally but preserved in a notarial instrument, while the other 191 are papal bulls. Although they range from Gregory IX and 1230/1231 up to Nicholas IV and 1292, and are addressed to various lands, the majority come from 1252 and later, and relate to parts of Italy.

Part (vii) is very important. Guy Foulques's consilium was not only very influential - it was frequently copied into inquisitors' books - but it is also of exceptional interest. Attention has been drawn recently to the subtlety and penetration of Guy's discussion of the indicia that showed that someone was a believer, credens, in heretics (question 9, ed. Bivolarov, pp. xx). [9] However, until now scholars have had to do with Cesare Carena's seventeenth-century edition, or Lomastro Tognato's (not widely accessible) modern edition of the consilium's shorter version. Bivolarov has remedied this by providing a technically immaculate modern edition. His discussion of the date of composition should be noted (214-217). Allocating the work to around 1255, Yves Dossat represented modern opinion that placed it after most of the important Languedocian conciliar legislation about inquisition and responses to inquisitors' questions had taken place. Bivolarov places it much earlier, its termini September 1238 - August 1243. It is now a text produced at some time during the most fertile years in the development of legislation and consultations in Languedoc. Bivolarov has not only made the work accessible: his re-dating has made it considerably more important.

In the last part (viii), Bivolarov provides a general account of the organisation and practice of papal inquisitors in the thirteenth century. It is synoptic and masterly. It is also necessarily brief (256-310). Consequently the reader sometimes wants longer accounts from Bivolarov. Examples are his disagreement with Henry Kelly and Richard Kieckhefer on inquisition as an institution - they are curtly dismissed in a footnote as 'völlig irrig' (259 n. 17) - and those areas where his account is at odds with Yves Dossat's emphasis on 'crises' in his Les crises de l'inquisition Toulousaine (Bordeaux, 1959). This is not criticism: rather the opposite. With this important book Bivolarov has stepped immediately into the first rank of historians of inquisition. We want to hear more from him.