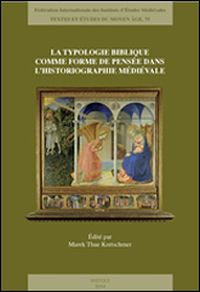 Typology, in the strict sense of the term, was one of the key methods of Christian scriptural exegesis used to argue for the unity of the Old and New Testaments. This collection of essays (six in French, seven in English) sets out to better understand the ways typology, not only as a specific exegetical tool but also more broadly as a Christian way of thinking, influenced the writing of history from the Carolingian period till the later Middle Ages.

After a short "Avant-propos", Marek Thue Kretschmer, the volume's editor and organiser of the original conference held in Bern in 2011, sets out the theoretical framework by asking "Y a-t-il une 'typologie historiographique'?" (1-23) Kretschmer summarizes the major secondary work on typology, from its NT roots through to the major and most influential studies by Erich Auerbach, Friedrich Ohly and Walter Haug. Stress is placed on "semi-biblical typology" (9-13) and "postfiguration" or "imitatio Christi" (13). Many of the subsequent articles respond to this introduction and above all to these specific concepts, primarily because they allow the strict, conservative nature of typology to be side stepped and historical narratives to be linked to the sacred texts.

In the first essay, Francesco Stella approaches the question of historiographical typology through Carolingian poetry, with particular emphasis on the description of the well-known frescoes in the palace of Ingelheim preserved by Ermoldus Nigellus (c. 827), which contain both classical typology as well as a sort of "typologie laïque" designed to bolster Carolingian authority (25-52). Next, Luigi Russo looks at the significance of the Maccabees in Christian literature, beginning in late antiquity but he is concerned above all with the range of meanings that allusions to these "proto-Christian" martyrs could have for different twelfth-century authors (53-75). Sigbjørn Sønnesyn's brilliant contribution balances careful reflection on twelfth-century exegesis with thoughts on its influences on the period's historical writing (77-95). Ecclesiological thought, coupled with the tropological (or moral) mode of exegesis offered a means for both scholastic and monastic historians to connect current events to the Church and evoke ideals of Christian morality in their audiences. Julian Führer then looks at one particular twelfth-century text, Hugh of Fleury's Historia ecclesiastica (97-118). There are helpful comments on the structure of the work, its possible political significances, its medieval afterlife and complicated manuscript tradition, yet even though typology was seemingly integral to Hugh's thinking, it is somewhat underplayed by the author, who ultimately sees Hugh's "répertoire typologique" as unremarkable (113; 106). Jeff Rider moves from Fleury to Bruges and looks at historiographical responses to the assassination of Count Charles the Good of Flanders in 1127 (119-135). In particular Rider analyses the history of Galbert of Bruges, whose narrative emphasised the centrality of the life of Christ for the understanding of recent events, but also more generally how narrative patterns from, and allusions to, the Old and New Testaments helped invest contemporary events with "a profundity they would not otherwise have had" (134). Walter Map's De nugis curialium is the subject of Greti Dinkova-Bruun's essay (137-149). The author takes one particularly biblically themed and typologically rich passage from this complex work to highlight how Map's "sardonic wit" was employed "to invoke hidden and contradictory associations, humorous and satirical denunciations, truthful and not so truthful authorial personifications" (148). Thomas Foerster examines Otto of St Blasien's Chronicle, a continuation of Otto of Freising's that was written in c. 1208/9 (151-166). Biblical allusions and quotations are commonplace in the text as means of explication, but Foerster looks in particular at the crusade of Frederick Barbarossa's and then that of his son Henry VI, in which Old Testament allusions were replaced by New Testament ones, so that the crusade of the father was seen to have "prefigured that of the son" (161). In the figure of Fulk of Neuilly he finds an example of imitatio Christi, though this felt less well integrated into the analysis.

The next two contributions shift the focus from Western Europe to Scandinavia. Sverre Bagge looks at how the Old Testament especially was exploited in Sverris saga (written between 1202 and 1220) and in the so-called Miroir du roi (c. 1250) to parallel the emergent Norwegian kingdom with Ancient Israel as a means to construct royal ideology (167-177). Less persuasive is the argument that recourse to the Old Testament reflects tensions between royal interests and the authority of the Church (174-177). In the following chapter, Jonas Wellendorf explores the use of typology in Old Norse kings' sagas as a way "of thinking about and structuring the past" (179-195). In the Saga of Óláfr Tryggvason by Oddr munk, the achievements of the eponymous hero are seen as preparing the way for his spiritual successor, St Óláfr Haraldson, just as John the Baptist paved the way for Christ (193). More complicated, however, is the engagement with the pre-Christian past: Óláfr Tryggvason also seemed to fulfil the role of the Norse god Thor without complication, but a further episode, in which St Óláfr is somewhat ambiguously presented as the antitype to a dead pagan king, suggests that there were certain connections that some contemporaries felt uneasy about making openly (192-193).

The final three essays, which are on the whole concerned with the later Middle Ages, fruitfully expand the definition of historiography. Roman Hankeln is concerned with historiae, that is, liturgical chants in the Daily Office which were fundamental sources for the recollection and performance of historical narratives, especially saints' lives (197-217). Hankeln takes a terminologically precise definition of typology and differentiates between parallels / analogies and fulfilment proper. Crucially, he finds meaning not only in the texts of chants but also in their music. Moving from music to images, Jean-Claude Schmitt's article deals with one particular manuscript of the Speculum humanae salvationis, an immensely popular text first written in 1324 (219-243). The manuscript consists of a series of typologically related sets of biblical images which tell the story of salvation, from the Fall of Lucifer up until the Apocalypse, as well as illustrate - typologically - core Christian moral themes, such as baptism and marriage. In the final article Lucie Doležalová examines three passion narratives from early fifteenth-century Bohemia, which use Christ's passio in remarkably different ways to record and comment on recent events (245-265). Imitation of Christ's passion could be a way to highlight virtue and faith, but parallels could also be drawn in order to mock and parody.

All in all, this is a valuable and well-edited collection, which, not least through Kretschmer's introduction, remains coherent even though an impressively wide range of sources (many of which will be unfamiliar to non-specialists), disciplines and periods are covered. The presentation is the book is slightly let down by some printing errors (e.g. 35, 38, 43, 187, 195, 203). There are some notable absences. It would have been helpful, for example, to take into account the influence of earlier Christian historical narratives such as Eusebius-Rufinus' Historia ecclesiastica, in which the fulfilment of biblical prophecy in later events had an important function. Furthermore, not all contributors appear to have the same understanding of typology, meaning there is some inner tension concerning where allusion and parallels stop and typology begins. It would be interesting to see, therefore, how theoretical models concerning the limits of typology built from the medieval (and indeed patristic) sources themselves would compare or contrast with those of twentieth-century scholars. This may allow us to get away from conspicuously modern and not always satisfying terms such as "semi-biblical typology" (or even "extra-biblical typology"). A conclusion, in which the range of ideas presented across the book were digested and compared with the literary theorists, would have been one way to begin this task. Nevertheless, the purpose of the volume was by no means to have the last word on the subject. As Kretschmer explains at the very beginning, he hoped the book would "fournir de nouveaux outils de travail qui seront des apports précieux pour tous ceux qui s'intéressent à l'historiographie à l'époque médiévale" (vii). There is no doubt that scholars interested in medieval historiography will at the very least be filled with a desire, if not some of the necessary tools, to dig deeper into this fundamental facet of medieval Christian intellectual culture.