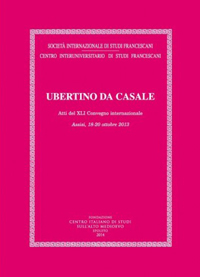 As Marco Bartoli mentions right away in his presentation of Ubertino in historiography - "Ubertino nella storiographia, e oltre" (3-26) - Ubertino never attracted sympathy, not only from his adversaries, of course, but not even from those who spent time studying the man and his work, from Frédégand Callaey to Gianluca Potestà [1], who consider him "as an author verbose and pleased to talk about himself, and at the same time as a shrewd compiler unoriginal" (6). Above all, Ubertino was a strong polemicist, chastising those who, in his opinion, were not faithful followers of the Rule of the Order, particularly with regard to poverty. All is life Ugolino remained an ardent disciple of Peter of John Olivi. Following his master, he considered that poverty was "not so much a legal status, but rather the renunciation of all forms of power" (20). Through all the polemics with the powers of his time, Ubertino shows his fidelity to Olivi, and his longing for a Franciscan order faithful to his founder, and for a Church "poor and for the poor" (25-26), without power.

Marina Soriani Innocenti, in "Ubertino da Casale, fervens praedicator evangelicae veritatis" (83-111), studies the style and the contents of Ubertino's preaching, how passionate he was, particularly in stigmatizing the crimes of the "carnal church" and praising St. Francis - the angel of the sixth seal of the Apocalypse - and the true followers of evangelical poverty.

Carlos M. Martínez Ruiz, "Historia y proceso redaccional del Arbor vitae" (113-147), meticulously reconstructs the stages in the writing of Ubertino's masterpiece, the "Arbor vitae crucifixae Iesu": a first version drafted in 1305-1306 during a retreat at La Verna; then a draft of the definitive version composed in the years following the Council of Vienne (1311-1312), a draft of which we have six manuscript copies of the 14th and 15th centuries examined by the scholar; and finally the definitive version, of which we have seventeen manuscript copies. That definitive version was composed after Ubertino had been transferred by John XXII to the Benedictine abbey of Gembloux in Belgium, between 1326 and 1329.

Riccardo Parmeggiani, "Ubertino e lo Spiritus libertatis" (149-187), studies Ubertino's strong opposition to the movement of the Free Spirit. He shows how upon request of Chiara da Montefalco Cardinal Napoleone Orsini, then the pope's legate in Tuscany, gave Ubertino the task to prosecute members of the Spiritus libertatis, making him an actual inquisitor, and also how Ubertino used that mission to settle some accounts he had with some groups inside the Franciscan Order.

In "Ubertino e le fonti francescane" (189-215), Francesco Verderosa examines Ubertino's use of the Franciscan literature of the 13th century: works of masters like Bonaventure and of Peter of John Olivi, but also writings of Francis of Assisi and writings about him, like the Sacrum Commercium, writings of Thomas of Celano, and foremost the writings (the famous rotuli today lost) of Brother Leo, Francis' companion and secretary.

Paolo Vian's long and detailed contribution, "'Noster familiaris solicitus et discretus': Napoleone Orsini e Ubertino da Casale" (217-298), scrutinizes the relationship of Cardinal Napoleone Orsini with Ubertino and the Spirituals, and the presence and interaction of the Friars Minor in the papal court.

Roberto Lambertini, "Ubertino contro la Comunità: argomenti e posta in gioco" (299-323), analyzes the conflict between Ubertino and the party of the Community in the Order of Friars Minor: observance of the rule, its interpretation according to Nicholas III's bull Exiit qui seminat, and the usus pauper.

In "L''enigma' degli ultimi anni di Ubertino da Casale" (325-402), Alberto Cadili conducts a thorough investigation into the last years of Ubertino's life, after 1325 when he was accused of heresy for defending the positions of his master, Peter of John Olivi, fled Avignon and went underground.

Finally, Sylvain Piron's contribution, "La réception de l'œuvre et de la figure d'Ubertin de Casale" (403-442), surveys the vicissitudes of Ubertino and of his work. The Arbor vitae is still in need of a critical edition, which should be preceded by a rigorous inventory of the manuscript copies.

An index of names (443-465) closes this volume that undoubtedly brings us the up-to-date broad and deep status questionis regarding one of the most controversial figures of Franciscan history.