Abu' l-Fa żl Beyhaqi: The History of Beyhaqi: The History of Sultan Mas'ud of Ghazna, 1030-1041. Volume I: Introduction and Translation of Years 421-423 A.H. (1030-1032 A.D.). Transl. with a historical, geographical, linguistic and cultural commentary and notes by C.E. Bosworth. Fully revised and with further commentary by Mohsen Ashtiany, Cambridge, MA / London: Harvard University Press 2011 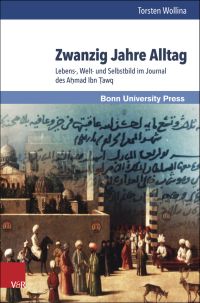 This is a pioneering and the first systematic study of a unique source that survived from the medieval Islamic world. Based on a doctoral dissertation submitted to the University of Berlin in 2012, it explores the diary (entitled Taʿlīq) recorded by Ibn Ṭawq, a Damascene notary (shāhid) who left almost 2000 pages (in the edited format) in which he reported his almost daily routine and a great variety of matters pertaining to wider circles in Damascus as he knew and experienced during the twenty odd years between 1480 and 1502 CE. What he left us is the closest to a personal archive of a medieval Muslim that modern readers may hope to put their hands on.

The first chapter provides details about Ibn Ṭawq and his diary as well as some interesting observations and speculations on the technical aspects of its production. The less convincing part is its discussion in the context of the Tagebuch genre, since, after all, the larger part of data in Ibn Ṭawq's writing is information about Damascus rather than engagement with his own personality. Here Wollina also fails to emphasize that Ibn Ṭawq included in the Taʿlīq hundreds of documents in the drafting of which he was involved or that came to his attention through his acquaintances. This precious material is what makes the Taʿlīq a unique source, less for the personal history it reveals but more for the socio-economic history of his city at the end of the Mamluk era.

Of the enormously rich data in the diary, Wollina chose to concentrate in the second chapter on Ibn Ṭawq himself and his household. Apart from general information on his residence or the stages of childhood (especially male children) and the rituals involved, one learns about private matters such as the death of most of his daughters, some as victims of the plague at a very young age. In this respect the Taʿlīq opens a narrow vista to its author intimate life and his emotional world as exposed, for example, a propos of the circumstances of the birth of one of his daughters and the pains that his wife suffered, or his anxiety and hope when his son enters the kuttāb. Here and there are notes pertaining to his children, their development during their early childhood (e.g., when they were put for the nightsleep in their own bad, or when a tooth came out). Wollina fails to note that out of the eight children born to Ibn Ṭawq about whom we are informed, only three survived. The notary's intimate relationship with the Shaykh al-Islām Taqī al-Dīn ibn Qāḍī ʿAjlūn allowed him to report a great deal also about the family of his revered friend and mentor. His animosity towards one of the two of the Shaykh's legal wives, known as "the Egyptian," comes to the fore and to him she was the villain and the reason for their marital problems. As regards our notary's own marital life, Wollina stresses his wife's somewhat independent status and, likewise, from reports about other married women such as his daughter-in-law and her provocative behavior, concludes about the increased independence of women in that age. However, the factual basis seems too narrow for drawing such a conclusion.

The third chapter treats the source's various occupations and activities and reconstructs the routes of his various itineraries. It also provides information on the non-Muslims and on occasional conversion to Islam, as well as on female occupations (here it should be noted that the author relies on Yossef Rapoport's argument about the increasing participation of women in the textile industry, but Ibn Ṭawq's material surely does not support it). We learn a great deal about meals and food consumed on ordinary and festive occasions, on the campaign against alcohol consumption as well as its lucrative trade, a campaign conducted especially by Sufi groups and involving conflicts with Mamluks benefitting from wine sales. This chapter is concluded with a section on the different costumes and clothing that are mentioned in the diary.

The fourth and last chapter, the shortest in the book, comes back to Ibn Ṭawq in an attempt to evaluate his self-image as reflected in the diary. What emerges is his preoccupations with his health-problems more than anything else that can be of much import as regards his personality. The most one could observe is that Ibn Ṭawq was a sort of hypochondriac.

The merits of the book notwithstanding, one should point out a few errors and misinterpretations. For example, in contrast to Wollina (47-8), Ibn Ṭawq does not mention any brother and the use of akhī should be understood as "the brother of so-and-so." Or, the author maintains that our notary lived in the northern part of Damascus, in the vicinity of the al-Qasab Mosque (48, 101-2) but provides no supporting references for that. At the same time he misses other references to residence elsewhere. Ibn Ṭawq's wife was not a wet nurse (58).The author is not clear if Ibn Ṭawq had a few concubines that bore him children (49,63-4, 66-9); his discussion on that is confusing and derives from his misinterpretation of what the notary meant by the term umm awlād. It is rather clear that his children were from his legally married wife who is referred to as both zawja and umm-awlād. Unlike many of his acquaintances, who had concubines who bore children (e.g., the Shaykh al-Islām), IbnṬawq did not keep a concubine. Why? What does it tell us about his marital life? This remains an intriguing question. The identification by the author of who exactly of the notary's sons married is clearly erroneous and assumes it to be the son aged less than 6 years, who is reported to have consumed his marriage (!) Also, some of the author's speculations are not entirely convincing, such as the sentiments between our notary and his wife (p. 62 and n. 180). The connection between sex and crime (154-5) appears an exaggeration, as crime involved men much more than women. Here and there references to the source are incorrect or one term is explained inconsistently (see Ḥawsh on p. 102 at two places explained differently). Finally, an index and a map (especially in light of the place devoted to itineraries) might have been useful. These reservations notwithstanding, Wollina is to be congratulated for a most interesting study.