James Howard-Johnston: Witnesses to a World Crisis. Historians and Histories of the Middle East in the Seventh Century, Oxford: Oxford University Press 2010 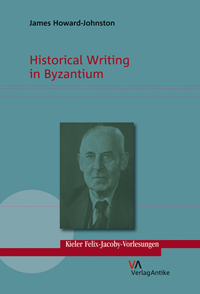 This booklet is an expanded version of the first lecture in a series honoring Felix Jacoby (1876-1959), editor of the fundamental collection Die Fragmente der Griechischen Historiker. Not counting Josef Wiesehöfer's introduction and biographical sketches of Jacoby and the lecturer himself, just fifty-one pages remain for James Howard-Johnston to discuss Byzantine historiography, a subject he makes more manageable by concentrating on the sixth through twelfth centuries, his main area of expertise. Declaring (perhaps wishfully), "Historians handle data - gathering, sorting, patterning - rather than constructing theories" (11), he also limits himself to identifying the Byzantine historians and explaining what they did and how they did it.

First he assembles the roster of Byzantine historians, classifying them as classicizing historians of the recent past (like Procopius), world historians (like George Syncellus), or ecclesiastical historians (like Socrates Scholasticus), while recognizing that some of them belonged to more than one of these categories (like John Zonaras). The discussion is comprehensive and generally accurate, except that "the last few" books of the history of Ammianus Marcellinus are not "lost" (16), and Symeon the Logothete shows no "anti-Macedonian bias" (25) in his own times (when he praises the Macedonian Constantine VII for redressing the sorry state in which the non-Macedonian Romanus I left the empire). In other cases Howard-Johnston takes defensible but questionable positions, like rejecting the manuscript attribution to Michael Psellus of the Concise History (29-30) or supposing that Anna Comnena's Alexiad was largely composed by her husband, Nicephorus Bryennius (31-32).

Howard-Johnston then discusses who the Byzantine historians were. In two italicized sentences, he insists, "Historical writing in Byzantium was a freelance activity on the part of what may be termed the mandarinate" (35), and "The preferred style for a work of history was what we may call the mandarin style" (38). He is right that most (though not all) Byzantine histories were written by bureaucrats, but not that Psellus or Comnena wrote in "the language in everyday use in the Byzantine bureaucracy" (38). Such language can be found in the government documents incorporated into the compilations of Constantine VII, whose style is decidedly less polished than that of formal Byzantine histories. Yet Howard-Johnston is correct that middle Byzantine historians (unlike early Byzantine historians like Procopius) did not really write "classical history" (39), because they included such unclassical elements as biography and ecclesiastical history.

Next he addresses the problem of where Byzantine historians obtained their information about the recent past. Except for the lost histories of Trajan the Patrician and Sergius Confessor, he is inclined not to "follow Treadgold's example [in my Middle Byzantine Historians] in seeking to identify lost writings which may have supplied material to extant texts" (43, note 65). Instead he postulates that historians, apart from their own experiences and those of "well-placed contemporaries," mostly relied on "military and diplomatic dispatches," "government circulars," "encomia," "psogs" (invectives), and "professional story-tellers or minstrels" of the kind who contributed to the epic poem Digenes Acrites.

Doubtless military and diplomatic dispatches were sent, and a few historians apparently used them (e.g., Theophylact Simocatta), but nothing indicates that the government regularly circulated internal bulletins of any kind. The only encomia that survive are funeral orations, which a few historians apparently used (e.g., "Theophanes Continuatus"), and the lone surviving "psog" is Procopius' Secret History, which appears to have been unique (and used only by Hesychius of Miletus, who barely mentions it). The Digenes Acrites contains only vague and hopelessly confused historical references, none of which would have been helpful to a Byzantine historian, and unlike Howard-Johnston I fail to see anything in "Theophanes Continuatus" or John Scylitzes that could derive from a similar source.

I would therefore assign a much larger part than Howard-Johnston does to well-informed contemporaries, to personal experience, and especially to lost histories that depended on their own authors' well-informed contemporaries and personal experiences. Although Jacoby chose somewhat arbitrarily to end his Fragmente with the sixth century, fragments of lost middle Byzantine histories undoubtedly exist. Howard-Johnston acknowledges those of Trajan and Sergius, but the evidence is equally strong that surviving histories and other texts preserve fragments of lost histories by Theognostus the Grammarian, Nicetas the Paphlagonian, Manuel the Protospatharius, Theodore of Sebastea, and several more.

Finally Howard-Johnston characterizes the content of the histories. He terms them "top-down history" (54), "metropolitan and confined to the political and military spheres" (57). These generalizations are true of most but by no means all the histories (not ecclesiastical histories, for example), since, as he notes, "The single most striking feature of Byzantine historical production is its variety" (59). He also gives Byzantine readers credit for favoring and preserving the histories of the highest quality, another generalization that is largely but not entirely valid. (Otherwise we would have, for instance, the full text of Priscus of Panium.)

Some of his judgments of historians seem eccentric, such as his condemning George the Monk for his "limited education" and "bigoted mind" (33) while praising the plodding Theophanes Confessor (46) and the Historical Excerpts commissioned by Constantine VII, whose outlook Paul Lemerle rightly called "profoundly anti-historical" (58). Although conventionally pious and not classically educated, George the Monk obviously worked very hard on his history, consulting many more texts than did Theophanes, whose education and piety were quite similar to George's.

Such a short survey of such a big subject could hardly be wholly satisfactory, but Historical Writing in Byzantium offers an interesting introduction for non-specialists, along with some thought-provoking ideas for specialists.