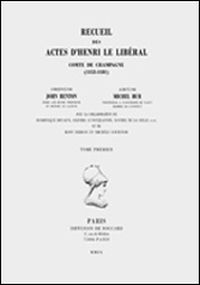 With the publication of this volume, Michel Bur has brought to a close a project whose preparation has spanned decades. The American medieval historian John Benton, who died in 1988, devoted approximately thirty years of his career to collecting charters issued by the counts Henry I the Liberal and Henry II of Champagne. Benton's primary goal was to determine whether it was possible to understand, through legal documents, why the court of Champagne had served as the birthplace of so much important courtly literature in the Middle Ages, including most famously, but not exclusively, Chrétien de Troyes. While that goal proved elusive, Benton did nonetheless succeed in documenting the development of one of the most sophisticated and influential comital governments in France during the High Middle Ages. Benton himself was never able to shepherd this project through to publication, but Michel Bur has done so, at least as far as the charters of Henry I are concerned. In doing so, he expanded significantly on Benton's original research. Specifically, he worked in collaboration with a number of archivists and historians, who unearthed both variant copies of existing charters as well as a few charters that had escaped Benton's notice altogether.

The primary result of this scholarship was the first volume of this pair, published in 2009, which contained 539 charters, dating from 1129 to 1181. This newer volume serves mainly as a complement to the first, adding a few additional details and a fuller scholarly apparatus.

The additional primary documents here are slight. Michel Bur has discovered or else had brought to his attention eleven previously unknown charters, including one very fragmentary document and one known only through references to a later charter. These additional charters are numbered so as to facilitate their integration in the original volume's chronology. The collection also includes new editorial notes on seven previously published charters, based on the recent discovery of further exemplars drawn mainly from eighteenth-century copies. As would be expected, none of the newly discovered charters is especially groundbreaking. They show Henry the Liberal, as before, settling disputes between laymen and churches, confirming donations to churches, and offering gifts and liberties to churches himself - including, for example, a portion of the tolls collected and cloth sold at Provins. With a total of 550 charters now published (49 more than Benton had assembled before his death), it is now possible to know the workings of the court of Henry the Liberal in remarkable detail.

This second volume additionally includes a short essay on sigillography by Arnaud Baudin. Henry made use of three different seals at different points in his career: one before his accession to office, with which he signed himself as the "son of Count Theobald", another between 1152 and 1176, and a third during the remaining five years of his life. Baudin provides thick descriptions and photographs of each of the seals - though evidence for the final seal is fragmentary and can only be represented through a reconstitution idéale. In addition to the descriptions and to a detailed inventory of how the seals were used with which charters, Baudin offers an engaging description of the art of sigillography more generally, which should prove useful to non-specialist readers.

What makes this second volume an essential acquisition for libraries that have already purchased the first volume, however, and that will make it essential as well for students of the county of Champagne and of the workings of medieval French government more generally, are its indexes, of which there are three. First, Bur has assembled a short index of all of the recipients of the charters. Second, the volume contains a full index of all the proper names that appear in both books, including people, geographic locations, and ecclesiastical institutions. Third, there appears a remarkably comprehensive index of common words that occur in the charters. The legal terminology of Champagne, the types of goods traded and taxed, the structure of government, and ideas about marriage, kinship, liberties, and servitude are all readily accessible, referenced by page and line numbers. With the publications of these indexes, this collection of charters has become the essential research tool for students of French medieval history that John Benton originally envisioned it as being.

It is especially appropriate that the government of the county of Champagne should receive such a magisterial treatment. Not only was it the site of some of the most creative and influential thought about courtly culture, it was also one of the most important centers of governmental innovation. In 1172, under the same Henry the Liberal who issued these charters, the foeda Campanie were also assembled - a list of the fief-holders in the county along with their military obligations and the first known example of its kind in France. The markets of Champagne, carefully nurtured by Count Henry, were also crucial to the rapid economic expansion of the twelfth and thirteenth century. The two volumes of this collection together give students and researchers remarkably immediate access to this world and to the mechanics of the champenois court during the years of its greatest innovations. Its publication after approximately half a century of labor is a tribute to John Benton, Michel Bur, and to the wider scholarly community that assisted in its completion.