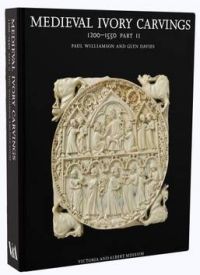 If we were to draw a diagram, tracing the trend of interest towards ivory sculpture, the latest decade would certainly show a noteworthy peak. During these past few years the catalogues of important collections have been published, research has proven its state of health both in conferences and in exhibitions, and the database of Gothic ivories of the Courtauld Institute of Art [1] has certainly contributed to strengthen the ranks of new-generation specialists and to help build connections among these scholars.

If, on one hand, studies are evolving continually, on the other, the elegance and scientific updating standards remain strongly anchored to the publications by the Victoria and Albert Museum. These consist of three catalogues illustrating the complete ivory collection of the museum. The first, dedicated to ivories dating back to 400-1200, was published in 2010 by Paul Williamson; the museum's Baroque ivories were studied by Marjorie Trusted, whose catalogue appeared in 2013, while the last major catalogue was published in 2014: Medieval Ivory Carvings. 1200-1550. The authors, Paul Williamson and Glyn Davies, explain that: "the date bracket 1200-1550 encloses a coherent, if not homogeneous, period usually defined as Gothic. The end date is marked by the arrival of the Reformation in most of Northern Europe during the second quarter of the sixteenth century" (19).

The catalogue consists of two volumes and 289 entries and includes many previously unpublished ivories. The collection is organized according to typological criteria: sacred objects are separated from profane ones and the two volumes are divided consequently. Within each volume, the works are ordered by object type and chronology: the ivories with religious functions or iconography are divided into statuettes, polyptychs, diptychs etc., while profane ivories are divided into mirror backs, combs, gravoirs etc. This division allows the reader to easily perform comparisons between works belonging to the same type, while the choice is less functional for investigating works from a specific workshop or for observing the stylistic developments of ivory sculpture in a given chronological moment or geographical area. For example, in order to reconstruct the corpus of Venetian ivories of the Museum, which consists of masterpieces such as the polychrome triptych (cat. 64) as well as more common plaques (such as cat. 179), the reader is forced to consult the various entries in different parts of the catalogue. But a specific section - more than thirty entries - is dedicated to the works by the Embriachi workshop and the authors express their awareness of the arbitrary nature of their organizational choice, which was deemed more appropriate for a rapid consultation of the catalogue and, indeed, uses roughly the typological divisions introduced by Raymond Koechlin in his 1924 study: Les ivoires gothiques français. The authors also state: "We hope to have avoided this pitfall [i.e. the division between religious and profane ivories often produced by the same atelier] by cross-referencing where appropriate" (19).

Each section is preceded by a brief text and the entries expose both the formal and conservative aspects of the ivories with analytical completeness and in a concise style. The methodic tendency of the book is to opt for moderate caution when making statements regarding the localization of non-Parisian ivories. In this regard, the critical position of the authors is clear: "It is not the intention here to provide a survey of Gothic ivories, but the results of numerous other articles on various aspects of the subject [...] have been taken into consideration in the relevant catalogue entries; and it is the hope that the latter will thus be useful as a summary of the state of knowledge on the different categories of objects" (16). A useful element, also in relation to studies on other ivories and other collections, is the presence of information regarding the provenience and later passages of property of each ivory. Furthermore, the index of names at the end of volume II allows transversal readings and researches in the text. The new photographs, by James Stevenson and Christine Smith, often reproduce the works in their actual size, with different views and seductive details.

A series of new readings are offered to the scholarly discussion, while others are officially confirmed. The catalogue confirms the attribution of the Crucified Christ (cat. 26) to Giovanni Pisano, refusing the proposal to identify its sculptor as Marco Romano, formulated by Sabina Spannocchi in 2010. [2] The attribution to Venice of the Aldobrandini Crozier (cat. 152) and of a series of coherent reliefs is also confirmed, even if further documental studies are probably required to prove the in loco activity of bone and ivory carvers. In particular, the Venetian diptych with the Dormition and Coronation of the Virgin (cat. 106), along with the comparisons presented in the text, can also be related to a diptych in the Galleria Estense in Modena which, although less elegant, presents the same iconography and varietas in terms of architectonic decorations. Some groups traditionally created for organizing ivories in homogeneous series are now broken or considered not convincing, such as the 'atelier aux visages caractérisés' and the 'Berlin Master' (cat. 86). An important corpus is instead linked to the 'atelier du Christ Juge', formerly discussed by Danielle Gaborit-Chopin and now re-proposed with some important inclusions and reassessments (cat. 73-76). A high-quality diptych (cat. 75) is strongly related to this group, dated around 1300, and examined together with the problematic diptych in the Thomson collection: if accepted as genuine, the latter must be considered to be the head of the whole series and presents numerous comparisons with the diptych in the Victoria and Albert Museum, that is also to be considered part of the central production of the 'atelier du Christ Juge'.

A significant critical contribution can be found in the renewed discussion regarding originals and imitations. If many works are rehabilitated, a strong division is also established between models and copies. This process mostly regards ivories dating back to the late XIV century - early XV century, which were never previously involved in a systematic study and punctual system of comparisons. Let us quote the pierced panels featuring romantic scenes (cat. 231) that compose a homogeneous series with those in the Bargello in Florence and in the Metropolitan in New York and which had been previously attributed to France or England, or even dismissed as forgeries by Jaap Leeuwenberg in 1969 [3]: here, they are finally presented as disassembled parts of the same casket, attributed to France (Paris) and dated to the second half of the XIV century.

As part of the Museum's scientific program, seventeen ivories have been subjected to radiocarbon testing, especially the ivories presented as forgeries by Leeuwenberg. His group is now officially dismantled, with profound consequences also for the other ivories held in different Museums. Of course the radiocarbon testing alone is not sufficient to date the carving, but simply proves the ancient nature of its raw material: although the radiocarbon confirms a medieval dating for the head of a Crozier with the Virgin and Child and the Crucifixion (cat. 154), the stylistic features lead the authors to define, in a dubitative way, the relief as "Fourteenth or Nineteenth century".

The catalogue also includes modern productions alongside the originals. A reflection on forgeries and copies is fundamental not only to understand nineteenth century collecting, and to measure the circulation of ivories, but also to widen our view on a far less delineated phenomenon: alongside "actual" fakes, often betrayed by naive iconographic or formal compositions (cat. 242), we also find neo-gothic creations (cat. 252) and copies realized in ivory or other materials for didactic purposes and to complete specific collections.

The photographs from the catalogue will be accessible on the website of the Museum, thus making this information widely available to the scientific community in order to stimulate ongoing dialogue and updating processes. The catalogue, in conclusion, poses itself as an essential tool and sets new standards for futures studies.