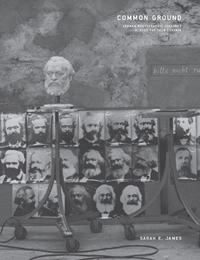 Impressions of East and West German culture have traditionally dwelled on difference and opposition, most familiar in the wooden, heroic figures of East Germany's Socialist Realism, an easy foil to the abstract art developed in post-war West Germany. Of course important aesthetic and political differences influenced state-mandated culture on either side of the Iron Curtain. Nevertheless, a closer look at the ways that a shared pre-Cold War culture and history influenced both Germanys, as well as the ways artists in both countries grappled with state ideology and national identity, illustrates how German-German culture proceeded in parallel and often overlapped. Sarah E. James explores these confluences in her fascinating book Common Ground: German Photographic Cultures Across the Iron Curtain, which evaluates East and West German photography in terms of their similarities, and even mutual or co-constitutive development.

James grounds her text in the photo essay, a genre characterized by serialization, juxtaposition, and dialogical viewing. Her definition of the photo essay develops across four decades of case studies, which "make clear how social and political forms of experience and knowledge can be articulated photographically, how different models of photographic seeing and the social relations suggested by them can put pressure on the relationship between individual and collective identity; between the private and public; between the subject and the object; the past and the present" (237). Moreover, James places East German examples in dialogue with the West, both in theory and practice. These framings make East German photography more familiar and allow it to move beyond state ideology into the more ambiguous territories of aesthetics and form.

Five chapters, an introduction, and an epilogue divide Common Ground chronologically, with equal attention to either Germany. James flips between West and East Germany to demonstrate how political changes translated into photographic projects across historical and ideological divisions. In her first chapter, she uses Bertolt Brecht's Kriegsfibel (GDR, 1955) to exemplify how interest in using the photo essay as an instructive and political tool survived its propagandistic uses in the Nazi-era. A distinction between Brecht's communist project and Edward Steichen's blockbuster photography exhibition The Family of Man (USA, 1955) comes to the fore in Chapter Two where James examines Karl Pawek's Was ist der Mensch? (FRG, 1964). Like Brecht, Pawek disavowed singular interpretations of photography, but nonetheless embraced its documentary (i.e. objective) potential. Chapters Three and Four consider how East Germany's Evelyn Richter and West Germany's Bernd and Hilla Becher used serial photography to critique hegemonic visions of photography and national identity. James concludes her in-depth analyses in Chapter Five, which argues that Rudolf Schäfer's Totengesichter (GDR, 1979-81) used death as the ultimate detachment from the political dictates of the East German state. By this point, the photo essay had become a nebulous, even anti-idealistic form for both East and West German photographers. This argument is summarily distilled in a short epilogue, which looks at Michael Schmidt's Ein-Heit (Germany, 1996) as a post-wall pastiche of German visual culture and text that allows for anything and nothing to make meaning.

Common Ground's movements across the decades of the Cold War draw corollaries between photographers in both Germanys to highlight a shared aesthetic invested in documentary photography as a tool to visualize and debate social issues. Its examples highlight the tensions artists had with the official cultural politics of the German state(s). Even examples that will be more familiar to a Western readership - as in the Family of Man exhibition or August Sandner's Antlitz der Zeit (Germany, 1929) - receive fresh interpretations, which dialogue with the post-Nazi and Cold War anxieties of lesser known East German projects.

The depth of James' visual analyses and historical argumentation can hardly be overstated. This is a rich text, challenging not only in theoretical application but also in the descriptions of images, which submerge readers into a beautiful paradox of language: "The Bechers' images are a strange kind of portraiture, their subjects redolent of industrial families posing for the camera [...]. In each image, the distanced comparative perspective miniaturizes forms and featureless sky frames each architectural type, as if the objects were cut-out silhouettes or specimens pinned onto card" (153). These evocative phrasings complicate even the most familiar images, modeling the complex seeing James posits as fundament to both East and West German serial photography.

James' descriptions of the public sphere (particularly rich in her chapter on Pawek and Steichen) and artists' ambivalent relationships to state orthodoxy in the West are robust and add new dimensions to this history. She introduces similar details about a less familiar East German reality through the photographs that Richter took of the East German public, especially when she compares them to covert Stasi surveillance. This discussion compels the reader to wonder how the overt presence of a camera functioned in the East German public space. How was a person wielding a camera considered? As a threat? A hobbyist? An artist? Questions likewise linger with regard to the role that membership in East Germany's artist union played for photographers like Richter and Schäfer, whose autonomous and obviously state-critical projects contradict a typical vision of what was indeed permissible. In her pathfinding book, James attends to this ambivalence and highlights the uniqueness of her case studies, drawing her reader even further into analyses that welcome - and clearly warrant - more engagement. Indeed, Common Ground shows how quickly bias and prejudices on East German art and culture crumble when due, if delayed, attentions are finally paid them. The difficulties of pursuing this kind of research likewise involve the paucity of comparative texts on East and West German visual culture, particularly in English. This book faces these challenges vigorously, offering an engaging and well-informed argument that dives deeply into a set of dynamic case studies. Common Ground will surely stand as a groundbreaking text for East German art history and visual culture for many years to come.

As a study that provides new analyses on Cold War German art and photography with links to pre-WWII German culture, Common Ground parlays with a stalwart art historical conversation and introduces new examples that move this important and popular discussion beyond a familiar West German frame. By paying equal attention to both Germanys, it commands a fresh approach to evaluating Cold War cultures in dialogue. Because critiques of capitalism / neo-liberalism and its influence on global world culture in the post-socialist era have risen to the fore of scholarship since the 2008 global financial crisis, James' text and its East-meets-West framing have clear contemporary relevance. This book should become a new standard in courses of German art history and visual culture, especially as the Cold War narrative increasingly explores the East Bloc. That it will inspire further research into this neglected field is guaranteed.