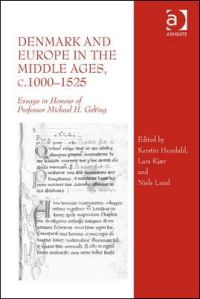 It is a positive event to find, chronologically on top of subjects treated in this festschrift, an introduction to a classical problem of the Danish language development around the year 1000, one not too far from Gelting's historical outlook. In "The Transformation of the Danish Language in the Central Middle Ages: A Case of Europeanization?", Niels Houlberg Hansen (111-137) argues in support of a German-European influence upon the Danish language as the explanation for its change in a crucial period of beginning Scandinavian-European cultural contacts on a Christian basis.

What follows is proof of the extent to which Gelting has inspired historical research in high medieval history. The XIth to XIIIth centuries constitute the framework for discussing byzantine style details in early Danish crucifixes (Ebbe Nyborg, 27-42), for ethos, hagiography and morals in the crusading robber and thief Thomas de Marle (Thomas Kristian Heebøll-Holm, 237-254), historiographical issues of the Valdemarian age in connection with the use of history among the Scandinavian generations of that age (Lars Kjær, 255-268) and the curious story of how archbishop Eskil (1137-1177) lost a great sum of money that he had deposed amongst the Victorines of Paris (Mia Münster-Swendsen, 91-109). An enigmatic liturgical fragment containing the names of St Aldegunde and St Cyprian gave Steffen Harpsøe (77-89) the chance of recalling to memory this group of sources, although this "the tiniest of evidence" does not allow for any particular conclusion.

We get an indication of Gelting's fundamental rethinking of Danish provincial laws and their final manifestation as Jyske Lov by studying the group of weighty legal studies of this festschrift, starting with the contribution of Helle Vogt (203-214) in which she presents a greater perspective to some of Gelting's scholarly achievements, and Kim Esmark (11-26) who is drawing highly relevant information out of the alternation between legal process and compromise in some selected charters. Clarifying if not yet worked out in details is the system of provincial laws as lined up by Per Andersen (183-201) which seems basically convincing, as it takes into full consideration the law manuscripts in order to establish the relative chronology of the provincial laws. A positive contribution on the Church Law of Scania by Bertil Nilsson (157-182) may serve as a well needed complement to Vogt, Esmark and Andersen, just as the interesting study on Prince Jaromar II of Rügen by Kerstin Hundahl (269-285) may be read as a story of how practical politics is dependent upon but intertwined with legal developments that may change the reputation of a prince from one epoch to the next.

Gelting has made primary source studies on Savoy in the XIVth century and some studies on late medieval history and culture of this festschrift refer to this fact, first Per Ingesman (215-234) who takes up the old praiseworthy line in Danish research on the Vatican registers and on the struggle of temporal and ecclesiastical authorities for control of the nomination of church dignitaries and offices. Then there is the new beginning performed by Johnny Grandjean Gøgsig Jakobsen (59-74) on the coming of the Dominicans and their preaching order to Scandinavia from the 1220's onwards, where he, following research traditions from Copenhagen as well as Aarhus and Odense, is about to fill a gap in the study of the religious orders in medieval Scandinavia. His present study deals with the effect of the Black Death of c. 1350 on the Dominicans. Highly interesting is the study by Carsten Jahnke on the travels of King Christian I (1448-1481) and Queen Dorothea to Pope Sixt IV for permission to establish the University of Copenhagen. The previous idea we had of the background to these events will have to be thoroughly revised. In conclusion Agnes S. Arnórsdóttir (43-58) picks up the question, if there are sources to prove that the devotion to St Mary and St Anna - Jesus' grandmother - that spread so widely in what we call the late Middle Ages, did in fact play a role in medieval Iceland by giving the two saints a place as maternal mother models there.

As a whole, the festschrift fulfills beautifully its task of being a flower gift to Michael H. Gelting whose efforts for historical research and for the historical disciplines are admirable. At the same time, it contains several contributions of high quality as points of reference for further research. A division of a festschrift in chapters does not belong to the genre, however. Each single essay ought to remain in its own right and quality.