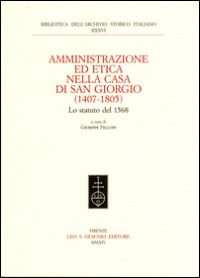 Giorgio (Giuseppe) Felloni has published a volume that includes an anastatic reprint of the Casa di San Giorgio's statutes, first published in 1568. The Casa di San Giorgio (1407-1805) managed the public debt of the Commune (later the Republic) of Genoa, holding at the same time functions similar to those of a modern central bank (1407-1444; 1530-1805). As Felloni reminds us, only the Bank of England in 1694 reached such a complex level of financial organization (3).

Felloni's work on San Giorgio is very well known in Genoa since he dedicated the last three decades of his life to the production of a huge archival inventory of San Giorgio's archives. That was a massive archival campaign he bravely conducted alone with the support of the Archivio di Stato di Genova. As well as the now recently finished archival inventory - online at www.lacasadisangiorgio.it - provides useful information and analysis on San Giorgio, the Introduction (pages 3-33) at the Statuto del 1568 is a sort of useful guideline both for those scholars who do not know anything on the Casa di San Giorgio and for more experienced researchers accustomed to Genoese history and to its huge amount of sources.

The Introduction is divided in two sections; the first contains a detailed explanation of the most important functions of San Giorgio during that time, the second is a description of the 1568 statute. Since also the statute defined San Giorgio's functions, part one and part two together create a tension. While the first describes some of San Giorgio's more relevant transformations in the long run, the second focuses on one particular moment, the year 1568, looking at the same characteristics reformed by that law, the Statute. The first describes San Giorgio's institutional attempts to change its structure, while the second shows to the reader one of the moments in which - according to the author - those attempts finally solved some of the institutional problems of San Giorgio.

Framing the Introduction with this partition and with this perspective, Felloni chose one moment of the history of the Casa as one of the most representative for its four centuries history; he projects San Giorgio's history onto one relevant episode. Based on his long archival research of San Giorgio, this moment seems very well chosen.

Coming to the methods of Felloni's research, what follows is interesting: he was able to locate in the huge documentation of San Giorgio's archives various sources - memoriali, indexes, lists etc - that retrospectively provide useful insights about the history of the Casa di San Giorgio. Although this method can be - generally speaking - risky, since it can deform our perception of the past, Felloni's knowledge of San Giorgio's archives has resulted in interesting discoveries. The 1568 statute - for example - probably permitted him, together with other sources, to draw a complete organogram of San Giorgio's offices. [1]

The first part of the Introduction describes how the fifteenth-century Casa di San Giorgio built a financial infrastructure for the management of the public debt. San Giorgio originated from the earlier forms of debt, the compere, that is, single amounts of debt held by groups of private investors. Felloni provides information about the system of the shares and their earnings. The commune sold his rights to San Giorgio in exchange of credit. San Giorgio paid back its creditors with the revenue obtained by the tax profits. Since the cash was not immediately available San Giorgio built a system for a secondary market of shares and their earnings that were usually sold at a discount. This system was trust-based. Felloni explains how the delays affected the trust and how San Giorgio attempted to reform the system in 1463 and in 1519.

His description of the history of the early compere and their progressive consolidation is a way to explain San Giorgio's peculiar characteristics. More than other institutions in Italy (the Florentine Monte, the public debt in Venice) or in Europe, San Giorgio was a corporate public debt. In a different way from other forms of public debt, San Giorgio created the consensus of the creditor; the creditors themselves, together, became an institution. Moreover, this kind of financial trust was extended from the principal group of creditors to the secondary market. San Giorgio provided the institutional framework to continue the transactions in a more disseminated way. Merchants, artisans and various areas of the Genoese society exchanged the shares of the earnings (the paghe) to conduct their business.

Part two focuses on the statute of 1568. It regulated various aspects of San Giorgio, its offices, the compere and the tax profits (the gabelle). The rules were quite complex, covering all the specific areas of the financial sectors of San Giorgio. Felloni's Introduction does not provide quantitative data to show how, after the 1568 Statuto appeared, the earnings were paid on time. However, putting the second part of the Statuto after the first - which insists on the delays for San Giorgio to repay the creditor's earnings and its fallacious attempts to reform its structure - he shows in detail many rules that regulated the earning payment and implicitly emphasizes the efficacy of the 1568 reform. These rules perhaps changed the system and perhaps the payments were made on time.

Together with the wonderful online inventory of San Giorgio's archives, the Introduction to the Statuto del 1568 will provide scholars who wish to start new research projects with a very useful guide.