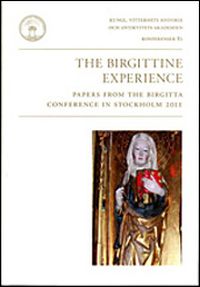 These conference papers cover a wide range and the volume in its entirety may only appeal to the most committed Birgittine scholars, but most medievalists concerned with northern Europe in this period will find something of interest. There is a recurring problem with missing illustrations which the editors ought to have spotted, but the book is attractive, the lay-out clear and the images which are present are of good quality.

Two papers concern Birgitta herself. Maria Husabø Oen looks at her understanding of her own visionary experiences in the context of late medieval changes in "visionary culture", and of other laywomen who had visions. Emilia Żochowska compares the imagery used by Magister Mathias of Linköping in his work Homo conditus, a manual for preachers, with that used by Birgitta in the Revelations, suggesting that not only were Birgitta's visions influenced by her confessor's imagery - the influence was a mutual one.

Leena Enqvist looks at Syon as a textual community, united by a set of normative texts, and uses the 15th century Additions for the Sisters as her source. These contain lists of faults to be avoided and punishments to be meted out, and were specific to Syon. A chapter of faults was held weekly in Birgittine institutions. Community members confessed publicly to faults, and received punishment - also publicly. Enqvist examines categories of faults and argues convincingly that the greater proportion of the most serious concerned communication and social relations, and that the type of punishment given reflected the importance of social relations within the community.

The only archaeological paper is by Stuart Forbes, who writes with admirable clarity on the burials of the sisters and brothers in the Abbey church at Syon. He connects a written source (the Syon Martiloge) with the finds, and draws conclusions which are particularly interesting on the subject of the sweating sickness which attacked Syon first on the men's side in 1488. He suggests that the monastery knew enough about contagion not to re-use the graves of those who died for the next twenty years.

Corine Schleif and Volker Schier edited the correspondence of the nun Katerina Lemmel of Maria Mai in Maihingen, which both take as their starting point. At her arrival as a widow in 1516, the cloister was incomplete and unenclosed, but her connections and business experience enabled her to find donors and commission stained glass panels. Schleif concentrates on these and on the daily use of the cloister. Since Maihingen peasants revolted in 1525 and destroyed the windows, what we know of them is limited to Katerina's descriptions. Although Birgitta prescribed church windows "containing no figural imagery and glass not exuding bright colours", Katerina and the convent appear not to have felt restrained by this. Volker Schier concentrates on the Friday procession, and examines the three extant processionals for the use of Maihingen. He makes a good case for the introduction of a new liturgical use there in 1499, and for the nuns taking "control of their cloister, moulding it so that they were able efficiently and piously to perform the processional liturgy" (282). He suggests that the new (imported) liturgy will have been reworked by those who performed it, and appends a table comparing the contents of the three Maihingen processionals with six MSS of Vadstena origin and two Stockholm fragments.

Kersti Markus's paper is on the Pirita convent in Tallinn, its large number of founders, its "headstrong" approach to local authorities and its imposing building style. Her images are good, but one is absent: she draws a convincing architectural parallel to the Tallinn Town Hall. A photo would have supported her point, but none is offered. Here this is only a minor irritation; in other papers the absence of illustrations are more of a problem. Søren Kaspersen argues for the existence of a Vadstena school of wall paintings, comprising about eighty decorations, with a shared group of subjects from Genesis echoing Birgitta's Revelations. He sees strong connections with motifs in miniatures in a psalter written circa 1450 in the Birgittine convent of Munkeliv in Bergen in Norway and also reflects interestingly on the craftsmen, their connection to the convent, and on what determined the programmes of the different workshops. However, he clearly intended to include 19 illustrations which are numbered and referred to in the text, but which are not present. Angela Kappeler writes on the history of the Birgittine "linen crown". Unusually for a monastic constitution, the Regula Salvatoris gives clear specifications: a crown made of strips of white linen with five blood red linen droplets, worn over a black veil. She includes ten good images of head coverings from other orders for comparison, arguing that the Birgittine one is an innovation. No image of it is however included. Numbers in brackets which turn up in the text without explanation point to an intention to do so (137; 142). A separate problem is that a website referred to in some footnotes, no longer works.[1] Both problems detract from the article itself, which is otherwise excellent and includes an excursus to Altenberg and the intriguing story of the forgeries of Prior Petrus Diederich, the non-beatification of Gertrud of Altenberg, and the problem of dating the Altenberg altarpiece in view of that information.

Other contributions are largely text-based. Roger Andersson gives an overview of the principles and practice of textual editing in Sweden from its origins to the present day. He then outlines the plan for and reasoning behind a new Swedish edition of the Revelations, to consist of a printed edition with one base text, and a website where all the extant Old Swedish manuscript versions are fully digitised, transcribed and commented on. A list of these is appended.

Ingela Hedström's paper begins with a clear and instructive introduction to the Lucidarium, the Customary of the Birgittine sisters, of which five medieval manuscripts are extant (but which seems never to have been used at Syon). She looks more closely at three of these, and makes a good case for the oldest, the only extant Swedish text, having been translated back from a now lost Latin version of the Swedish original. The scribe was the Vadstena nun Christina Brask, and some features of the script of the only extant Latin version (a fragment of eight leaves used in the Naantali area) show a direct connection with Christina.

Veronica O'Mara examines in detail the two extant Middle English manuscript lives of Birgitta, and the (longer) early printed version. She shows that to the "ordinary" late medieval English public Birgitta was presented not as an outsider, a "great rebuker of the pope, and of his filthie clergie", as John Foxe would later have it, but as a naturalised homely insider, a role model for devout Englishwomen.

The Stockholm and Helsinki fragments collections figure prominently in the volume. They originate in material brought together in Sweden after the Reformation, when Gustav Vasa's bailiffs began re-using bifolia from pre-Reformation texts as wrappers for their accounts. Accounts which had reference to Finland were shipped to Helsinki as a result of a treaty with Sweden in 1809. The over 9000 wrappers were separated from the accounts on arrival and now form the fragment collection in the Finnish National Library. Ville Walta's paper gives interesting insights into the complications involved in establishing which fragments were connected with Naantali. This must have been a centre of literacy of some importance, but few books from there survive.

Anna Wolodarski looks at the fragments in a Swedish context. The dispersal of the Vadstena book collection began before the dissolution in 1595. Books in small formats and on paper survived; larger volumes were dismembered. Liturgical books fared badly. Wolodarski lists the Vadstena ones already identified from Swedish National Archives fragments, noting the criteria employed. In Sweden accounts and wrappers remained together, helping identification. Since hands with very formal models are difficult to distinguish, she chooses her words carefully, but on palaeographical grounds links three liturgical fragments to a group of definite Vadstena ones.

Nils Dverstorp has found possible evidence of commercial book production at Vadstena. He argues persuasively for two MSS having been written by the same scribe at about the same time, so in the same scriptorium. One is a vernacular devotional text well suited to a Birgittine context. It has no Vadstena pressmark, so could not have come from the brothers' library, but would fit with the sisters' side. The other is a legal MS with the town of Arboga as its sole provenance. Dverstorp's view was supported by his discovery during the conference of a third, slightly later specimen of the scribe's hand in a Swedish National Archives fragment of Birgitta's Revelations.

In the final paper Jonathan Adams writes on East and West Scandinavian language mixture in a Vadstena manuscript of the Revelations from the early 15th century. The process of turning PhD material into a small format may be to blame for some sweeping statements and unanswered questions. Adams identifies more scribal hands (four) in the manuscript than have previous scholars. Two of those stints are too short for him to apply his test for binary (East or West) diagnostic linguistic features. He submits his results for the other two to statistical tests and finds that a high occurrence of one eastern form does not automatically result in a corresponding high frequency of others. There is a similar lack of correspondence for western features. The prevailing view is of a dialect continuum in early 15th century Scandinavia, and Adams's finds support that.

Series such as this often have a limited distribution, but that is less of a problem here: the Academy is clearly not worried about its part of the copyright - a number of the papers are also available on the websites of the individual authors.

[1] The website http://www.sanctabirgitta.com was not accessible in March or April 2015. I eventually found what appears to be a related Swedish sub-level ("undernivå") for the Sancta Birgitta Klostermuseum, dated 2003, but this had no reference to the Birgittine habit.