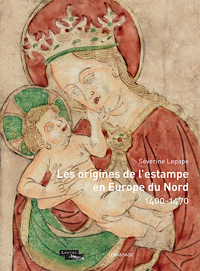 This essay collection accompanied an exhibition of the same title at the Musée du Louvre, organized by the museum and the Bibliothèque nationale de France and curated by Séverine Lepape of the library's department of prints and photography. Although modest in scope and format (190 pages), this beautiful volume offers a succinct summation of past and present scholarship on early printmaking. The authors reexamine familiar issues and objects but also offer fresh insights and discoveries through their examination of a variety of single-sheet prints, ranging from anonymous woodcuts (that dominate the period) to engravings by artists such as the Master E. S. and Israhel van Meckenem.

The first of Lepape's four essays is a historiographic overview of specifically French contributions to the study of fifteenth-century printmaking. She begins with the collecting efforts of Michel Hennin (1777-1863), who acquired many early woodcuts and engravings in Germany as a result of the secularization of monasteries and their libraries. Many of these books included prints pasted to their pages. These prints were acquired by the BnF, which today possesses some 240 examples. The formation of the Louvre's Rothschild Collection began with the 1872 auction in Leipzig of prints owned by Theodor Weigel and depended primarily on the discoveries of resourceful art dealers. Again, most of these rare prints entered the marketplace only after being removed from medieval books. Among the key scholars who inventoried and studied these works were Henri Bouchot (1849-1906) and André Blum (1881-1963), although their efforts were overshadowed by German and British specialists, who correctly criticized their French counterparts for tenuous arguments concerning the French origins of specific prints and printmaking in general.

Lepape's second essay serves as an introduction to current scholarship and methodology. As she demonstrates, the desire to date and localize early prints is often defeated by their potentially endless multiplication and the copying of motifs. Nonetheless, Lepape organizes her discussion according to chronological and stylistic groupings. But she also focuses on fascinating examples of how printmakers streamlined the production process. Shortcuts included changing an inscription's dialect according to the target audience; reusing a decorative frame for different subjects; or employing the same carved figure to depict various saints by inserting a different head, attribute, or name. In addition, Lepape touches on the use of prints in manuscripts and the important devotional and iconographic role of hand-applied colors. Although the book's chronological parameters exclude most fifteenth-century engravings, the essay includes a brief discussion of work by the Master E.S. and the Master of the Berlin Passion.

In two additional chapters, Lepape focuses on well-known objects that provide insights into the technical side of print production. The first is the "Bois Protat", a fragment of a walnut printing block carved on one side with the Crucifixion and the other with the Annunciation. While there is agreement on the block's French origin and its c. 1370-80 date, there remains some uncertainty about whether it was used to print textiles or paper. Lepape attempts to refine the localization and dating through comparative analysis of clothing and style, relying on panel painting, manuscript illumination, tapestries, and sculpture. The second object is a copper plate of the Annunciation used to produce a metalcut (gravure en criblé, Schrotblatt), a relief printing technique that originated in Cologne. There are no known fifteenth-century prints that match this plate, but Lepape dismisses the suggestion that the plate is a fake by analyzing its many punches or stamps, all of which are found in authentic examples.

Kathryn Rudy's two substantial essays focus on the various functions of fifteenth-century prints, beginning with one of the most important contexts for print use: the manuscript. Indeed, the hybrid form of handwritten books with printed images was an understandable result of prints replacing expensive and labor-intensive illuminations. In some cases, the single-sheet print was simply inserted in a book as a page, its blank reverse then covered in text like any other page. Thus today, some prints - long removed from books - still carry the clues of their former contexts on their reverses. On the back of a woodcut of the Crucifixion, a text reveals that it was once inserted in a Missal at the beginning of the Mass, serving as more than an appropriate illustration but also the essential focus for the celebrant's kiss. The text found on a metalcut of the Veronica Veil is in the voice of a nun who begins a prayer by addressing Christ with the feminine "sister Jesus". The reverse of a metalcut of Christ Carrying the Cross includes the complete text of a prayer, suggesting that it may have served as an independent devotional aide like a modern prayer card. The back of a woodcut of Saint Christopher and the Christ Child is painted with a circular diagram of the celestial spheres and a list of the planets, clarifying the holy infant's identity as creator of the universe. Rudy explores the full range of print-manuscript combinations, including many printed images carefully trimmed with scissors and pasted into books and integrated into hand-painted designs. Her most dramatic example is the Hours of Charles d'Angoulême, which includes several engravings by Israhel van Meckenem that were completely overpainted by the illuminator Robinet Testard.

Rudy's second essay moves beyond the book context to acknowledge prints that served other functions: engravings of animals designed as visual models for illuminators; a woodcut of the Ten Commandments, the five senses, and the seven deadly sins used as a catechistic aide for confession and instruction; a diagrammatic woodcut that guided the user through the canonical hours of prayer; an engraving of the Adoration of the Magi with an inscribed text that reveals the image's apotropaic power; a woodcut of Saint Sebastian meant to ward off the plague; a metalcut of Pope Gregory accompanied by a prayer that rewards an indulgence; engravings of the Einsiedeln Madonna by Master E. S. commissioned specifically to promote a miraculous pilgrimage site; and a ghastly woodcut of the martyrdom of Simon of Trent that helped fund a popular anti-Semitic cult.

Over the last fifteen years, the study of early printmaking has been substantially updated and methodologically refreshed. [1] This volume joins an ever-growing body of scholarship determined to move the field forward by replacing the old obsessions of authorship and production with new questions about reception and function. It should be essential reading for graduate seminars on fifteenth-century print culture. In addition to the many fascinating insights offered by Lepape and Rudy, the eighty-eight color reproductions are an equally valuable scholarly contribution, especially since these prints are rarely displayed and mostly unknown. Like the exhibition that inspired it, this book will undoubtedly motivate a new generation of scholars interested in late medieval devotion, as well as the complex dynamics of Europe's first century of mass visual culture.