Frederik J. Vervaet: The High Command in the Roman Republic 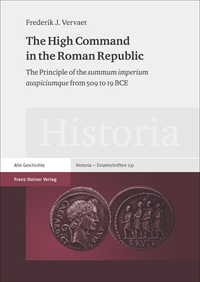 This volume examines the question of whose imperium prevailed when two magistrates held the same grade of imperium. While a dictator's imperium clearly outranked a consul's, and a consul's a praetor's, Vervaet argues that consular imperium was always consular imperium whether wielded by a consul or a proconsul. Hence the question: whose imperium auspiciumque was summus if, e.g., a consul and a proconsul or two consuls conducted military operations together?

The first three chapters establish several key points: imperium and auspicia were distinct entities, the former the prerequisite for the latter; ductus imperium auspiciumque meant that a magistrate had personally led his forces into battle while imperium auspiciumque alone implied overall command but not necessarily personal leadership - as with Augustus. When two consuls or other magistrates of equal rank operated jointly in Rome or in the same province alternating the fasces each month or day determined who was in charge although mutual agreement based on one consul's superior dignity, seniority, or iteration could supersede this arrangement. Finally imperium militiae had to be exercised in a province and whoever held that province had the summus imperium in it.

The remaining chapters constitute the meat of the book. The fourth takes up the vexed question of the summum imperium auspiciumque and the right to triumph. While Vervaet rejects Mommsen's view that only the holder of the summum imperium auspiciumque could triumph, he discerns certain basic principles that guided the senate's decisions in awarding triumphs. Central to his argument is the case in 241 in which a consul held overall command in the war against Carthage but a praetor actually commanded the fleet that won the victory that ended the First Punic War. Unlike other scholars, Vervaet accepts the account in Val. Max. 2.8.2 of the dispute between these two magistrates over who got to triumph and sees in it a reflection of the principle that while the consul's imperium auspiciumque was summus and therefore entitled him to triumph for the victory, the praetor's imperium auspiciumque, although subordinate, was still legitimate and independent. And because he had personally led (ductus) the fleet into battle the praetor had every right to triumph, too, although not on an equal footing with the consul. V calls the senate's decision here "a gallant compromise." (98) The principle that legitimate and independent imperium auspiciumque along with actual leadership of an army entitled a magistrate to claim a triumph thus makes sense of the senate's award of a triumph to Nero in 201 and Purpurio in 200 but not to Scipio in 206 or Lentulus in 200, because they were not magistrates when they won their victories. This latter principle was only abandoned with Pompey's triumph in 81. Vervaet's argument here constitutes a response to those, like Beard, who claim that we cannot really discern any rules in these cases and that the senators were essentially making it up as they went along.

The fifth chapter examines the position of consuls in provinces. Vervaet takes the position that consular imperium was not maius quam the imperium of a proconsul in the same province: consular imperium was always consular imperium, as argued in Chapter 1. Rather the office of consul itself placed its holder above someone serving as proconsul, who no longer occupied the consulate. Hence a consul held the summum imperium auspiciumque. However once again social or political factors could trump this hierarchy when consuls found themselves confronting proconsuls superior to them by virtue of family, personal prestige, or auctoritas. This V sees clearly revealed in the disastrous failure of the nobilis proconsul Caepio to subordinate himself to the novus homo consul Mallius in 105. Vervaet also accepts that the testimony of Cicero (Att. 8.15.3 and Phil. 4.9) indicates that - at least in theory - a consul's imperium auspiciumque entitled him to interfere in any province but adds the important caveat that the leges de maestate and de repetundis effectively prevented consuls from employing that theoretical power in any province except that assigned to them save in cases of dire necessity.

Vervaet's sixth chapter takes up cases when two magistrates occupied the same province. Vervaet again points to a series of rules: magistrates of equal rank took turns exercising supreme command but a magistrate outranked a promagistrate and while a consul naturally was superior to a praetor, the latter retained an independent imperium auspiciumque, as argued in Chapter 4. Once again however social factors could subvert these relationships: higher senatorial rank, greater age, or superior birth. Vervaet sees the latter of these factors as determining the positions of Scipio and Silanus in Spain in 211-206: the patrician nobilis Scipio was unquestionably in charge. Yet Silanus was by far the elder and had been praetor, so any general rule determining how these factors interacted in specific cases remains unclear. Minucius Rufus did not initially feel he had to take orders from the older, patrician ex-consul Fabius Maximus when the former was elevated to co-dictator in 217.

The final chapter traces the process by which the summum imperium auspiciumque came to be monopolized by Augustus, beginning with Pompey's supervision of the grain supply in 57 through Caesar's dictatorship, the triumvirs, and finally to Octavian, who after 27 enjoyed the power to intervene in any and all provinces, even those nominally under the control of the senate and its proconsular governors. An appendix takes up the knotty problem of the lex curiata de imperio and argues that the lex did not confer imperium, which a consul already had by virtue of his election, or auspicia, which he also already possessed because he possessed imperium. Rather Vervaet adopts the position that the lex confirmed that plebeian consuls possessed the auspicia patricorum maxima that made their imperium iustum. This Vervaet suggests was the result of a compromise following the Sextio-Licinian law of 367 that opened the consulate to plebeians.

There is much to commend in this study. Vervaet's scholarship is formidable. There is nary a scholar who has opined on a point that Vervaet touches on whose views Vervaet does not discuss, often in footnotes that can occupy 50 to 95 percent of the page. His argumentation is careful and rigorous throughout, and his command of the sources is masterful. However it is on this last point that a reviewer must have doubts. Vervaet in general accepts what the sources tell us about Roman staatsrecht uncritically. So e.g. his suggestion that the lex curiata represented a compromise regarding the auspices once plebeians began to hold the consulate assumes without discussion that Livy's account preserves accurate information regarding constitutional developments more than three centuries earlier. Much more skeptical scholars would consider almost any evidence about developments at Rome during the early Republic highly unreliable. And finally because Vervaet admits that various extraneous factors could alter the application of the rules he discerns, one is left with the impression that the rules in reality were, as Captain Barbarosa of Pirates of the Caribbean announced, "more what you'd call 'guidelines' than actual rules".