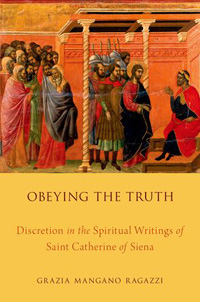 An examination of the place of Catherine of Siena (d. 1380) in the theological discourse of the Catholic church is not the foremost approach scholars take in Catherinian studies. Rather, analyses of her asceticism, sanctity, cult and influential position as a holy woman during times of papal crisis have been the predominate themes of many articles and books of this Sienese saint. Dr Grazia Mangano Ragazzi's monograph, however, attempts to assess the core of Catherine of Siena's doctrinal teachings and how it is relevant in the twenty-first century. The author identifies this core as "discretion" which, for Catherine, is defined as meaning "knowledge and love of the truth (which is God) that leads concretely to the virtuous action." (179) Ragazzi takes the reader along a clear path that has many signposts to establish this point.

The first marker along the route addresses the fraught issue of Catherine of Siena's literacy. Ragazzi considers all of the works (Letters, Dialogue and Prayers) attributed to the Sienese saint and argues cogently that the corpus is authentic. Her decision that the works are genuine is owing to the linguistic consistencies found throughout the various medieval manuscripts as well as several eyewitness accounts testifying to Catherine of Siena's composition of these works. Ragazzi highlights that the discrepancy regarding Catherine's authorship has a great deal to do with the nature of the composition of the works: they were dictated by Catherine in the vernacular and taken down by secretaries rather than written with her own hand. Whilst this form of composition differs from twenty-first century concepts of authorship, it is shown that dictation was a common form of "writing" in the Middle Ages and did not diminish the creative input of Catherine as theologian and author.

Ragazzi next turns to the meaning of discretion in Catherine's works, especially chapters 9-11 in the Dialogue, Letter 213 and Prayers 15, 17 and 18. The use of the term "discretion", depending on which genre in which it appears, ranges from knowledge of God and self resulting in virtuous action (Dialogue), to acts of justice informed by charity (Letters), and a harmonious spiritual and moral life owing to unity in the individual's memory, will and intellect (Prayers). The triad of memory, will and intellect harkens back to Augustine of Hippo's division of the mind; and it is precisely this question of what sources influenced the thought of Catherine that takes up the next section of the book.

The concept of discretion employed by the Latin churchmen Augustine (d. 430), John Cassian (d. 435), Benedict of Nursia (d. 480), Gregory the Great (d. 604), Bernard of Clairvaux (d. 1153), Richard of St Victor (d. 1173) and Thomas Aquinas (d. 1274) is considered. Ragazzi observes that Catherine's presentation of discretion resonates with similar points of view found in the abovementioned theological thinkers. These points of similarity include such themes as: moderation; knowledge of God and self; interiority; and prudence. But the author concludes that attempts to find direct lines of influence are not possible, especially as Catherine did not read Latin. What is more likely the case is that such ideas were mediated through the liturgy, sermons and vernacular forms of theology.

On this last point of vernacular theology, Ragazzi investigates if contemporary popular teachers who sometimes communicated in the vernacular may have had a direct impact on Catherine. Here the works of Domenico Cavalca (d. 1342), Bridget of Sweden (d. 1373) and Raymond of Capua (d. 1399) are included for examination. It is observed that for these figures, as it was for Catherine, the terms "discretion" and "prudence" were synonymous. While the works of these near contemporary and contemporary authors provide a context for Catherine's thought, one wishes that Ragazzi provided an assessment of the sermon literature that was circulating in fourteenth-century Tuscany as this may have enabled a fuller establishment of the tone and nature of the theological discourses to which the saint was exposed.

It should be stressed that Ragazzi's attempt to establish some correlations between the various fourteenth-century thinkers as well as the earlier monastic and scholastic theologians does not lead her to draw simplistic conclusions that Catherine's exposure to any one individual directly shaped her understanding of discretion. Rather, the exercise of outlining the ideas of these various thinkers is to establish a well-defined picture of Catherine of Siena as a theologian within the existing trends of her world. Effectively, Ragazzi demonstrates that Catherine was a product of her age and the streams of ideas and formations related to discretion cannot be neatly traced back to any one source or school of thought.

The crux of the study, however, does not end simply with an historical contextualization of Catherine's theological thinking. Ragazzi pushes the analysis to the present day with the aim of assessing what the Sienese saint has to offer contemporaries. Here Ragazzi argues that Catherine's theology is one based on a conjunction between mysticism and morality. For Catherine, discretion was a convergence of the love of God, self and neighbor. This convergence is formulated by a combination of faith and reason that enables individuals to act morally. Thus, Catherine's doctrine points ultimately to the fulfillment and pursuit of virtuous action that can be pursued in the here and now. Although these observations of Catherine's thought on discretion are insightful, Ragazzi sometimes presents these teachings as if they were systematic and coherent in their original form. It should be remembered that Catherine wrote in a narrative and imaginative style that often went against the grain of scholastic order.

The book makes constructive contributions to our knowledge of this Sienese saint. Ragazzi's treatment of Catherine of Siena's literacy is one of the most straightforward and informative presentation of a contested topic to appear in recent years. While this and other assessments in the book provide important historical insights, the book ultimately is aimed not at historians and medievalists but at contemporary theologians. Ragazzi's assessment of Catherine's theology is an insightful guide of how to understand the contours and significance of the Sienese saint's doctrines in our twenty-first century world.