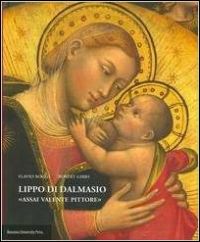 Lippo di Dalmasio (ca. 1353-1410), celebrated by the Bolognese seventeenth-century art critics Francesco Cavazzoni and Carlo Cesare Malvasia as one of the most accomplished Emilian painters of the fourteenth century, and as an inspiration for such important baroque innovators as Guido Reni, is not very well known today. Since the nineteenth and twentieth centuries, art historians have characterized his oeuvre as "underserving of high consideration" (Crowe and Cavalcaselle), "very monotonous" (Raimond van Marle), "modest" (Miklos Boskovits), "unresolved" (Andrea Bacchi), "conservative" (Daniele Benati) or "subordinated to Jacopo di Paolo" (Roberto Longhi), as Flavio Boggi and Robert Gibbs tell us in their introduction.

With their deep and immense knowledge of trecento Italian painting, and inspired by the baroque critics, Boggi and Gibbs place the art of Lippo di Dalmasio back in its real art-historical position. The basis of this important and exciting study is art criticism and history, the very essence of the history of art. The appendix offers 128 documents on the life of the artist, 48 of them hitherto unpublished and all of them in original text with a summary in English. In so doing, they present a secure base for reconstructing the life of Lippo, revealing the hidden records to every reader, documents which give us detailed information about the artist who was the son of a painter (Dalmasio) and the nephew of another very important artist (Simone dei Crocefissi). Lippo lived and was married in the Tuscan town of Pistoia in his early career, and Boggi and Gibbs reconstruct a wider oeuvre through stylistic analysis, referring to Lippo's connections with Tuscan (Pistoiese) and Emilian (Bolognese) artistic practices. Through careful study of both Pistoiese and Bolognese paintings of disputed authorship, they present a group of works that can be convincingly attributed to the young artist on the basis of either Bolognese or Pistoiese stylistic features. Boggi and Gibbs study the pigments, design, iconography, goldwork, frames, and style of the many works that are plausibly attributed to Lippo. Beside the well-known and signed works, the authors succeed in gathering an overwhelmingly rich corpus of work for the artist. Important paintings of disputed authorship are now re-assigned to Lippo, such as the splendid Madonna of Humility (cat. 1) in San Domenico, Pistoia, a fresco that is stylistically between his father's and uncle's work, and one that has been attributed to Giovanni Cristiani, Antonio Vite, and Paolo Serafini.

The main problem in reconstructing the oeuvre of Lippo is that most of his works were reduced in format and venerated as miracle-making images, especially in the Counter-Reformation and after. In the process, their original inscriptions and dates have been lost or destroyed. Today we know of only nine signed works, including three that carry the dates 1394, 1397, and 1409. The catalogue presents 42 works in total, including many new attributions and some unpublished paintings, the most in high quality figures, every painting - regrettably only in black and white - within the catalogue entry. Additionally Boggi and Gibbs give an appendix with lost works attributed to Lippo di Dalmasio by the "pre-ottocento" art critics, the most of them lost frescoes but also paintings on wood or canvas.

A fresh image of Lippo's career and oeuvre is presented: the book is not only the first monograph of this important Bolognese painter but is also a welcome and detailed study of Bolognese and Pistoian painting of the fourteenth century.