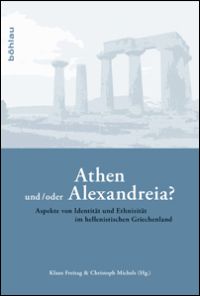 The aim of this volume is set out in the introductory chapter (7-18) by Freitag, Fündling, and Michels. Whereas, they say, recent research on the Hellenistic period has paid much attention to cultural exchanges between Greeks and other cultural groups, and also to the impact of Greek culture on the Romans, they seek in this volume to consider the relatively neglected question of how Greeks in the traditional area of Greek settlement adapted their views of their identity and ethnicity to the political and cultural currents of the Hellenistic world. They recognise that it is not easy to define that traditional area, but suggest an area including the western Greeks, mainland Greece, and the Greeks in and around the Aegean and the Black Sea. They point out that recent research has led to a much more positive view of the vitality of Hellenistic poleis in these areas.

Seven chapters then follow. Six are drawn from a conference held in Aachen in 2011. Three contributions to the conference, published elsewhere, do not appear here. The book's final chapter by Fündling, however, is an addition, not given at the conference. These chapters generally respect the geographical framework outlined in Chapter 1, though the western Greeks are represented only by Günther's chapter on the two Syracusan women in Alexandria portrayed in Theocritus' 15th Idyll. The generally accepted chronological span of the Hellenistic period - roughly Alexander to Cleopatra - is also respected, save for Fündling's chapter which extends far into the Roman imperial period, including, for instance, a fairly long discussion (250-262) on Hadrian's Panhellenion.

These limits, geographical and chronological, cover a very wide range of material, too wide to treat in detail in a volume of this kind. The editors therefore aim for selective coverage - as they say (13), "schlaglichtartig" - organised around four main themes: interchange between literature and contemporary forms of construction of identity; identity at polis level; identity projected in external politics; and identity beyond the city-state. This approach, while perfectly reasonable, has its problems. The available evidence is very unevenly spread over the Greek world, varies over time, and is often very limited. The possible scope of research suffers accordingly. While the individual contributors are scrupulous in presenting and analysing the evidence available for their various topics, there is no overall survey of the existing evidence and the constraints that it imposes on research. For instance, the surviving literature tells us little about much of mainland Greece in the later second and early first centuries. To some extent increasing information from archaeology and, especially, epigraphy, can compensate, but such information is conditioned by the geographical areas in which research has been undertaken. Also, there is no epilogue to gather together and evaluate the various contributions. The introductory chapter does review them all, but more synthesis would have been welcome.

The chapter by the Tausends concerns Pheneos in northern Arkadia, a small polis with limited resources but situated at the crossing of two important routes and therefore strategically significant. In 2011 a programme of multidisciplinary research on Pheneos began, including excavation of the major fortification wall. Already the results allow dating of the wall to roughly the period of Alexander the Great. However the Tausends argue that Pheneos itself could not have paid for such fortification. After reviewing the political history of the time, they conclude that the wall was probably built by the Macedonian regent Antipater because of the revolt in 331 against Macedonian domination by Peloponnesian states led by Sparta. This chapter shows how archaeology can bring new evidence, but also illustrates the difficulties facing a small polis in often turbulent times.

The problems of small Greek states are again brought out in Michels' chapter on the destruction and reconstruction of Greek cities. Likewise in Engster's contribution on the internal and external politics of the Achaian League cities are shown defending their interests as best they could.

Engels' chapter is a preliminary to his planned edition of the more than 100 fragments of the periegete Polemon of Ilion, writing in the second century and important in the development of an antiquarian approach. Titles of roughly 30 works by Polemon survive. Many of these were on regions or cities in "old Greece", extending from the Black Sea to Italy, Sicily, and even Carthage. Polemon exemplifies the strong Hellenistic interest in local material, but also how much of that material is now lost. The introductory chapter also points to the almost total loss of the many local histories produced in the period (10).

The most original chapter is by Daubner on Epeiros. He is concerned with the extraordinarily numerous ethnics and sub-ethnics found on inscriptions from the area. He argues for a pyramid of groupings, from the Epirotes made up of Molossians, Chaonians, and Thesprotians down to groups of between 200 and 500 persons. These groups, identified by sub-ethnics, were, he suggests, comparable to modern groups in northern Greece formed under a strong leader for transhumant pastoralism. The groups, he argues, would not be strictly territorial and could change, both in their own membership and in the associations they chose to form with others. He finds these basic units of Epirote society surviving in the recently published inscriptions from Butrint, from the period of Roman domination. While allowing for change in Epirote society, particularly among the wealthy who had access to foreign models, he argues against the view that the Epirotes were making a fairly unsuccessful attempt to adapt to a Greek model of polis and federal state. Instead, he suggests, they preserved over centuries a local social pattern. On Epeiros we now also have E. A. Meyer, The inscriptions of Dodona and the new history of Molossia, (Steiner, Stuttgart, 2013): this work would not have been available to Daubner.

The book closes with the very long chapter (201-294, including ten pages of bibliography) by Fündling on Greek communities under Roman domination. He takes a particular interest in the Roman province of Achaia, and the extent to which it became Greece par excellence. The chapter is a sophisticated analysis of the tensions and contradictions within Greek identities in contact with Rome in a period extending forward at least to Hadrian. As its long bibliography suggests, the chapter confronts the very considerable body of work in recent years on the topics that it covers.

In sum, this book is collection of diverse papers within a major theme. The papers differ not only in their topics but also in the types of evidence that they use and consequently in their methods. Individually they are work of quality, even if they interconnect only to a limited extent. How Greeks of "old Greece" saw themselves in the Hellenistic period is a question that deserves more attention, and the reader will find in this book varied but interesting and informative attempts to tackle it.