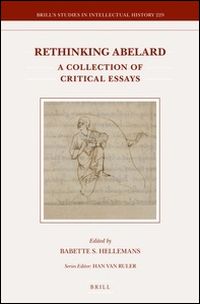 In this collection of essays on different aspects of Abelard, the most valuable contributions are those by Lesley-Ann Dyer, Eileen Sweeney, Ineke Van't Spijker and Constant Mews. Dyer's piece is a well-documented, careful and often observant discussion of two sets of Platonic triads Abelard uses in his Theologia Summi Boni: Father, Son and Holy Spirit equated with the One, Nous and the World Soul, and God, Form and Matter. She adds comparisons with how William of Conches, Thierry of Chartres and a commentary attributed to Bernard of Chartres use these triads.

Sweeney's article is a useful, synthetic discussion of Abelard and the Jews, a subject on which there has been a good deal of recent work of which she takes full account. Although she has no very special thesis or interpretation, she presents a finely nuanced account of the Jew in Collationes and makes the contrast between Abelard's presentation of this figure and his treatment of Jews in his Commentary on Romans more thoroughly and carefully than has previously been done.

Van't Spijker makes a comparison between Abelard and a contemporary who, though very different in his intellectual character and interests, thought carefully about many of the same issues: Hugh of St Victor. She argues that there is an important correspondence between 'inner' and 'outer' in Hugh, but not in Abelard. The careful documentation will make this study valuable for anyone interested in comparing these two writers.

Mews is one of the world's leading Abelard specialists, and his vast range of knowledge about the area ensures that his writings are always worth reading: here he throws light on the relationship betweem Abelard and especially Walter of Mortagne, Hugh of St Victor and the Summa Sententiarum.

The other well-known Abelard scholar who contributes to this collection is Michael Clanchy. He asks whether Abelard ever wrote a book of Sententiae - something Abelard denied doing. Clanchy argues that Abelard was indeed able to deny with honesty that he had ever written such a work, although his was the teaching behind it. Clanchy's case is convincing, and elegantly made, but other historians (such as Mews and David Luscombe) have already indicated the same conclusion.

The other items have possibly serious drawbacks. Juanita Fero Ruys begins well, by pointing out an interesting passage in his Carmen ad Astralabium, where Abelard entertains the idea that death would be a welcome release from a miserable life, if there were no punishments afterwards. But she adds the strange idea that Abelard himself had suicidal wishes, and backs it up unconvincingly by reference to his Historia calamitatum. Then she turns to the planctus on Jephtha's daughter, who bravely accepts death in order that her father's vow can be fulfilled, but in no sense is a suicide, and finally, she considers a genuine suicide - Samson, as described in the planctus about him. But Samson's heroic suicide has little to do with the supposedly suicidal wishes the author attributes to Abelard, without any evidence (and without discussing Abelard's explicit treatment of suicide in Book II of the Theologia Christiana).

There is at least more of a train of argument here than in Wim Verbaal's literary critical essay on 'Abelard's Multi-Layered Image-Building', whilst the wide-ranging and speculative contribution by the editor herself, Babette Hellmanns, on 'Abelard and the Poetics of ingenium', will not be to all tastes.

Altogether, then, this book contains a good deal of useful material, though it lacks any special coherence except for its relation to Abelard, and none of it is of the first importance. There is, however, an additional claim which the collection makes, in its title. It promises to be a rethinking of Abelard. In her Introduction, Hellmanns justifies the title. She discusses what she considers to be the weaknesses of existing scholarship on Abelard, accusing it of using 'anachronistic mental categories' and of lacking 'a full acknowledgement of multidimensionality ... in Abelard's oeuvre.' She also claims that Abelardian scholarship suffers from 'the ongoing debate concerning 'Abelard and Heloise', with its concomitant parti pris of authorship, historical truths, criteria for scholarship ....' Since she does not cite any other discussions, it is hard to see what in detail constitutes her complaints, or how the approach in this heterogeneous group of chapters responds to them and succeeds in 'rethinking' the subject. The comment about Abelard and Heloise is particularly puzzling, since over the last twenty years a consensus has grown up about the genuineness of the correspondence. As for Abelard's multidimensionality, the Proceedings of the various conferences on Abelard, since the 1970s, all bring together work by social and cultural historians, historians of philosophy, theology and religious life, literary scholars and philologists. The range of Hellmanns's collection is most remarkable, indeed, for what it does not include: hardly anything on Abelard as a philosopher, and nothing at all on him as a logician - although he devoted half his career almost exclusively to logic, and it was as a logician that he became famous. There is nothing wrong with this omission - every collection does not have to cover every area of its subject's work - but it is hardly a mark of respect for 'multidimensionality'.