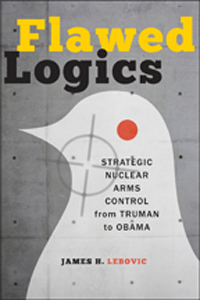 The latest work of Lebovic offers a valuable overview of arms control since its inception. Lebovic did not 'plow' the archives but utilized open sources. He assumes 'that public pronouncements [...] provide evidence of the thinking behind arms control' (XII). Lebovic thus will surely not agree with the New York Times editorial of 26 November 1978 which highlights that 'observing the politics of SALT these days is like spending a night in the opera. Emotions are rising all around but it is virtually impossible to follow the story.' [1]

Thus the question arises whether public pronouncements do enable real insights into arms control and defense affairs or are limited to a description of societal emotions, scares and hopes? Lebovic's assumption that public debates will reveal the working of arms control might be overly optimistic. In his work crude calculations of capabilities and strategies of survival are replaced by collective or selective threat perceptions. Lebovic argues that 'domestic politics and prevailing belief systems' do structure the arms control agenda to no lesser extent than 'the international threat environment' (X). According to Lebovic arms control is a two level game. Flawed Logics is constructed accordingly: the volume offers both a brief but informative account of the history of strategic arms control negotiations and a more elaborate analysis of the accompanying arms control debates from Truman to Obama. Lebovic's analysis clearly prioritizes the domestic game. The author seeks to reconstruct from public debates the ideal-type belief systems of hawks and doves. In brief, hawks do mistrust Soviet intentions, fear Soviet cheating, demand superiority and bargaining leverage. Hawks tend to advocate an abandonment of arms control in favor of pure action-reaction mechanism. Doves prioritize the advantages of co-operation and institutionalized processes. They tend to seek parity and equal security and cherish sufficiency instead of superiority. Doves are defensive, absolute gain seekers who focus on a mere stabilization of the status quo.

Lebovic's categorization into hawks and doves poses definitional problems (X). Arms control is bipartisan. An equation of hawks and doves with party positions is thus problematic or false. Lebovic's focus on fixed but flexible belief systems that do structure the behavior of members of the respective groups is not entirely convincing. The reviewer would argue that hawks turn to doves, doves to hawks depending on the distribution of capabilities. It has to be added that capabilities and intentions are twins. Intentions change with capabilities. Capabilities enable any given actor to order the environment, to manage global and regional affairs by way of arms control or by other means. Those who advocate an enhancement of capabilities are deemed hawks. Hawkish credentials are normally a pre-requisite for success in arms control. The author highlights that only a hawk like Ronald Reagan could embrace a global zero concept (242f). The same hawkish credentials allowed Richard Nixon to embrace strategic arms control and to conclude the SALT I process successfully. Jimmy Carter lacked hawkish credentials thus was vulnerable. As a consequence Carter was less able to be compromising in the SALT negotiations. President Carter's firm approach to SALT was necessary to disarm the phalanx of Jackson Democrats and Reagan Republicans who had started to oppose the Nixon-Kissinger détente policy and thus the SALT process. Some argue that Carter was weak since he supported reductions. Reductions, however, were supported by Liberals and Conservatives, such as Senator Edward Kennedy and Paul Warnke, but also by Paul Nitze and the US Joint Chiefs of Staff (JCS). Advocacy of reductions is not a sign of weakness. Reductions assured US superiority. Reductions enhance the relative importance of qualitative factors. The superiority of US equipment assured the US a qualitative margin. Thus capabilities always deserve attention. Furthermore, hawks turn to doves in times of superiority. The superior party has a standing and negotiating currency. Acquired bargaining chips allow the elimination of strengths of adversaries in a bargaining process. The interrelationship with material factors and timing is thus of central importance in arms control negotiations. The reviewer admires the scholarship provided by Lebovic but considers the classification in doves and hawks as excessively difficult and unfortunately only partially fruitful. [2] Finally, hawkish or dovish positions do not necessary rest on collective belief systems.

Allow me to discuss the importance of perceptions and trust in arms control. These terms remain undefined here - as in the volume under review. The author of this review would claim that executives can rationally judge capabilities. The aim of arms control is even to assure rational decision-making on the basis of clear sets of information and data. Verification options, information and data exchanges, telemetry data, satellite surveillance and the prohibition of concealment allow an 'objectified' capability analysis. Thus a Secretary of Defense - such as Harold Brown - is able to rightfully defend SALT II as a stabilizing treaty. As Secretary of Defense he knows the weapons systems, the quality of the weapon systems, all quantitative and qualitative factors relevant for a judgment of the balance. He also knows the intentions of the adversary and the compliance record. From an arms control or crisis stability perspective the MoD's judgment can qualify as almost a 'scientific' statement. Statements by the JCS to an even larger extent do qualify as 'scientific' or reliable. The JCS are politically untainted. The JCS are the unquestioned experts on matters of survival. JCS statements in Congressional Hearings normally decide the destiny of an arms control treaty. The verdict of the JCS either confirms or destroys the 'scientific' data sets and evaluations provided by the executive as invalid, unbalanced or politically unwanted. Hierarchies of expertise do structure behavior. Thus the category perception is secondary; so is the role of the believe system.

The role of trust in arms control is also relative. Inter-state relations are about a common interest in survival. Strategic arms control aims at the preservation of mutually assured destruction (MAD) - irrespective of the number of weapons. The core aim of classic arms control is crisis stability. Crisis stability requires the management of capabilities in order to forestall that destabilizing asymmetries are arising which might create 'windows of opportunities' or 'windows of vulnerabilities' and thus invite pre-emptive strikes. Thus trust is not necessary. Necessary is a rational management of an action-reaction mechanism to assure under all circumstances a second strike capability and thus MAD. Secretary Brown clearly stated in the SALT II Hearings: 'I would not recommend this treaty, if it required us to trust the Soviets.' [3] Verifiability was needed not trust. Reagan's concept of 'trust but verify' finally eliminates the question of trust discussed in the conclusion of the reviewed volume. The reviewer thus disputes the validity of the claim that the US downgraded the Soviet threat when the 'leadership of Russia - not its capabilities - substantially changed' (246). Lebovic argues in his concluding remarks that a changed 'perception of malevolent intent' or ideational factors were altering the superpower relationship in the era Gorbachev. The reviewer would reverse the argument. Soviet capabilities were by and large on par with the US in numbers of delivery systems but not in quality of the equipment - a quality that is measureable. The reviewer would further argue that the Soviet Union's power base crumbled. Gorbachev's new approach just considered the 'correlation of forces' - economic, political, social as well as geographic factors. The material basis of the Soviet Union had changed for worse. The Soviet power base had to be revived. The aims of the Soviet Union remained by and large unaltered. Neither Brezhnev nor Gorbachev was belligerent but sought to preserve the autonomy of the SU and the communist experiment. The revolution of the 1980s was not ideational. Changing were the material forces and thus the fungible power of the SU. The aims were merely adjusted to the level of capabilities. Realism's materialism thus might better explain the real game changing factor: a shift in capabilities that triggered an adjustment process. Not trust in Gorbachev changed the game but trust in Western capabilities.

To sum up: Flawed Logics offers an excellent overview of arms control from the Baruch Plan to New START. The volume generates interesting scholarly insights. However, the two level game is not always entirely captured. This 'gap' is due to the time span of the work, the resource base, but also due to the approach of the author. The diplomatic historians - in possession of the diplomatic record - will be the final judges. Flawed Logics nevertheless deserves to be read.

[2] 'Incidentally, I am anxious to eschew expressions like 'hawks' and such like in this matter since it seems to me that the SALT skeptics are asking increasingly difficult and sophisticated questions which are well founded and which will need an equally serious answer.' John Killick (UK Perm Rep NATO) to Sir Antony Duff, 26 Feb 1979, TN, FCO 46/2087.