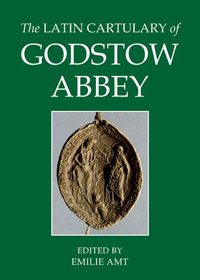 Godstow Abbey, north of Oxford, was home to a community of Benedictine nuns between the early twelfth century and November 1539 when the house was surrendered to Thomas Cromwell. Quite when it was established is one of several issues re-examined by Emilie Amt, who argues for a date earlier than previous commentators, and places its origins between 1110 and 1120, although the community would not be fully established for a further two decades. The foundress of the house and its first abbess was Ediva of Winchester, the English widow of an Anglo-Norman knight, William of Launceleve. Their two daughters served as the first two prioresses of Godstow, under their abbess mother, while their brother probably became a monk at Evesham, and eventually abbot of Abingdon.

For this edition Emilie Amt has examined an earlier cartulary, compiled by 1404, in Latin, from which the Middle English version was abstracted - albeit without witness lists, which are given here in full. She has also analysed the original French text of a foundation narrative, which is contained in the Latin cartulary.

The editorial techniques of Emilie Amt supply the reader with a more rounded interpretation than previously available. In The English Register, the editor had rearranged the original order of appearance of material. Most notably, in the belief that they had originally been overlooked by the compiler, he redistributed some fifty-two charters from a miscellaneous section, at the end, into the main body of the cartulary. In The Latin Cartulary Emilie Amt restores the original order, while providing a running concordance with the English Register. In addition, she has extended the analytical context in three ways: firstly, by providing details of forty-four documents which were later insertions in the cartulary (although more than half of them pre-date 1404); secondly by detailing fifty-one documents which do not appear there at all (forty-nine of which pre-date 1404). Thirdly, there is a schedule of sixty-three documents (fifty-two pre-1404) which do appear in the English Register, but not in the Latin cartulary.

The editor of the English Register considered that the Latin cartulary had been written by a professional scribe. Emilie Amt does not disagree with this observation, but amplifies it considerably. She presents plausible evidence to suggest that the author could have been the incumbent prioress, Alice of Eaton, in which case this would distinguish her as the only female scribe of a cartulary identified to date.

Another thought-provoking conclusion is drawn from analysis of the French-text foundation narrative. While its location at the beginning of the cartulary is appropriate to its function in describing the specific origin of the house, Emilie Amt points out the passage appears to have been extracted or reduced from a larger work, and she suggests this could have been in the tradition of Anglo-Norman hagiographical works, in this case on the foundress.

A further revelation comes from an analysis of the miscellaneous charters at the end of the cartulary, which suggests that, at least in the twelfth and thirteenth centuries, financial support was provided by the families of some nuns when they entered the house, even though this could have attracted accusations of simony. Whereas the editor of the English Register had believed the miscellaneous section to be an aberration tagged on to the end of the cartulary, Emilie Amt points out that it may have served as a conveniently discreet location for these potentially damaging charters.

Although Godstow was not a large landowner, Emilie Amt demonstrates that their acquisition of lands did not result from passive acceptance of benefactions, but more often from pursuit of desirable opportunities. They secured these by a variety of proactive measures, such as paying a fee or perhaps a corrody to the benefactor, or else by exchanging parcels of land with other landholders to consolidate their holdings.

Overall, this new edition highlights several previously unnoticed aspects of the cartulary. Most notably, if the suggestion that the compiler was Prioress Alice is taken in conjunction with the foundation narrative being a fragment of a larger hagiographical work, then the evidence for an active writing tradition at a female house begins to take tentative shape, and may stimulate interest in examining, or re-examining, evidence from other houses. It also permits a fuller appreciation of the English Register, whose editor acknowledged in 1911 that "nothing short of the issue of the Latin text in its entirety will definitively clear up the frequent mistakes, the numerous obscurities, and the strange inconsistencies of the English rendering" (Early English Text Society, vol. 142, xciv). He would be well satisfied with this critical edition from Emilie Amt.