Krisztina Fehérváry: Politics in Color and Concrete. Socialist Materialities and the Middle Class in Hungary, Bloomington, IN: Indiana University Press 2013 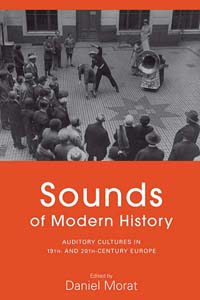 This volume is the outcome of a stimulating conference on 'Hearing modern cultures' held in Berlin in 2010. It represents a significant contribution to the ongoing process of defining the comparatively young field of 'Sound History'. As the editor notes in his introduction, the field is still characterized by a multitude of different perspectives, and a corresponding range of approaches such that even a stable set of terminologies have yet to be settled upon. The guiding spirit of the volume is correspondingly pluralist. What links the articles is the broad shared assumption that hearing and listening are historically and culturally inflected acts and experiences and thus compelling objects of scholarly inquiry; as far as what that inquiry might reveal, the essays pose collectively the question of whether exploring sound history might lead to the rewriting of existing narratives of modern history or simply a sensory texturing of existing ones.

A first core theme concerns the emergence of new technologies and their capacity to transform how historical actors perceived sound. John Picker revisits the role of the stethoscope as symptom and symbol of a new culture of close listening amongst the nineteenth-century bourgeoisie; Anthony Enns examines the impact of new technologies on ways of thinking about human listening; Stefan Gauss discusses how the advent of the phonograph did for the relationship between sound and time what the telephone did for the relationship between sound and space. Christine Ehardt, meanwhile, explores the multiple purposes to which the early telephone was experimentally put, noting the sense of novelty, fascination and magic - not just the celebration of technical improvement - as having been central; finally, Alexandra Hui explores how expert musical listeners debated the presence of distracting noise in various contexts in the late nineteenth century and how discussion of such phenomena resonated with anxieties about allegedly declining capacity to listen 'properly'.

There follow two very contrasting essays on bourgeois practices of listening in the theatre and concert hall. Sven Oliver Mueller traces, somewhat schematically, the transitions from an (aristocratic) culture of noisiness in the theatre and concert hall to a (bourgeois) culture of silence, building his arguments on the back of a comparison of London and Berlin and a consideration of the transnational flow of behavioral codes from the latter to the former. It captures a very general truth of sorts, but its equation of class, behavior and aesthetic disposition is sometimes a little reductionist, and the overarching explanation - the transition to bourgeois society - creates an unmistakable air of teleology in the argument. This is underlined by Hansjakob Ziemer's excellent essay on symphonic listening in the First World War, which shows that specific contexts - spatial, cultural, political, temporal - mattered greatly in shaping meanings audiences attributed to musical sound. In his account, individual listeners figure less as compliant followers of a behavioral script handed to them by 'bourgeois culture' than as a diverse range of people actively participating in the process of giving meaning to concert-going and musical listening as social practices. The war figured as a moment of intense cultural nationalization, of course, and many listeners could make sense of musical life and activity within that framework; conversely, others could resist such moves or simply consume musical offerings in entirely different ways.

Two more essays on the First World War make this a particularly strong focus of the collection. Daniel Morat gives a subtle account of acoustic dimensions of 'August 1914' experience, reminding that, although the 'spirit of 1914' was not universal, the enthusiasm for war was still very real for those who did feel it. As he shows, the wave of patriotic singing and cheering that occurred in July and August 1914 was not simply a reflection of nationalist emotion but served to constitute it - singing and cheering were not external effects of pre-existing sentiment but actively called that affect forth. Axel Volmar, meanwhile, shows how the changing technology of warfare reduced the capacities of sight to produce meaningful intelligence and led to increased reliance on listening, both with and without technical help. The distance of artillery made it no longer possible to see where it was coming from, and it was too dangerous to put one's head over the parapet to have a look anyway. For this reason military technology developed ways of locating the origins of attack by its sonic traces; less scientifically, but at least as important, learning to recognise the sounds of different types of incoming shell became a precondition for taking appropriate cover in time; stethoscopic listening modelled on medical practice likewise served to detect the presence of advancing tunellers from the other side.

A final set of essays focus on the interwar years. Carolyn Birdsall's excellent essay examines the various ways in which sound was imagined creatively in the Weimar era. While arguing for a long archaeology of the modern acoustic imagination she locates a specific moment in its exploration in various Weimar cultural documents produced by various cultural actors; the wider, highly sympathetic, argument carried by the piece is a plea to maintain dialogue between different 'genre' studies - such as radio studies, film studies, media studies or literary and musical (soundtrack) studies - rather than allow the hardening off of such distinctions as the field of sound studies matures institutionally. James Mansell, meanwhile, explores the medicalised discourses underpinning noise abatement debates in interwar France, drawing out links between a culture of bourgeois pessimism regarding the impact of noise on men's health and a set of rhetorics anchored in fin-de-siècle debates surrounding neurasthenia - a diagnosis that had fallen from favor within medical circles but that continued to enjoy cultural power: as with Birdsall, the argument is for an archaeology of auditory culture that crosses the First World War. Anneliese Jacobs closes the volume with some general reflections on how to read the sounds and silences of Amsterdam during the Second World War.

This book does an excellent job of show-casing the variety of possibilities and potentials present in the field, and is to be thoroughly recommended on those grounds alone. If it is scarcely comprehensive, this can hardly be grounds for critique in itself - after all, a volume like this never can be. There is, however, some patterning to the absences, which reflects the very classic definitions of 'the modern' that underpin the collection. Modernity is understood as urban, industrial, technological, and busy - indeed, it was all those things. Yet it bears pointing out that most spaces, even in high modernity, were not urban, but rural, even if, of course, modernity and its noises 'intruded' in the form of agricultural mechanisation too. As far as the urban focus of the collection is concerned, the soundscape - or at least the responses to it - that the volume focuses on is very much a bourgeois one, too: it was not until the 1970s - in Great Britain at least - that many working class people got their hands on their own telephones, for example. Likewise, the unspoken assumptions about the secular qualities of modernity are such that the sound effects of organised religion do not figure. This points to the wide open nature of a field in which much remains entirely unresearched.

As far as the novelty of the field is concerned it bears pointing out, finally, that this is, as ever, a rhetorical figure beloved of the field's proponents as much as it is a matter of simple fact - as Mark Smith's opening essay gently reminds, the field has been around for a little longer than some would like to imagine. Much as one can endorse Carolyn Birdsall's call for continued intellectual openness and creativity as the field continues to constitute itself and its agendas, it may also be time to open up some more explicit polarities in the debate. It is a necessary part of the process of defining a field that its early protagonists support each others' exploratory moves, but, as the earlier dynamics of emergence of fields such as gender history showed, there comes a point where some hitherto submerged disagreements need clearer articulation. As this excellent collection demonstrates, after all, there is much of substance in the field that is worth arguing over.