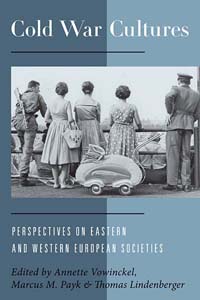 The concept of Cold War Culture has received a lot of attention across the humanities, and the existing research literature fills library shelves. However, in the majority of cases, it focuses specifically on the United States. Framed in its narrow sense, studies on American Cold War Culture often deal with the Red Scare of the 1940s and 1950s. The volume edited by Annette Vowinckel, Marcus M. Payk and Thomas Lindenberger shifts the attention to Europe and asks if the concept of Cold War Culture provides new insights into European history during the Cold War. "Culture" is defined very broadly as a "set of techniques, images, habits, mentalities, ways of producing and consuming, forms of communications, self-descriptions, and patterns of daily life." (5-6) Equally, "Europe" is not restricted geographically to Central Europe but the volume rather aims at bringing Western and Eastern European perspectives together. One of the fundamental questions is posed at the very outset: "does it make sense to speak of a genuine European Cold War Culture?" (2) In a way, the editors answer this question already in the introduction with the caveat that "European culture is in principle plural and multifaceted" and that the history of post-war Europe cannot be understood within the framework of the Cold War only. To account for the many European perspectives from East and West, they suggest the plural term Cold War Cultures as opposed to a singular American Cold War Culture - hence the title of the book.

The volume assembles sixteen articles divided into four sub-sections. Part one deals with the role of the media (radio, film, television, and literature), parts two and three analyse constructions of the "self" and interactions with the "other", while part four concludes with the legacies of the Cold War. The case studies present some of the classic topics of Cold War Culture research: the film industry, radio music programmes, spy fiction, sport competitions, religion, visual art, consumer culture and advertising, civil defence narratives, international youth festivals, protest movements as well as public memory and musealization. Rather than examining them all briefly, I would like to discuss a few key themes.

First of all, only half of the articles are concerned with discussing a specific European variety of Cold War Culture. All in all, the articles come to a balanced, if not sceptical conclusion: yes, there are features of a unique European Cold War Culture but they are limited. Often, European is nothing but a cypher for "not American". Cases in point are Marie Cronquist's article on Swedish civil defence narratives, which stressed the value of community rather than family, or Monique Scheer's examination of how the Catholic Church tried to construct a Western European identity through the cult of Mary. Other case studies highlight the influence of transatlantic networks. For example, Stefan Schwarzkopf explains how American marketing research made its way into the British advertising industries of the 1950s and shaped the freedom-versus-totalitarianism discourse. The chapters not overly concerned with answering the guiding question gain some independence by focusing more on the culture of the Cold War in Europe.

Secondly, several authors raise the question whether the European post-war history can be explained by only focusing on the Cold War narrative. Instead they stress the importance of a longue durée analysis. Sabina Mihelj argues that the notion of Europe as a culturally divided continent is in fact an old one which can be traced back to the Enlightenment (280). In her contribution on the production of films in Eastern Europe, Marsha Siefert shows that the origin of a Cold War Culture lies in the 1920s when the Soviet Union established regional film studios in the Soviet republics of Ukraine, Armenia, Georgia and Azerbaijan. It seems that, especially in the case of Eastern Europe, 1945 was less of a turning point than for the United States, and Cold War Culture was just a new chapter within longer developments.

A third observation relates to the way in which we write Cold War history, and how Cold War Culture guides our understanding. Quinn Slobodian's case study on the 1960s World Youth Festivals reminds us that scholars have often taken the binary opposition between Capitalism and Communism for granted while ignoring other encounters, e.g. with the Third World (268-69). Marsha Siefert deliberately does not go along with the common notion of Cold War Culture as an American concept and explains why scholars from post-socialist countries perceive Cold War Culture as an "uneasy transplant" subordinating everything to the realm of politics while ignoring regional perspectives (43-44). Andrew H. Beattie argues that during Germany's post-reunification discussion about the history and legacy of the SED dictatorship, the Cold War Culture of the 1950s enjoyed a revival as a battle slogan (305). The conclusion one might draw from these observations is that Cold War Culture itself needs to be understood and analysed as a contemporary attribution of the Cold War.

A few shortcomings should be noted. Coverage of the 1980s is essentially lacking. With the exception of Edward Larkey's article on radio reforms in East and West Berlin, the vast majority of papers deal with earlier decades. In fairness to the editors, it should be noted that historians have only recently begun to turn their attention to the 1980s. However, this gap becomes all the more obvious since the volume concludes with three chapters on the post-1990 legacies of the Cold War. Another key question only mentioned in passing is the impact of Cold War Culture on the history of the European integration and a common European identity.

"Cold War Cultures" is a collection of consistently transnational studies of the meaning of culture in Cold War history and historiography, rather than an argument for or against the concept of a distinctive European Cold War Culture. It provides a panorama of case studies written by an international team of scholars. The book is diligently edited and illustrated with many examples. From among the many books on Cold War Culture, this one is certainly one to keep handy.