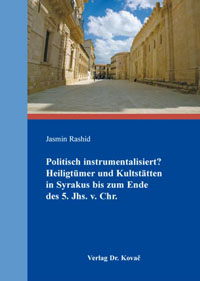 Ancient Greek Syracuse has been the subject of numerous books and specialist studies since the nineteenth century. In the period between 2006 and 2010 alone, more than thirty studies dealing with themes touched upon in this book have been published. [1] Despite the vast array of existing studies, however, Jasmin Rashid's book, which represents a slightly revised version of a doctoral dissertation submitted in Wintersemester 2010/11 at the University of Hamburg (11), is unique for two reasons. First, most studies are strongly disciplinary in their orientation. By comparison, the author adopts a multi- and interdisciplinary approach that combines written and archaeological sources (including coins) into a single approach (29-30). Second, and more crucially, as the author rightly observes, for antiquity the connection between religion and politics is usually restricted to discussing Egyptian pharaohs and Roman emperors, with a similar connection for the Greek world largely left unexamined (17-18). This in itself is a subject regarding the development of modern scholarship that deserves further elaboration in future research. In the meantime, we have this case study which presents us with a unique opportunity to explore and assess this important cultural nexus for Greek Syracuse from its foundation in the last third of the eighth century to the end of fifth century BC.

The book consists of ten chapters, including the introduction (17-30) and conclusions (205-11) on either side of them. Chapter 1 introduces the argument just discussed and emphasizes how religion served both functional and identity-building purposes. On the heels of this point, it is no surprise that Jasmin Rashid discusses the work of François de Polignac and in particular adopts his classification of sanctuaries into urban, non-urban, suburban, and extra-urban ones (22-23). Chapter 2 contains a very detailed discussion of the surviving source material available for study (31-42). She notes the very fragmentary written evidence and thus the corresponding importance of archaeological evidence (39). Chapter 3 is divided into two parts. The first is devoted to the tradition of Delphi's role in Syracuse's foundation and accordingly plays an important part in Jasmin Rashid's overall argument (43-52). She accepts this tradition as completely historical, arguing that it provided the founders with divine legitimization and wondering whether Delphi was acting in a politically motivated way to ensure the loyalty of the Corinthian settlers and later Syracusans (51). The second part rapidly treats the cultural transference from Corinth to Syracuse, foregrounding this by citing the well-known passage at the start of the sixth book of Homer's Odyssey (53-58).

Chapter 4 moves us from Greece to Sicily and collects the evidence for the genesis of the Syracusan polis (59-86). Here the author discusses the history of research and the available information on Syracuse's town plan and city quarters, in which she discusses any possible Corinthian inspiration. Chapter 5 summarizes thoroughly all the known sanctuaries and places of worship, underlining how Syracuse's first sanctuary was devoted to Apollo in his capacity as Archegetes (87-121). Chapter 6 does the same for Syracuse's three "sub-colonies" of Akrai, Kasmenai, and Kamarina (123-34). Chapter 7 brings in Syracusan politics by reviewing all the known details (135-78), highlighting the few that bear out the relationship with religion (170-78). Chapter 8 places each of the divinities attested at Syracuse under the microscope so as to understand their profiles in relation to Syracuse's political and cultural development (179-97). She reminds us how little is still known of the early cultic activities of Athena and Zeus Olympios and how well the cult of Zeus Eleutherios illustrates the connection between religion and politics. Chapter 9 extends this discussion of divinities into numismatics, where possible, noting that the Gamoroi's demise brought to an end the close connection with Delphi and Olympia (199-204). Chapter 10, the conclusions, rounds up the results in both German and Italian (205-11). Jasmin Rashid reminds us of the indissoluble link between religion and politics from Syracuse's beginnings. She observes that the paucity of seventh-century building activity is owed to the Syracusan oligarchy being more interested in expanding its territory than on building religious monuments, and that Gelon similarly invested little in religious monuments. She calls, moreover, for more work on the relationship between religion and politics, which has generally been overlooked.

These chapters raise three issues concerning the strengths and weaknesses of their contents that apply across the board and so can be grouped together for discussion.

First, the same laudable approach and goals adopted in this book also present their own challenges, as they demand that a single individual acquire a large and steadily developing methodological and theoretical tool-kit. While this is not an impossible task, it presents challenges. The literary sources, for example, are usually taken at face value, the prime instance being the story that the founders consulted the Delphic Oracle prior to Syracuse's foundation. We find no citation of, say, Catherine Morgan's book Athletes and Oracles (1990) on Archaic Delphi and the reliability of early oracles. The absence of relevant bibliography is an entirely separate matter discussed further in a moment. Archaeological sources are often similarly treated, in pretty much the way she has inherited them. More, for instance, could have been said about Agathokles' attempt to advance himself politically while overseeing the building of a temple to Athena by using the stone from this project to build himself a sumptuous home. A date could be suggested for this incident otherwise known only from Diodorus Siculus by situating Agathokles into a wider pattern of building at Syracuse and at other Sicilian Greek cities. In other words, an independent analytical approach to the archaeology is generally absent, although the author later calls for such work in her conclusions (211). With such a patchy written record, this matter takes on greater significance in establishing a connection between religion and politics.

Second, practically no space is given to native Sicilians. Two brief mentions are made. The first is in connection with the discovery of the huts excavated on Ortygia, where she repeats the factoid that these huts were destroyed (83) and goes on to say that the Syracusan settlers followed the city model of their homeland (84). On the second occasion, she admits the possibility of continuity with native cults when discussing divinities connected with nature (196-97). This brevity raises two concerns. Was the spatio-cultural model of Corinth fully developed for export, thus denying innovation on the part of the settlers in encountering new environments and opportunities? Does the general silence regarding possible native Sicilian contributions imply tabula rasa thinking? These are core issues that cannot be left unaddressed in the current postcolonial climate and in consideration of the Italian tradition of interdisciplinary scholarship that views native-Greek interaction as mutually reciprocal, especially in the sphere of religion.

This leads to my third and final point. As already noted, some crucial bibliography is missing. One thinks in particular of the work of Gianfranco Adornato and Francesca Veronese published over the last decade. [2] Gianfranco Adornato, for instance, adopts a robust critical approach to previous reconstructions and arrives at conclusions that seriously upset the orthodoxy so frequently repeated, as here, that they have become well-trodden and uncontested. His work would have been welcome in discussing the Deinomenids (119, 156), instead of citing Edward Freeman's 1891 general history of Sicily for the dating of the temple of Athena on Ortygia.

These criticisms aside, Jasmin Rashid has produced a very solid synthesis of currently available sources. While the bibliography and handling of the sources may not be to everyone's liking, the originality of the connection between Greek politics and religion cannot be denied. This is a connection that needs to be investigated further in future research and one which will be the ultimate lasting legacy of this book.

[2] For convenient summaries of all this bibliography, see De Angelis, note 1 above.