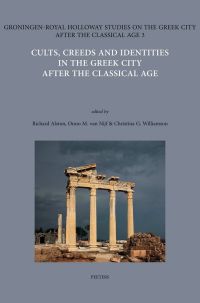 After Feeding the Ancient city (2008) and Political culture in the Greek city after the Classical age (2011), the volume under review is the third output from a series of workshops held between 2003 and 2006 as part of an international research project on the post-classical Greek city. The book starts with a 16-page introduction signed by the three editors. Thirteen chapters follow, in rough chronological order, without geographical or thematic subdivisions. The coverage stretches from the Hellenistic period down to Late Antique Judaism and Christianity. The common themes of religious cults, religious creeds and an emphasis on identities, are explicitly meant to create the unity of the volume.

The introduction is a short history of the history of the Greek polis. It supplies a florilège of examples and test-cases, which exemplify the authors' basic thesis: the approach to the history of the Greek polis, based on value judgements and on the concept of decline, misses the mark: "the post-classical polis lost little of its political and cultural significance in a world dominated by Hellenistic kings and Roman emperors [...]. The post-classical period retained vibrant and complex political cultures, the institution of the polis spread over a far greater region than in the Classical period and the economic complexity and the abilities and strategies of the poleis to manage and to provide for their resident communities were, if anything, enhanced". The editors develop interesting insights on the theme of continuity in the relationship between patron deities and civic communities, not only in the old civic and urban centres but also in the case of the new cities who adopted tutelary gods. Generally, they seek to demonstrate that polis-religion as a model is useful to understand how people used religion in order to construct their identity and experience.

One underlying problem might lie with the framework. No matter how morally and politically correct the volume's starting point might seem, in avoiding value judgment based on the notion of decline, one might worry that, at times, it comes across as too functionalistic, for instance in the central matter of religion. When the authors claim that (4) "as one function of the religion was to order the experience of life in the city; it is important to discuss how modern scholarship has envisaged the relationships between Greek religion and the polis and to investigate whether this link seems to have weakened to any considerable degree after the Classical age", this statement, with its emphasis on the function of the religion within the polis, conveys the impression that in proving the vitality of the link between religion and the polis, a contemporary ideological goal is served. However, such a functional definition of religion might hardly have made sense in the ears of ancient audiences. We might wonder why indeed it matters so much to explore the loaded question of the link between religion and the polis, its permanence and "strength".

The volume contains chapters of methodological interest and others, which gather and analyse a wealth of evidence. A. Chaniotis, focuses on processions and their modalities within Hellenistic poleis. He seizes the opportunity to reply to critics and he concludes that the Hellenistic processions demonstrate "an increased sensitivity to size, staging, aesthetics, social hierarchy, and political commemoration". Evangelia Anagnostou-Laoutides examines the ruler-cults of the Hellenistic period as part of a long Near-Eastern tradition of ruler cults. Rachel Mairs focuses on the "temple with intended niches" at Ai Khanoum and uses archaeology to explore wider questions on the ethnic and civic identity of Ai Khanoum inhabitants. Christina Williamson explores the rituals of civic oaths as a way of creating communal action in various contexts of the Hellenistic polis. She concludes with an imaginative description of an oath-taking ritual, between the construction of individual and collective sense of identity, always keeping a civic character. Civic identity is also examined by Aude Busine via the rituals of oracular activity. She examines oracle seekers as pilgrims and priests as representatives of cities. She considers the period known as "Second Sophistic" as a turning point. Günther Schörner examines officials as dedicators in the post-classical poleis. He inspects objects of dedications and also deities and tries to detect the impact of the Roman presence in the Greek poleis. Maria Pretzler looks into the notions of past and present in the Periegesis of Greece of Pausanias and concludes that what Pausanias describes is in fact civic religion, which, admittedly, was far from being conservative during Roman times. Susan Sorek and David Noy study the presence of Jews in the Greek cities of Roman Syria and Palestine (Dura Europos, Apamea, Beth Shean). They detect a less prominent degree of integration of the Jewish communities into the wider context of these cities; the situation in Asia Minor (Aphrodisias and Sardeis) appears different. George H. van Kooten considers rhetorical competition in the context of the Christian community at Corinth. He studies the example of Paul versus the "sophists" of the Second Sophistic insisting on the similarities but also on the differences. The participation of Christians in the civic life is at the centre of the interest of Despina Iosif; the ways of life that the Christians adopted were not at odds with life in the cities of the Roman and Late Antique world, the exception being priests, monks and ascetics. Jan Willem Drijvers focuses on Jerusalem in the 4th century AD as an interface of important changes. The transformation gave Jerusalem a remarquable dynamism, visible in the cosmopolitan character that the city acquired. Michael Murlyan provides a comparison between Rome and Constantinople examining various topographical sites and monuments. The author perceives strategies in the use of space, which reveal a certain dialogue, if not the polemic between old and new landmarks and monuments. Charlie March perceives an "open" character in the city of Gerasa where to see and to be seen was extremely important.

In this form, this collection of published papers wants coherence, as shown by the lack of cross-referencing, which would reflect (or create) a common project. Also, unlike the two previous volumes issued from the same project, here an epilogue is lacking. On the other hand, one major positive point of the entire entreprise is the broad range of geographical, thematic, chronological contexts: Asia Minor, Near East, Afghanistan, "old Greece", Palestine, Constantinople, Rome and also, processions, ruler cults, religious architecture, civic oaths, oracles, dedications of officials, local identities in Pausanias, the Jewish presence in the Greek cities. The collection illustrates vividly actual research on the polis. The broad geographical and chronological range will facilitate the study of the polis as part of a continuum, which includes late antique and byzantine periods, mainland Greece, Asia Minor and the Middle East. Within this wide range of contexts, the reader should be encouraged to actively search for her own (new?) problematique with which to approach the poleis of the post-classical era. In sum, the historiography of the post-Classical polis has to lead to thinking about the politics involved in the study of this particular theme.