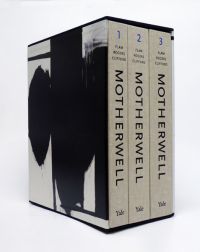 Robert Motherwell was one of the central founding members of the Abstract Expressionist movement in the United States during the 1940s and 1950s and maintained an inventive, prolific career until his death in 1991. The artist experimented with a variety of abstract modes and media, but is most renowned for his expressively executed collages and celebrated series of paintings the "Elegies to the Spanish Republic". Despite Motherwell's important stature within the history of contemporary American art, there have been few major studies and retrospective exhibitions devoted to his entire artistic oeuvre. As a result, the publishing of this catalogue raisonné is a significant scholarly endeavor that provides an opportunity to assess the full scope of his production of paintings and collages. A volume dedicated to Motherwell's drawings is forthcoming and a complete corpus of the artist's prints has previously been published. [1]

This catalogue is comprised of three substantial volumes with the first devoted to a textual overview of the artist's career. It contains critical essays analyzing the chronological development of his works by medium. There is also an extensive chronology, a list of exhibitions, a complete bibliography of writings by and about the artist and an index of titles. The essays offer a concise but informed overview of the stylistic and iconographic evolution of Motherwell's oeuvre. Although works are separated by medium in the catalogue, one of the strengths of the essays is analyzing important formal and thematic relations between the artist's diverse output of paintings, collages and prints. The detailed annotated chronology serves as a valuable historical addendum to the essays and highlights key events in the artist's life and career. Particular emphasis is given to Motherwell's educational background, his intellectual and political interests, as well as his significant activities as a writer and lecturer. The second volume has entries for 1,209 paintings on canvas and board and the third documents 889 collages and 722 paintings on paper. Each entry is accompanied by an illustration of the work and contains comprehensive information essential for a catalogue raisonné, most importantly description of materials, definite title and date, present owner, provenance, exhibitions and key bibliographic references. Most of the entries also include comments that focus on factual issues pertaining to works, such as explanation of revisions, crucial statements made by the artist, as well as major literary and socio-historical allusions.

The research and writing of the catalogue was sponsored by the Dedalus Foundation, which maintains an extensive archival collection of Motherwell's art library, professional papers, correspondence and studio records. It should be noted the authors relied heavily on these materials in compiling the catalogue and cited them liberally throughout each volume, providing valuable information on archival sources available for researching the artist. This publication is unprecedented as a scholarly resource on Motherwell, offering complete visual and factual knowledge of his paintings and collages, which includes missing works and all known pieces in private collections. Even though Motherwell claimed his oeuvre officially began in 1941 with his first mature work, the catalog does contain entries on seventeen earlier pieces, offering a rarely seen view of Motherwell's artistic juvenilia. The reproductions are consistently of a high quality, virtually all are in color and illustrations of most major works are printed on a full page.

Although the catalogue raisonné is often seen as a tool of traditional connoisseurial art history or the art market, there has been a resurgence of interest in the serious scholarly mission of such publications and their relevance to contemporary trends in art historical discourse. There has also been debate on the type of information that is suitable for a catalogue raisonné, as some scholars insist on an objective compilation of facts and others argue the merits of a monographic interpretive approach. The authors of this catalogue have adopted a compromise of sorts, restricting discussion to facts about the artist's oeuvre, but using a somewhat expansive biographical framework that allows for consideration of artistic and intellectual influences, as well as contextual issues relevant to Motherwell's personal and social life. This methodology also involves applying a psychobiographical perspective to certain works, which can perhaps be supported by the artist's strong interest in Freudian and Jungian theory (29-31).

One of the catalogue's major revelations is Motherwell's penchant for artistic revision throughout his career, which he often practiced in a subtle and almost obsessive manner. These revisions were in keeping with the dialectical formal method employed by the artist, in which he frequently alternated between controlled and more spontaneous, automatic procedures. In addition to continuously rethinking the stylistic and iconographic elements of his works, Motherwell would frequently change their titles. This new information on Motherwell's extensive and inventive revisions is enlightening, as critics regularly accused the artist of being formulaic, particularly due to his extended engagement with artistic series like the Elegies and the Opens. However, correctly identifying these works and documenting their alterations was one of the primary challenges in compiling the catalogue, a process that was aided by consulting archival photographs and studio records. It also created a conundrum for the authors of where an edited piece should be placed chronologically within the artist's oeuvre. The method devised for dating such a work is based on whether it is more aligned stylistically with its period of genesis or revision. While this curatorial rationale is clearly explained in the entries, it is inevitably subjective, allowing for differences in scholarly opinion that will undoubtedly problematize future Motherwell studies. The authors posited various explanations for Motherwell's fixation on artistic revision which range from experimentation with formal and symbolic variations to more psychobiographical interpretations. One intriguing idea is that forms of creative editing may have served as a psychological device, providing a means for Motherwell to assume an aesthetic detachment from the troubling emotional content of his art. Assembling this massive chronological record of Motherwell's many artistic repetitions and revisions should aid in a more precise understanding of the aesthetic and signifying meaning of his imagery.

The catalogue reveals other new insights on Motherwell's art, many of which resulted from the authors' meticulous study of the foundation's archives. For instance, despite Motherwell's dedication to modernist abstraction, the catalogue emphasizes his predilections as a "representational artist" with regard to both images and titles. Such archival sources as personal photographs, travel scrapbooks, journal entries and other memorabilia supply material for identifying the referential biographical grounding of much of his abstract imagery. This insight supports Motherwell's own frequent assertions that his abstract forms were directly rooted in perceptual experience of the physical world and quotidian reality (115).This attitude was influenced by his early philosophical training in Pragmatism and separates Motherwell from the purist aesthetic and transcendental outlook of other Abstract Expressionists like Mark Rothko and Barnett Newman. However, other key archival sources correct inaccuracies in Motherwell scholarship, some of which were instigated by the artist. An example is the discovery of preparatory studies for the Open paintings, in which he sketched specific calculations for the images' proportions, contradicting his claims that the lyrical formal structure of the Opens were based on chance, intuitive procedures (127).

As a scholarly resource, the catalogue is notable for its rich compilation of formal and biographical information. Yet, this also represents an overall limitation of Motherwell studies, which lacks the broader methodological treatment associated with other major Abstract Expressionists. Although the authors have done the service of assembling a definitive bibliography on the artist, it would have been extremely beneficial in the introduction and essays to define the state of Motherwell studies and summarize key findings and problems within the literature. In addition, the brief contextual and interpretive content of the essays would have been strengthened with more extensive citing of major scholarship, particularly recent publications that have presented theoretical and social analysis of his art. The authors would have also been within their bounds to indicate how the archival content of the catalogue will assist scholarship on Motherwell and even suggest avenues of inquiry for future research. This catalogue will no doubt further enhance Motherwell's artistic stature and provides a firm scholarly base that will hopefully stimulate and inform more ambitious research on the artist.