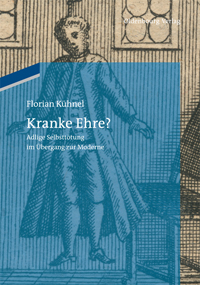 As a vibrant field, the history of suicide continues to expand. This recent contribution represents the published results of a dissertation submitted to the Philosophical Faculty of the Wilhelms-Universität Münster in 2012. Kühnel's monograph, however, is a hybrid, which attempts to integrate Adelsforschung for the Sattelzeit into the existing historiographical literature on self-killing during the early modern period. Theoretically, therefore, he focuses on the changing social role of the nobility through a cultural analysis of the practice of noble self-killing. Practice is juxtaposed with normative values in order to demonstrate that literary and moral arguments employed to justify the honor of suicide in fact had less bearing on the presumed intent, though they did act as a mitigating factor upon the actual treatment of self-killers by the authorities or perceptions of self-killing in society at large.

The resultant explication of six micro case-histories (with ancillary references to numerous others) illustrates how noble suicide fell between the dishonorable treatment usually meted out to commoners and ostensibly heroic justifications for the deed. In other words, noble self-killers were neither honored nor dishonored. What Kühnel instead conclusively illustrates is, on the one hand, a continuing cultural condemnation of such desperate acts and intentions on the part of perpetrators generally lacking in any aspects perceived of as honorable and, on the other hand, an almost atavistic social deference to members of the nobility which continued to mollify punishments for their self-murders out of respect for their status - even as the society of orders began to dissolve. Kühnel judiciously adopts a methodological examination of ego-documents/Selbstzeugnisse by choosing particular cases with suicide letters as a means of ascribing intent or, at the very least, the self-fashioning of the event.

His first case consequently illuminates the paradoxical nature of the honorable burial of Count Karl Heinrich von Hoym, who dishonorably committed suicide while under arrest in 1736. It took hours for the authorities to find anyone prepared to cut down his dangling corpse, a noticeable signifier of the dishonor popularly associated with physical contact with the corpses of self-murders throughout the early modern period. Subsequently, his body became the subject of an investigation. Relatives testified that the Count had been melancholic and, therefore, non-compos mentis at the time of his suicide. When Prince-Elector Friedrich August II sought a confiscation of property, this could only be achieved through a conviction for treason on the basis of suicide under arrest as an attempt to escape justice and, therefore, evidence of criminal guilt. Despite his conviction (which proved Hoym sane and hence a felo de se), however, the family still succeeded in acquiring electoral dispensation for a 'silent' burial on the basis of Hoym's noble status. Kühnel thereby establishes the co-existence of conflicting norms at various social levels contributing to a murky undercurrent of cultural ambiguity. Here, one might suggest that though not entirely dishonorable, a silent burial was nonetheless neither entirely honorable either. The second case of Freiherr von Arenswald, though apparently clearer, is complicated methodologically by a multiplication of 'authentic' suicide notes - initially two originals, followed by four copies and finally appearing in print, the existence of multiple suicide notes creates an interesting hermeneutic problem. Contextually, Arenswald explicitly referred to indebtedness as the reason which led him to kill himself. The later printed versions of his note were edited to the point of turning him into something of a local hero. Others interpreted his act as a verification of a general social malaise (kranke Ehre) inherent in the noble code of honor. Arenswald himself passively compared his self-killing to a murder perpetrated upon him by others, rather than as an heroic act. The issue of burial practices recurs throughout the text, most notably in chapter four, which considers the interment of the bureaucrat Alexander von der Schulenburg. Schulenburg ended his life, because he felt that he had failed in his duties. Complete self-identification with the absolutist state (or 'bureaucratic patriotism'), Kühnel concludes, could thus lead a nobleman to kill himself. However, Schulenburg did not expect to retrieve his personal honor through suicide.

Chapter three is noteworthy for treating the most prominent figure in the book, Friedrich II of Prussia. Ironically, Count von Hoym reappears as the individual who betrayed Friedrich's planned flight to England with Katte. Ironically, however, it was Hoym who died by his own hand. Although Friedrich extolled the virtues of suicide to redeem his honor in case of capture at the hands of the enemy (as noted by Voltaire and other contemporaries), Kühnel demonstrates that he in fact probably never harbored any actual suicidal tendencies. Friedrich simply extolled a noble Roman idea of a 'good death' in order to enhance his reputation, employing the legends of Cato and Otho as a means of self-fashioning. Chapters five and six deal with changing attitudes toward suicide in terms of the law and medicine. The suicide of the Augsburg patrician, Johann Jakob von Welser, represents a good example of the sociological phenomenon known as indirect suicide, whereby a murder is committed in order to receive the death penalty and yet provide the accused with an opportunity to repent and achieve salvation. Kühnel notes that, in fact, it does not appear that Welser sought forgiveness, merely a death he proved unable to confer upon himself. His status permitted him an honorable execution by the sword. When a member of the Illuminati, Franz Sales von Spreti, shot himself in neighboring Bavaria, the manner of his burial (and the confiscation of his property) became a matter of contention between medical practitioners and the Aulic Council in Munich, who sought to condemn the secret and potentially seditious order by branding it a suicide cult. Finally, chapter seven reconsiders the famous case of Heinrich von Kleist and suicide as part of the Anpassungskrise faced by nobles during the era of Romantic nationalism.

Overall, Kühnel offers us a trenchant micro-historic reinterpretation of the changing roles and perceptions of noble honor during the eighteenth and nineteenth centuries. Whether viewed as a pathological cause of suicide - a noble disease - or as a mitigating factor in the determination of sanity, burial practices or confiscation, he makes clear that the honorable notion of suicide as a 'good death' played no role in actual self-killings themselves, the Todessehnsucht of Friedrich II notwithstanding. Certainly, many of Kühnel's interpretations must be speculations, because we can never identify the actual motives of self-killers beyond the grave. This having been said, the same remains true for the discernment of mentalities of virtually all past figures, a fact which seldom deters historians; in the end, all history remains a matter of interpretation. Kühnel's interpretations are sensitive to the historical record and generally conservative, rather than far-fetched. On the whole, his book makes a significant contribution to research on the history both of the nobility and of suicide.