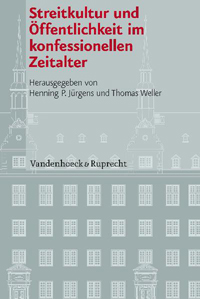 Streitkultur und Öffentlichkeit im konfessionellen Zeitalter is a collection of thirteen articles first presented in 2010 at a conference sponsored by the Leibniz-Institut für Europäische Geschichte in Mainz. Although the topic originates from one of the Institute's current research foci, the intra-Protestant doctrinal controversies of the Confessional Age, the articles represent a broader investigation of the "culture of conflict" and changing parameters of "the public sphere" during the period. By "culture of conflict" the editors mean two things: conflict (oral, written, or physical) as a means of cultural production by which to solidify and even create interpretations of the world; and a society's cultivation of venues in which conflict can take place according to rules that help to minimize its inherent risk (11).

Until recently, examinations of these phenomena so foundational to modern western society have focused on the eighteenth century. Taking an interdisciplinary approach that includes dialogue between theologians, historians, and history-related disciplines, these articles address the Confessional Age, examining the following questions: What did this period's different forms of public debate have in common? To what degree did they influence notions of the public sphere? How was conflict perceived and understood by contemporaries? Did the public controversies of this period exhibit clear differences from conflict in the early Reformation and Enlightenment? Can we detect a specific culture of conflict in the Confessional Age?

The editors have divided the articles into three categories that provide the structure of the book: themes over which extensive public conflict arose; forums in which conflict was carried out, (whether this meant transforming those already-established or creating new ones); and the broad range of media forms and their role in the creation of this culture of conflict.

Absent from the volume, and this is its most significant weakness, is any effort to draw together the results of the individual articles to create a larger picture. Moreover, many of the authors fail to address specifically how their examinations help to deepen our understanding of the culture of conflict and the public sphere. In light of this lacuna, what follows is an initial attempt to sketch some of the key aspects of these phenomena as presented in the various articles.

First, themes around which this culture of conflict emerged ranged from the more overtly religious (such as Protestant critiques of the Jesuits as described by Silvia Serena Tschopp and Kilja Lichy), or even strictly doctrinal (such as the intra-Protestant struggles in the post-Interim period, as dissected by Irene Dingel), to the more broadly political (i.e. whether Spain or France should take precedent in celebratory processions and rituals, or the precise status of the humanity of the natives in the New World as discussed in articles by Thomas Weller and Mariano Delgado respectively). But in almost all cases, disputes that might rightfully be described as promoting a culture of conflict addressed aspects of religion and politics together, neither entirely free from the other.

Second, the new or expanded forums and media in which to carry out conflict during this period most starkly differentiate it from its medieval predecessors. Marcus Sandl makes the key point that when new communicative forms were invented, control was lost because cultural norms governing their use had not yet been established (256-257). This insight implicitly informs the entire volume.

For example, multiple articles address the period's transformation and expansion of the role of the university disputation, a forum of conflict popular during the Middle Ages. After a brief interlude in which it was rejected by humanists and Protestant educators, the disputation returned to the early modern Protestant universities, and spilled out into public arenas. Marian Füssel demonstrates how high profile disputations of the early Reformation removed the protections central to their medieval practice. Where previously they had taken place strictly in a university context in Latin, with trained academics serving as judges, now they occurred in public squares, often in the vernacular, with the city fathers deciding the winners. Among Protestants, the use of the syllogism as the basis of argumentation, which had been the foundation of the medieval disputation, was replaced by the authority of Scripture. But with so many competing claims about how Scripture should be interpreted, the disputation became less a means to reach consensus, and could act as a catalyst to escalate conflict, as Kenneth Appold concludes. Investigating the developing practice of dueling in the Holy Roman Empire, Gerd Schwerhoff notes a similar situation, namely that the structure and rules that would eventually come to govern the practice and limit its potential for further conflict were still in the process of being created.

Not only did forums of conflict change, but new literary genres further expanded the reach of conflict, making it increasingly difficult to contain. In general, the explosion of print culture allowed controversy to spread more broadly than ever before, and many authors of the period employed genres and methods tailored to engage a wider public. Investigating the nature of the writings produced during the doctrinal conflicts of the period, many of which were described in their titles as "confessions", Marcus Sandl demonstrates that with a clear performative component, this genre left little room for critique by opponents and little possibility of change of opinion by the author. The result was conflict without any chance for resolution.

Third, it is not surprising that into this new world, efforts to control the spread and impact of conflict also appear, but these efforts often misfired, expanding rather than limiting it. In his excellent article on the Osiander controversy, Henning Jürgens describes how a strategy designed to contain a localized doctrinal conflict led to its multiplication. Osiander's prince, Albrecht of Brandenburg-Ansbach, sent out key documents from both sides of the controversy to other signatories of the Augsburg Confession asking for their assessment, which he referred to collectively as "the judgment of the church." But instead of reaching consensus, the strategy simply spread the controversy more broadly. Ursula Paintner addresses the rise of censorship among Catholics, noting that the Index of Forbidden Books (1559), designed to limit conflict, created it. When Catholic leaders did not widely publicize the existence of the Index, preferring to inform only key members of society of its existence, such as other churchmen and bookmen, (thereby demonstrating what might be called a "semi-public" understanding of the public sphere), Protestants attacked them for their secrecy, insisting on a very different definition of the public sphere, one in which information was completely open.

The picture that emerges from these articles is of a society in transition. New and expanding forums and media allowed for conflict to penetrate society more broadly and deeply than ever before, thereby expanding the public sphere. Efforts to mitigate or limit this conflict were still inchoate and only partially successful or even detrimental. And religion continued to play a key role as a theme, but also as an epistemological basis for positions in specific conflicts.

The particular strength of the volume is that it moves our understanding of the period's conflicts beyond the notion that they were merely the futile practice of pugnacious theologians ultimately detrimental to society, to a deeper understanding of the role the culture of conflict played in the emergence of modern Western society. But the volume serves as a provocative starting point; further research followed by more a thorough synthesis are required before we have a definitive picture of these phenomena.