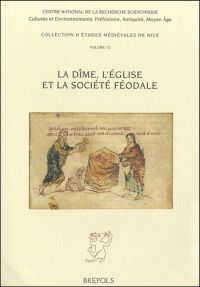 The book, La Dîme, L'Église et la Société Féodale, is a collection of articles which focus upon the tithe and its varying aspects that have shaped not only its evolution throughout the medieval period, but also its respective use by historians to illuminate the secular and religious communities engaged in its collection, dispersal, and consolidation within medieval society. Due to its origins in a series of discussions and a program of research hosted at the Université Nice Sophia Antipolis in the years of 2007-2008, many of the articles refer to the tithe within the context of specific French regions or focus their research upon French examples, but this does not limit the work in its usefulness to the medieval scholar whose interests lie in other geographical areas. Although the editor states that the work does not present a comprehensive thesis, the articles within this collection insinuate a challenge to the existing scholarly appreciation and use of the tithe both within France and in the larger context of medieval society.

This review will not attempt to delineate the intricacies of each scholarly study within the book, but will highlight a general impression of the work and the nature of the articles. The book's opening article by Michel Lauwers provides a detailed general description of the tithe and its significance within the medieval world. It helps to set the tone for the work, providing a good foundation to a reader new to the subject while introducing themes of its historical interpretation and a historiographical perspective to the reader more familiar with the tithe. This opening piece does a very good job of framing the work and introducing the theme that, although not explicitly discussed in each subsequent article, resonates throughout the work: namely the definition and interpretation of the tithe within secondary scholarship. Lauwers maintains that this is a definition that should be refined and he leaves it open to interpretation for subsequent authors to illuminate or allude to in diverse ways, either within their region-specific articles or through a more theoretical analysis. Most of the authors view tithes not only as sources of income, but also as records of economic exchange and growth. Furthermore they see the tithe as an illustrative tool of societal classification and the changes that occurred within that classification: whether it be distinctions concerning the secular and religious collection of tithes, or the distinction and focus upon monastic tithes versus the tithes of parish churches.

The sixteen articles that follow Lauwers' introduction then proceed to take up this goal of redefinition and re-imagination of the tithe within a variety of contexts. Some consist of an in-depth analysis of tithes in specific regions that include, but are not limited to: Champagne (by Luigi Provero); Toulouse (by Florent Hautefeuille); and Provence (pieces by Thierry Pécout and Germain Butard). Others focus upon the tithe in the larger context of understanding the collection of tithes within specific social circumstances: circumstances that include: churches and monasteries (as illuminated in the articles by Guy Lobrichon, Florian Mazel, Grégory Combalbert, and Cécile Caby), secular agents (as in the articles by Didier Panfili and Simone Collavini), and a combination of the two, providing a larger glimpse of the tithe and the medieval Christian community as a whole (prime examples being those pieces by Emmanuel Bain, Jean-Pierre Devroey, and Valentina Toneatto). While most of these studies are restricted geographically to a particular region, they attempt to surpass their regionality and speak to the nature of tithes as a whole.

The articles by Elsa Marmursztejn, describing contemporary medieval scholarly debates concerning tithes, and Stéphanie Le Briz-Orgeur, focusing on the tithe motif in the context of the "Tithe of Judas" and the Passion help provide further contextualization as they illuminate the contemporary importance of tithes within medieval society and culture. Finally, the inclusion of the article by Isabelle Rosé concerning the specific vocabulary and form of tithes provides a hyper-textual study upon the nature of the tithe and its frequency within charters from Bourgogne. The book is then concluded with the work of Mathieu Arnoux who provides a closing summary, focusing again on the topic of adapting our understanding of the tithe, in all its diverse forms, and its presence within medieval society to a wider perspective. He highlights directions in which the discussion might continue, as well as some of the challenges that loom in the future of that discussion, serving as a fitting conclusion to the work.

All of the articles within the work demonstrate a high level of research and utilization of source materials. In each of the articles, the scholar has effectively demonstrated a deep familiarity with the subject as well as the primary and secondary materials that form the basis of his or her conclusions. Copious notes illustrate the painstaking nature of the scholarship involved in each of the articles, providing the reader with a "road map" from which to carry on the work that these scholars have started with their respective pieces. It is this abundant nature of source reference that makes this collection especially useful to a beginner to this topical field, presenting an impressive amount of source material in a single volume of scholarship. Furthermore, the inclusion of an index of names and an index of places further enhance the usefulness of the work, allowing for quick reference and focus.

In reading the volume, it is important to note that although the work presents a very efficient and compelling argument for the adaptation or refinement of the scholarly appreciation of the tithe and its role within medieval society, the reader is unfortunately left with an unsatisfactory resolution. Although the editor indicates that it is not the purpose of the work to provide a new paradigm, the lack of such a conclusion is disappointing. While this may indeed spark the debate that the authors of these articles wish to engender, it also leaves the reader feeling intellectually unfulfilled. And so, while it appears that the authors have succeeded in challenging the present model of the tithe and its meaning for present historical scholars, the lack of a replacement schema lessens the overall effectiveness of the work. Although some might not see this a negative, and it certainly does not diminish the usefulness of each author's article within the work, it only reinforces the nature of the volume in that it is a collection of articles centered around a central topic, and not an unified piece of scholarship that presents a new comprehensive thesis. Yet, it is perhaps unfair to critique the work on a deficiency or purpose that it definitively does not seek or maintain as a goal. Overall this book is an impressive and useful collection of scholarship that is significant for anyone studying French economic history, monastic communities, or tithes; and is an excellent resource for the medieval historian in general. Furthermore, the inclusion of a sound foundation of reference materials makes the work a true resource for the graduate student or professor alike.