Mark Pittaway: From the Vanguard to the Margins: Workers in Hungary, 1939 to the Present. Selected Essays. Edited by Adam Fabry, Leiden / Boston: Brill 2014 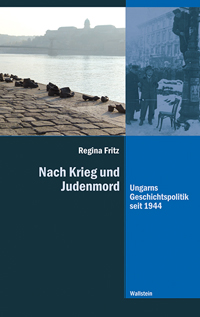 Regina Fritz' dissertation studies the ways in which Hungarian politicians and lobbyists discussed what later became known as the Holocaust in Hungary, that is: the deportation and murder of about half a million people defined by the laws of the time as "Jews". Her work is based on the extensive use of archival and published materials and covers the period between the end of World War II and the year 2006. The author, however, dedicates the major part of her book to the period between 1945 and 1948 which makes perfect sense. These years, before the establishment of a Stalinist dictatorship, saw the most open debate about the Hungarian involvement in the Holocaust. Most of the arguments and standpoints developed during this short period of (very limited) pluralism would later often be repeated in one or another form, and by representatives of different political or social groups. Within this discourse the main question concerns the responsibility of Hungarian society with regard to the murder of hundreds of thousands of men, women and children in 1944/45: The question whether the "Holocaust after the Holocaust" (Götz Aly, Christian Gerlach), which mostly took place during the short period between May and July 1944, was a Hungarian or a German crime has remained a matter of dispute until today.

On the one hand, the Horthy regime which was established in 1919 after a bloody anticommunist campaign during which also some hundred innocent Jews were killed ("White Terror" of 1919) together with Bolsheviks and others, had a long history of antisemitic legislation dating back to 1920, and had introduced anti-Jewish laws in 1938 and 1939 based on extreme racist ideas. The regime often employed antisemitic or "Christian national" ideas throughout the Horthy era, connecting it to the irredentist nationalism, the campaigns against the peace treaty of Trianon (1920) and its consequences. After the destruction of the radical left and the taming of Social Democracy, social protest was more and more represented by the growing number of Hungarian right wing movements which gained in 1939 about 800 000 out of 4 million votes. At that time, many members of the Hungarian armed forces and the gendarmerie openly sympathized with Nazi Germany. Some actively supported the deportations, and in a few cases even participated in massacres of Jews. The most notorious happened after the invasion of Yugoslavia in 1941, when Hungarian army units killed about 1000 Jews and several thousand Serbs in the town of Novi Sad. During the chaos at the end of the war, when Budapest was already besieged by the Red Army, Hungarian Fascists murdered several thousand Jews in that city. And finally, the close alliance with Germany, which was upheld until the very end of the war, and the weakness of resistance against it, weigh heavy on Hungarian society. Some Hungarians also wanted to make sure that their Jewish neighbors would never return because they had stolen their houses, jewels, furniture and other belongings after the ghettoization and deportation.

Those who defend Hungarian society from accusations of mass complicity argue that the Horthy regime was a semi-authoritarian state, and that it was more than ambivalent about the alliance with Germany. In fact, Regent Horthy attempted to pull out of the war in October 1944. After the failure of this attempt Horthy was put into custody and German troops invaded the country. As long as Horthy was fully in power, most of the almost 800 000 Jews in Hungary - many of them refugees from other countries - were the victims of discrimination, but did not need to fear for their lives, while millions of Jews were being killed in Poland and other areas under German occupation.

Soon after the war, the Communists and the very popular Smallholders' Party would claim that the Horthy regime had not represented Hungarian society as a whole, and therefore only some landowners and high ranking bureaucrats together with a few Hungarian Fascists were to blame for the crimes against the Jewish population. The fact, that, exceptional for East Central Europe, even after the war an estimated 100 000 or more Jews survived in Budapest - some thousands would leave the country later, especially during the 1956 revolution - is also sometimes used as an argument in defense of Hungarian society. They claim that this was only possible because many Jews were rescued by Non-Jewish Hungarians.

Fritz shows how strongly the discourse on the Holocaust was connected to internal and external political questions, beginning with the peace treaty negotiations in Paris (1947) and extending to a law on rehabilitating Jewish victims passed, much later, in 2004, when Hungary was a member of the European Union and when, almost overnight, a Holocaust Museum was opened in Budapest. She describes how, after 1989, other victim groups, mostly those non-Jewish Hungarians who suffered from the terror of the Communist party during the Stalinist period and after the crushing of the 1956 revolution, started to compete with the Jewish survivors and their representatives for public recognition making the politics of history more complicated, and referring to similar developments in other post-Communist countries. The author identifies roughly five periods of the debate: After the immediate post-war phase followed the Stalinist period up to the revolution of 1956, then an early and a late period of the Kádár regime, slowly passing into the transition period into democracy in the mid-1980s, and finally the post-communist period.

Like all contested political questions, the problem of memory of the Holocaust was also enmeshed with daily political problems. While there were attempts to punish the perpetrators after 1945, the Communists soon turned the "People's courts" into instruments against their political rivals without considering whether they were guilty of war crimes or not. Sometimes the Moscovite leadership of the party, although dominated by comrades of Jewish background, would even stir antisemitic sentiments. When they initiated a campaign against black marketeers in 1946, outbreaks of violence against Jewish survivors occurred in Miskolc and in other places. After the establishment of the dictatorship, the party banned the word "Jew" from official language and the victims of Nazism were represented as anti-Fascists, while at the same time restrictions were imposed on Jewish religious groups. Commemorations of the Holocaust were now regarded as "private events" even when thousands of survivors attended. Party leader Kádár, who denounced the revolutionaries of 1956 as "Fascists," extended the "antifascist" narrative, representing the Communists as the only ones who had resisted Fascism, in an attempt to raise their moral reputation. In the 1960s and 1970s the regime slowly lowered barriers against public discussion of topics like the Holocaust and Antisemitism. New films and books began to deal with the past and present of these controversial issues. The author is right to stress that open discussions in fact started much earlier than 1989.

The book suffers to some extent from the fact that Fritz understands the politics of history in a very narrow fashion, and is not prepared to question critically the existing literature. The approach of Geschichtspolitik almost inevitably leads her to negative conclusions: Whatever Hungarian politicians did regarding the memory of the Holocaust was never enough or adequate. This may be true, but what may be regarded as an adequate political approach to the memory of the Holocaust? Is it the West German example? But is the Hungarian case really comparable, especially if we take the extreme brutality of Soviet "liberation" and occupation into consideration? Whichever way we take it, Nach Krieg und Judenmord offers an extremely useful overview over the debates about the Holocaust in Hungary, and adds new archival materials to the ongoing research of a very complex topic.