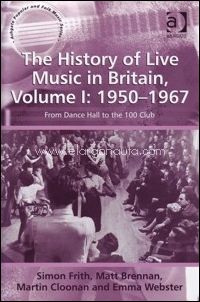 In the course of the 20 th century, mechanical and electronic media have transformed entertainment by turning it from something that needed to be produced and consumed 'live' and on-site into something which could be stored, reproduced and distributed as data carriers and electromagnetic waves. While the growth of recorded culture has certainly been a major trend, the almost exclusive focus on these entertainment media has led social scientists and historians to neglect important aspects of contemporary culture.

Firstly, live performances never disappeared from the entertainment ecology during the age of electronic media. This becomes evident today as live events draw huge paying audiences and have indeed moved to the centre of the entertainment business. Secondly, the concentration on recorded culture has faded out the work invested into cultural objects and the interplay of people engaged in the supply of culture. Culture is mostly studied as either a manifestation of collective values, norms and beliefs or an object of active appropriation, whereas there is far less concern for the actors, structures and processes of cultural production. And thirdly, the focus on recorded culture downplayed the role of spaces in cultural consumption. While it is true that electronic media has allowed people to watch or listen to their favourite content far away from the place of its origin, entertainment venues and their conventions have shaped the way people engage with culture throughout the 20 th century.

Venues, work and the changing organisation of the live music business are among the main issues of the book under review. It is the first volume in a projected series of three which 'aims to provide a social history of music in Britain since the 1950s' (preface). The first volume is concerned with the years from about 1950 to 1967. It starts with the restoration of the live music business after the war and ends when popular music was about to be taken 'seriously' in both economic and artistic terms. The book covers a turbulent period marked by major technological and stylistic changes. It keeps in view the developments of both old and new forms of musical entertainment: On the one hand, it analyses the decline of live music in variety theatres, dance halls and cinemas until about 1960. In this context, it describes the efforts of established promoters and musicians to either preserve the status quo or adapt to a changing environment. On the other hand, it traces the rise of smaller venues such as jazz, skiffle, rock and folk clubs. These were increasingly run by a new cohort of promoters and frequented by audiences in their teens and twenties.

Looking at the whole range of musical entertainment and venues (including, to a lesser extent, classical concerts) the authors carve out numerous overlaps between old and new musical cultures. In this way, they show that the history of popular music has been far more complex and uneven than the record market and its sales charts suggests. Rock 'n' Roll, for instance, got its first opening in Britain on the variety stage where singers like Johnny Ray were backed by the resident orchestras and sandwiched between traditional variety acts (170). Cinemas hosted skiffle contests (which were central for a new do-it-yourself music scene of the late 1950s) in an attempt to cater to the increasingly important teenager market (99). Furthermore, the authors suggest that the ban on American musicians to perform in Britain, enforced by an older generation of unionised dance musicians to close the domestic labour market, ultimately benefited a younger generation of beat musicians. Protected against transatlantic competition, the Beatles and others had the chance to mature as performers and turn the tide, starting what became known as the 'British Invasion' of America (87f.). Overall, the established institutions as well as the show biz establishment in many ways helped rather than hindered the formation of the musical culture which is now regarded as typical for the 1960s.

Focussing on venues, musicians and promoters, the authors find that in the 1950s popular music to a large degree crossed generic and social boundaries. Neither dance halls and variety theatres nor jazz clubs offered one particular kind of music to one particular kind of audience. This becomes especially apparent in clubs, where local networks linked performers of jazz, rock 'n' roll, folk and skiffle (94). The same was true for the audiences of these still very fluid genres who congregated in the same spaces (174).

This situation changed since around 1960, when promoters, practitioners and followers of folk began to draw sharp lines between 'pure' folk and 'commercial' music and connected their activities with political causes such as nuclear disarmament. This charge of culture with aesthetic value and political relevance was brought about by art school and university students who were concerned with music as self-expression. It created social divisions between them and working-class teenagers who had been striving for entertainment and possibly a career in the music business (109-113). Social divisions were further entrenched as students who took their pop music seriously set up a university touring circuit and subsequently became very influential in the British music business.

The first volume of the history of live music in Britain proposes a shift of focus from records and their business, culture and consumption to live music and its organisation, spaces and performances. The result is a broad and complex picture which encompasses the production and consumption of music and explores important topics such as venues and work in the music business. Given the growing interest in the history of work and labour relations, and taking into account that 1960s 'creative industries' were at the forefront of 'post-industrial' labour, the world of cultural workers surely deserves attention among historians.

The book has also some shortcomings. The main one is that the book, instead of following narrative strands, approaches its topic from various aspects in seven topical chapters. While these chapters provide expertly and very effective overviews over, for instance, the state of the British record industry and the licensing regulations during the period, they tend to develop into excursions which are not always consistently linked to the main topic. This results in a number of cross-references and some repetitions, and the reader sometimes has to tease out the story himself. In other cases, one would have also wished for threads to be followed up. The early history of discotheques and disc-jockeys is a case in point. These are mentioned as part of the live music industry (x), but issues like DJs' career trajectory, work practices and position in the industry as well as sociality in discotheques remain largely elusive.

Having said that, this 'social history of music in Britain' written by a team of popular music scholars (which in Britain often means: trained social scientists with first-hand knowledge of the music business) has a lot to offer to any 'certified' historian with an interest in post-war popular culture and music in particular. Given that these researchers have secured and begun to make use of the British Musicians' Union archive it seems advisable that historians take notice and seek collaboration, just to make sure that this topic does not bypass our discipline.