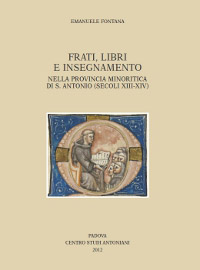 The study of the complex relation between Franciscans and learning in the Middle Ages has known a remarkable development since the pioneering book Histoire des études dans l'Ordre de Saint François by Hilarin Felder, written more than one hundred years ago. The first phases of research expressed the interest of the Franciscan order in finding the principles of its intellectual identity by defining the profiles of influential Franciscan masters. The following phase of research focused on editing different types of sources, a work that set the basis for the next phase, centred on the institutionalization of learning through schools and programmes of study. These studies were complemented by research on the development of the corpus of regulations concerning learning, study and use of books. Recent years have seen a growing interest in topics such as the development of Franciscan libraries, the distribution and organization of the schools of the order, and the dynamics of the education of friars in the universities.

Emanuele Fontana offers a valuable contribution to this tradition with his volume on Franciscan friars, books and teaching in the medieval province of Sant'Antonio. On the one hand, the book offers a description of the development of the network of Franciscan schools, or studia, in the province of Sant'Antonio, which roughly corresponds to Northern Italy. On the other hand, it discusses the training and key role of the friars appointed as lectors, or instructors, in the same province. The main purpose of the volume is to study the real extent of the studia in the province of Sant'Antonio before the institution of the theological faculty in Padua, in 1363 (181).

In order to do so the work is divided into two main parts. The first part explores the organization of studies during the thirteenth and fourteenth centuries. The second part offers a collection of profiles of masters, lectors and bachelors active in the province of Sant'Antonio from 1260 to 1363. The work is complemented by an appendix with an edition of relevant unpublished sources.

The starting point of the discussion is the corpus of Franciscan regulations concerning the general organization of studies. Moving forward, the second chapter describes the specific set of regulations concerning the province of Sant'Antonio, the activity of lectors, the distribution of Franciscan schools in the province, and the institution of the theological faculty in Padua in 1363. These considerations would be incomplete without the discussion on production, use and circulation of manuscripts. Accordingly, Fontana dedicates the third chapter to issues such as the Franciscan rule and use of books, the forms of acquisition of books in the province, and the typology and description of the manuscripts used by the friars.

This discussion is complemented by the presentation, in the fourth chapter, of a selection of works composed by lectors active in the province of Sant'Antonio. Among the most interesting cases are such influential masters as Luca Lector, Paolino of Venice, Philip of Moncalieri, and Giovanni Longo da Mortegliano. This set is complemented by an extended section containing the profiles of masters, lectors and bachelors active in the province during the thirteenth and fourteenth centuries.

Three examples could illustrate the range of topics discussed in the book.

First, the lector, a relatively unknown agent of the Franciscan system of education, who played a determinant role from the earliest period, as shown by the figures of Antonio of Padua and Haymo of Faversham. The arrival of bachelors to accompany lectors from the fourteenth century onwards suggests a remarkable adaptability of the provincial organization in order to face the challenges produced by the swift growth of the Franciscan network of studia. The increasing importance of lectors is shown by the fact that they were active writers, and constituted a group that guaranteed the continuous production of texts useful for the education and training of the friars (145-46). Some of them were promoted to positions of responsibility, and, with time, it was not unusual to find Franciscan bishops who had been lectors.

The second example concerns books and practices of study in the province. Some examples of acquisition of manuscripts confirm an interesting fact, namely, the continuous interaction, if not collaboration, between laity, Franciscan friars and members of other orders, especially Dominicans, in order to satisfy the need for provision of books (142-43).

The third example regards regulations on learning, study and use of books. The case of the province of Sant'Antonio effectively illustrates the distance between general frames of regulations and specific practices, usually determined by unpredictable circumstances.

Undoubtedly, one of the main virtues of this work is to present lectors as protagonists of the Franciscan intellectual life within a comprehensive overview of the situation of studies. In this sense, this work could be understood as a suitable continuation of the research carried out by Paolo Marangon in past years. It is interesting, though, that Fontana has chosen to follow different approaches for each one of the major parts of his work, that is, a case-study approach for the first part, and a more matter-of-fact approach for the second. This could leave the impression that the second part plays a subsidiary role, an impression that certainly would be unfair to the amount of research required to complete the profiles.

One further observation could be added, and it regards the discussion on use, production and circulation of books. Surprisingly, the work by Neslihan &#350enocak is not taken into consideration, missing an excellent opportunity to establish further comparisons with the development of different practices of production and circulation of books in a wider context.</p> <p>The significant contributions to Franciscan intellectual history made by this book suggest new paths to follow and confirm the vitality of this field of research. In this sense, the volume is a necessary tool of reference for any study concerning the intellectual history of the province, and the Franciscan order in general, and underlines the significant impact of the publishing endeavour carried out by the Centro Studi Antoniani.</p> <p class="italic" style="text-align: right">René Hernández Vera </p> </div> </div> </div> <div id="page_footer"> <div class="ie6_font_size" id="separator"></div> <p>issn 1618-6168 / www.sehepunkte.de <img height="10" src="/images/sp10.jpg" width="10"> </p> </div> </div> </body> </html>