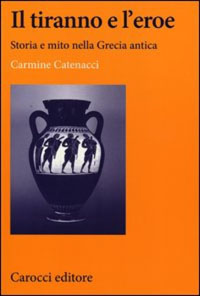 The book of Carmine Catenacci is the updated reprint of an anthropological essay firstly published in 1996 in a slightly smaller format [1], and as such it was already reviewed a few times [2]; the first edition also had a register of Greek and Latin sources that has been omitted in the present edition.

In ordinary language the concept of 'hero' might seem to be in opposition to that of 'tyrant'. The author's intent however is to draw the archetypal figure of an emerging dynast, be it either the mythological 'hero' or the historical 'tyrant', whose life and deeds quite inevitably fall into a series of patterns. It is based on the assumption that mythological heroes living in the Mycenean past can be associated sic et simpliciter, in an anthropological dimension, with the historical tyrants emerging from the dark ages of Greece. That is, the author develops into a general theory the alleged association, to be found in former literature, between the mythical hero Oedipus and the historical tyrants of Corinth, Cypselus and Periander. [3] However neither in this case nor for the others the association is pursued systematically.

After a general introduction the book is articulated into six chapters, dealing with single aspects of the hero/tyrant life. Chapter one is about oracular omens, and it is subdivided into: a) omens that accompany the hero/tyrant's birth, and: b) omens that predict his ascent to power or his death. Paramount under the first cathegory is the history of Cypselus, with his multiple oracles, but also Orthagoras, the future tyrant of Sicyon, and Peisistratus, the future tyrant of Athens, were affected by oracles at their birth. Discussion of historical cases is not restricted to tyrants only: the Macedonian king Perdiccas, the Persian king Cyrus, the Hellenistic king Seleucus also come into account, but comparative projections may touch upon omens affecting Romulus and the prophet Mohammed as well. Predictory signs however were not always favourable, like in the famous tale of Policrates' ring. A further question is wether the oracles were manipulated and in the interest of who. This chapter is however so rich in examples that it is difficult to reproduce here the author's argomentation in detail.

Chapter 2 concerns the role of the tyrant/hero's parents. Given the broad range of historical examples he is willing to take into account, it is strange that Catenacci does not mention here the tale of Jesus' infancy and the role of Mary and Joseph. Heroes' and tyrants' parents as well, not always fully realizing the extraordinary destiny of their sons, protect them from external dangers that threaten them from the moment of their birth. So it is, among many other examples, in the history of Labda, protecting his son Cypselus from being killed by his relatives Bacchiadai.

Chapter 4 is about the tyrant's male and female offspring, his relation to sons and daughters. Paradigmatic is the history of Periander's relation to Lycophron, the smart son [4], as the young man grows hostile to his father for having killed his mother Melissa. The son is banned from home and a general prohibition is issued by Periander to anybody of giving him shelter or even talking to him. Lycophron, as he wanders through the city in a state of ravagement, is approached by the pitying father, who tries to reconcile with him only to be rebuked for having violated his own edict. Lycophron's sister will also play a role in an extreme effort of reconciliation, that will only bring to Lycophron's death at the hands of the Corcyraeans.

Chapter 5 is about the tyrant's wit, his intellectual ability, leading in a few cases also to his inclusion into the canon of the Seven Wise Men. His intelligence is displayed in interpreting the divine signs concerning his fate, be these oracles or dreams, but also in seizing the power with stratagems, or exercising it with discernment (also in his various accomplishments), or preventing his enemies' plots. Not everybody agrees, however, about the lucky fate of the tyrant, that does not account for the danger of his condition.

A final (and shorter) chapter is devoted to the tyrant's death. Only rarely this happened by natural causes. More frequently the tyrant meets his fate violently, either in war or assassinated. His eternal rest is also at risk, since his body is sometimes thrown away unburied, sometimes even unearthed: that is why the tyrant Periander and Amasis, the king of Egypt, did excogitate stratagems to let their spoils concealed.

I have read Catenacci's book with much interest, I learned much from it, and I could not find a specific fault. It is rather broad in conception, dense in argumentation, its limit being perhaps the lack of any definite historical, philological or even anthropological conclusion. To say it in other words I cannot say that this very learned, very well written book [5], has built up in me any new idea, or has changed substantially the opinions I previously had about tyranny.

[5] I could not find any typo. The use of lower-case instead of upper-case for initials of peoples' names (e.g. 'greci', 'persiani') is however a little disturbing and contrary to Italian custom.