Vasileios I. Anastasiadis: Interest and Self-Interest in Ancient Athens 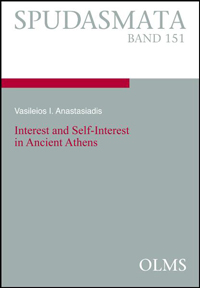 Vasileios Anastasiadis takes up an important and timely subject in this monograph that seeks to illuminate interest and self-interest in an Athenian context by close attention to sumpherō and its derivatives in Athenian sources. Anastasiadis is interested in the development of this vocabulary over time in a range of classical authors, and explores how this may bear on current debates over the place of personal and collective interests in Athens. In my view, Anastasiadis offers useful observations concerning this vocabulary and some insightful readings of how diverse authors employ it, but is less successful in presenting a coherent picture of self-interest in its broader Athenian context.

Several features of this monograph make it challenging to read. It is difficult to identify a central argument; there is a degree of redundancy since the same authors tend to crop up in each of the topically oriented chapters; footnotes often occupy a half page or more, as Anastasiadis seeks to survey the vast scholarship on the issues and authors that he treats. There are also substantial problems on the level of diction and sentence structure - I often found myself re-reading sentences and still not being sure of their meaning. This is unfortunate, as Anastasiadis clearly has insights to offer, and exhibits good instincts in dealing with complex material and the modern debates surrounding this.

After a brief Introduction (six heavily footnoted pages) makes the case that we must look closely at the Greek vocabulary of self-interest to understand this concept in its ancient context, Chapter I: Expressing interest in words opens: "All Greek theoretical approaches to interest revolve round the verb sumpherō and its derivatives, and this gives it an absolute precedence over its synonyms and semantic cognates" (19). In this chapter, which may be the most successful in the book, Anastasiadis productively surveys sumpherō and its derivatives in our sources, along with a range of synonyms or near synonyms of which he carefully teases out the nuances; he notes, in the case of sumpherō and its derivatives, a shift in meaning toward "expedience" in the classical period from an earlier sense of what is "fitting", "suitable" or "compatible" but observes "the ambiguity between convenience and utility remained intense" (22).

Chapter II: From social congregation to the ethics of sumpheron, considers first "self-interest and primitive motivation," including sophistic theories of the role of interest in the origins of human society and of its integral connection with human nature; J. de Romilly's lucid account of this in The Great Sophists in Periclean Athens, Oxford, 1992, might have been productively consulted and cited here. It then turns to a discussion of advantage in Thucydides' Melian Dialogue and in Antiphon and Thrasymachus, and concludes with a close look at the interplay of justice and advantage - whether presented as alternatives or as virtual equivalences - in Thucydides, Plato, Aristotle, and elsewhere.

Chapter III: True sumpheron and its deviations surveys the efforts of Isocrates, Plato, Aristotle, and others to construct a moral framework in which agents, whether individuals or states, would seek to serve their own best interests through just behavior, and thus reject a "superficial perception of advantage" that might lead to the reckless pursuit of pleasure or indulgence of greed in favor of the pursuit of a "true, real and profound, advantage" (108). In discussing the operations of the Athenian state, Anastasiadis observes that an orator like Demosthenes might exhort his audience in the Assembly to follow his advice as to their true advantage and reject the advice of his rivals, though with less ultimate concern about achieving a moral end than his philosophical counterparts. Anastasiadis also explores how in Athens the pursuit of common interests could be elevated over that of private interests in public discourse as a sort of true sumpheron; he emphatically and rightly rejects, however, Gabriel Herman's utopianism in Morality and Behaviour in Democratic Athen (Cambridge 2006), which mistakes this patriotic ideal for a social reality.

Chapter IV: Does sumpheron need an excuse? takes up, among other things, the question of Greek individualism in light of the Athenian discussion of advantage, common and private. Anastasiadis challenges the notion that Athenian individuals were called upon to suppress their interests in serving the common good, which is hard to reconcile with the freedom of democratic citizens to evaluate what their own self-interests are and "the competitive spirit in which [...] both creative individuality and a strong urge for freedom originated" (178). Instead, collective action was meant to maximize the mutual interests of citizens, and therefore "the individual considered it a primary duty - and self-interest - to contribute to the maintenance and prosperity of the polis" (172). As Anastasiadis puts it in his Epilogue, "Individual self-interests should be neither integrated into the melting pot of the polis interest nor dismissed as insignificant" under the Athenian democracy (192). Anastasiadis thus concurs with my account of self-interest in chapter one of The Bad Citizen in Classical Athen (Cambridge, 2006), as he notes at several points (the citation of "Christ 1980" on p. 148 n. 143 and the view attributed to me there are erroneous, however).

Anastasiadis' analysis could be improved in two areas. First, at several points, he suggests that Athenian perceptions of self-interest and willingness to pursue selfish interests evolved over time (139, 187, 193). This is an interesting suggestion, but Anastasiadis does not provide much evidence to support this historical claim. Second, he distinguishes too sharply between elite writers, like Plato, Isocrates, and Aristotle, who argue for the pursuit of advantage within a moral framework, and orators, who offer mass audiences in the Assembly "an outrageously simplistic and commonplace idea of human self-interestedness" (122). As Anastasiadis acknowledges, however, orators addressing the Assembly do invoke both advantage and justice; and this, it seems, suggests that popular audiences at least wished to believe that their policies partook of both advantage and justice (see Peter Hunt's recent discussion of this in War, Peace, and Alliance in Demosthenes' Athens, Cambridge, 2010, 154-84, and my own somewhat darker assessment of this material in The Limits of Altruism in Democratic Athens, Cambridge, 2012, 163-76). In any event, Anastasiadis contributes in this monograph to the ongoing debate concerning self-interest in Athens, and scholars will want to consult his discussion of sumpherō and its derivatives in Athenian sources.