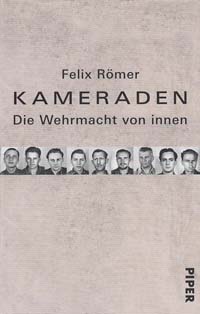 This is Felix Römer's second major work since 2008. His book on the Commissar Order demonstrated beyond reasonable doubt that in 1941/42 the overwhelming majority of German units in Russia summarily executed - with conviction and meticulous attention to detail - most captured Soviet political commissars. [1] That finding, based on exhaustive research throughout the surviving records of the entire Ostheer, destroyed what remained of the enduring and politically convenient post-war myth that the "criminal orders" of Hitler and the army high command found only sporadic acceptance among the fighting troops.

Römer has now published an equally ground-breaking work on the mentalities of National Socialist Germany's soldiers, sailors, and airmen. Like Soldaten [2], the notably successful book by Sönke Neitzel and Harald Welzer, Römer's work has emerged from the large-scale German research project organized to exploit the covert transcripts of prisoner-of-war conversations recorded by Britain's Combined Services Detailed Interrogation Centre (CSDIC). But with a marked difference: Kameraden rests on the surviving materials from Ft. Hunt, the United States adaptation of CSDIC techniques - a joint army-navy interrogation center near Washington, D.C. established in 1942. The British transcripts provide vivid conversational snapshots, but lack context. Except in the case of senior officers whose careers are known from other sources, the speakers are virtual unknowns, and the surviving CSDIC records offer only inferential evidence of the CSDIC's interests, biases, and criteria for recording conversations. Conclusions based on CSDIC materials are thus in part merely impressionistic.

The American files are more systematic and far richer. Ft. Hunt handled many fewer prisoners over shorter stays than the CSDIC camps - a total of 3451 for one to two weeks each - but meticulously documented almost every case. The bureaucracy generated a file jacket and a personal details sheet for each German prisoner. By the time a man left Ft. Hunt for a normal POW camp in the vast interior of the United States, his file contained the documents generated during his stay: a detailed biographical summary; interrogation reports, opinion research results (the "Morale Questionnaire"), transcripts of surreptitiously recorded conversations with cell-mates, and even diary entries by the listeners that documented hour by hour the immediate context of the recorded utterances. The prisoner population itself likewise suggested careful design. Ft. Hunt inmates constituted a representative cross-section of the Wehrmacht: roughly half enlisted men, a third non-commissioned officers, and a sixth officers.

The interests and methods of the Ft. Hunt organization thus correlate seamlessly with Römer's research objectives. He begins with an introduction to the scholarly context and a chapter on the routine at Ft. Hunt. Seven topical chapters follow, covering ideology, soldierly ethos, comradeship, combat morale, leadership, combat and death, and war crimes. Römer's work - as suggested both in his text and in Johannes Hürter's agreeably barbed preface - stands in stark opposition to the thesis advanced with notable fanfare in the Neitzel-Welzer book. Soldaten employed a mechanistic tool of 1960s and 1970s North American sociology and social psychology, "frame analysis" (Referenzrahmenanalyse), to banish to the periphery of Wehrmacht consciousness and of battlefield events all considerations the authors deemed unimportant. Politics, ideology, and the peculiarities of Germany's military and national cultures figured as inconsequential background influences. German soldiers ostensibly fought not from "conviction" but merely "because fighting is their job"; what counted for Welzer and Neitzel were the immediate situational and group pressures acting upon the combatants. Social-psychological blinkers in turn imposed a startling conclusion: the indiscriminate violence of the German Wehrmacht was "no more 'National Socialist' than for instance the violence that British or American soldiers employed". [3]

Römer has little patience with this quasi-apologetic conjecture or with the pseudo-anthropological platitudes about warfare in general that accompany it. He accepts that situational and group pressures play a role at small-unit level, although - as he wisely insists - "the group in the end was no more than the sum of its individual members" (381, 473-474). And he consequently locates the key both to the Wehrmacht's fighting power and to its casual murderousness in the skills, attitudes, and convictions of its individual members (380-381). Their deeds, throughout Germany's second and final hegemonic war - indiscriminate Wehrmacht and SS massacres of prisoners, "partisans", and civilians, the army's coldly deliberate starvation-murder of several million Russian prisoners, and its support for and intermittent participation in the "Final Solution" - confirm beyond doubt German exceptionalism; German violence was peculiar (412). That the men at Ft. Hunt spoke only rarely of ideology or politics merely testifies, Römer persuasively suggests, to a loyalty and commitment to Führer, regime, and nation so self-evident that talk was superfluous (63-70, 110, 170, 470-471). Morale Questionnaire results for 1944 - as National Socialist Germany descended into final defeat - registered faith in Hitler by over 60 percent of the prisoners. Perhaps even more significantly for combat performance, the overwhelming majority identified unshakably with the Wehrmacht itself. Over 75 percent praised their own treatment by superiors; service food, weapons, and munitions; and the non-commissioned officers who formed the backbone of the armed forces. Two-thirds praised officer skill and performance, exception made for green junior-officer replacements. Virtually everyone took conspicuous pride in the Wehrmacht's perceived absolute superiority in "fighting qualities". And until late 1944 almost half still believed in German victory (81, 90, 116-117, 211-213, 215, 315-316, 477).

Unlike the CSDIC materials, the Ft. Hunt files permit detailed analysis of the background factors correlated with particular attitudes: age, length and type of service, and professional, social, religious, and regional provenance. The least surprising result is that the "Hitler Youth generation" was most fanatically disposed, and those reared under the Kaiserreich least so. But men with long combat experience and/or membership in elite units - Waffen-SS, paratroops, and some army divisions - also stood out for bloody-minded commitment. Responses scarcely varied across the social and religious cleavages that had once rent Germany's conspicuously fractured society: workers and Catholics were as committed as the rest. The National Socialist "Volk community" derided since 1945 as mere propaganda, had become "at least up to a point, a piece of social reality" (83, 116, 154). [4]

Römer's fundamental contribution is to challenge head-on the ideology-free model of German combat behavior proposed in Soldaten. He offers instead a novel twist to a dialectical opposition long familiar to students of National Socialist Germany: that between intention and structure (412-413), and analyses the expressed views of mid-level officers in his sample against the background of Wehrmacht doctrine and practice. From the U-Boat captain whose momentary misjudgment had killed his entire crew to the fanatical field-grade officers who had bitterly defended the forts around Metz to the last feasible moment in November-December 1944, German combat leaders fervently believed that their own convictions, intentions, and decisions mattered. As Römer also notes, the Prusso-German mission tactics tradition - Auftragstaktik - demanded and instilled combativeness, initiative, and independent tactical decisiveness (298, 324-326, 352, 352, 358, 366). Yet perhaps Römer is not radical enough; from Moltke the elder's 1888 infantry regulations onward, the army expected "swift judgment and self-reliant action" not merely from infantry leaders, but even from the lowly rifleman. [5] As Römer rightly suggests, the more lethal and chaotic the fight, the less group pressures or leaders' orders count - and the greater the role of individual initiative from below (357-358, 366-367). Unfortunately for the world of enemies that National Socialist Germany had challenged, Wehrmacht tradition and training methods ensured that German units possessed to the bitter end a ready supply of warriors of the necessary stamp.

The intentions of individuals were fundamental to the performance of the German armed forces in another way. Römer elegantly resolves the debate over the role of National Socialist belief in Wehrmacht actions: "Fighting an ideological war did not require that every Landser be a National Socialist - what counted in the first instance was how his commanders saw things" (330). For we know very well - from the Ft. Hunt and CSDIC transcripts and the Wehrmacht's enthusiastic promulgation and punctilious execution of the "criminal orders" in 1941 and after - how those commanders saw things. Römer has rescued the individual combatant from the clutches of the social psychologists. He has persuasively reasserted, with an impressive weight of mutually reinforcing evidence, the proposition that mentalities specific to a given time and place - not anthropological universals - determine how men fight (282, 468-470). That is no small service to historical understanding.