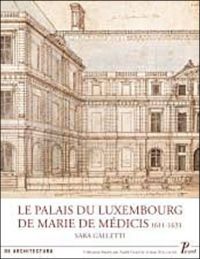 Scholarship on early modern women patrons of architecture has been on the rise in the past few years. [1] Amongst these path-breaking works, stands out Sara Galletti's exhaustive study, which, as a monograph devoted entirely on one woman and one palace, has no parallel in this rising scholarship on female architectural patronage.

Beautifully written in accessible language and thoroughly illustrated with magnificent photographs and drawings, with floor-plans of the space distribution reconstituted by Galletti, the monograph covers all aspects of the construction of the Luxembourg palace during Marie de' Medici's lifetime. These aspects include the initial program conceived by the queen, the political context that led her to be deeply involved in this project, her relationship with the architects that designed and / or completed the project, including Salomon de Brosse (1615-1623), Marin de la Vallée and Pierre Scellier (1624-1629), as well as Jacques Lemercier, Jean Thiriot and Pierre Scellier (1628-1631). It also discusses the interior decoration of the palace, which she commissioned to Italian and French artists, and, most famously, to Rubens, who painted the Cycle Médicis, a series of larger-than-life canvasses depicting Marie de' Medici's biography. An important section is dedicated to the design of the gardens and their evolution after Marie's lifetime. An entire chapter on the spatial distribution of the royal apartments develops the thesis that the palace functioned as a monument to the royal couple (Henri and Marie). This served Marie's need to affirm her legitimacy and power as mother queen. In the last chapter, it shows how the palace's structure and ornaments became precedents that profoundly influenced the classic turn of architecture in France. Very importantly, it discusses in depth its sources, which Galletti studies meticulously, including Marie's correspondence, diplomatic correspondence and memoirs, contracts with architects, gardeners, and all inventories taken during and after Marie's lifetime. Finally, it offers little-known information about the place the Luxembourg took in the life of Marie's heirs: her son Gaston d'Orléans, his second wife, Marguerite de Lorraine, and his daughters, Mademoiselle de Guise and Anne-Marie-Louise de Bourbon, Duchess of Montpensier, better known as La Grande Mademoiselle.

Marie de' Medici was married to Henri IV in 1600 following the annulment of his marriage to Marguerite de Valois, who had been unable to provide him with an heir. Raised in the home of the Medici dynasty, the Palazzo Pitti, Marie was proud of her Florentine background. Soon after the assassination of her husband in 1610, she became the regent and quickly maneuvered her position so as to not be limited to caring for her son, Louis XIII, but to also hold power over political and administrative decisions - a maneuver that was resented by those who feared losing their privileges. As her regency was permeated with conspiracies, tensions and conflicts, Marie's power was rather precarious. Thus, as Galletti brilliantly argues, Marie commissioned the palace of the Luxembourg as a means to project the image of power she actually needed (40). To do so, she capitalized on her position as Henri's widow to construct a palace that would be a monument to the royal couple (44). As Galletti shows, this is particularly evident in the symmetrical distribution of the apartments and galleries of the king and the queen, each located on opposite wings of the palace. Such arrangement emphasized the equal treatment that Henri gave his wife during his lifetime and which was important to highlight during Marie's regency and subsequent years (142).

Marie was also one of the first royal patrons to use the arts as an organized means of cult of the personality. The Medici Cycle, and other works of art that she had keenly distributed throughout her wing, emphasize the image of the warrior and wise queen advised by such powerful figures as Minerva and Bellona. This representational program has few, if no precedents among royal patrons. In addition, Marie commissioned other buildings, such as the château de Verneuil, the aqueduct of Arcueil, and enlargements and renovations to Blois. She also ordered the construction of convents and other religious structures.

Besides being a much-needed contribution to the general architectural history of the seventeenth century in France, Galletti's work is crucial at three fundamental levels. First, it breaks from a tradition in the field that dismisses or minimizes the role of women in the evolution of architecture in France. It emphasizes Marie's involvement at all stages, even when she was exiled in Blois, from the incipient idea of building "une maison pour me loger", a home of her own, to working closely with Salomon de Brosse and others and making choices about structures and decoration. Second, it shows how the palace she built and the architects she sponsored became influential models for subsequent designers - an important point to make to those skeptical that women's projects had any impact on later works. Third, it invokes the symbolic aspect of the palace to affirm the legitimacy and status that the queen needed, contrary to prior interpretations that pointed to the palace as either the retreat of a widow or as a "reflection" of her power - an argument that could not hold in the face of historical facts (20, 40).

The book ends with a short discussion of a much-neglected aspect of the palace, which is the rustication of its walls. Galletti compares to a skin covering a body the effect of the travées, or rows wrapping the courtyard and outward facades of the entire building, lending an additional smooth, polished texture to its walls (210f.). Showing how this rustication differs from the rusticated style of the Palazzo Pitti from which it was inspired, the author shows how Salomon de Brosse had to make choices that would render his style harmonious with the use of the Orders, thus resulting in a "dialogue" rather than an imitation of the architecture of the Florentine palace.

In sum, Sara Galletti's work offers new, rigorous and exhaustive scholarship on Marie's patronage and her Luxembourg palace, and the impact they had on the built landscape of France. It stands as an incontournable source for all scholars specializing in Marie de' Medici and her role in the construction of this architectural landmark.