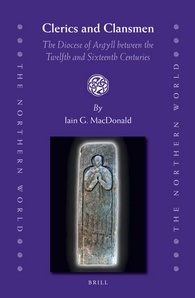 In many senses this is a ground breaking book: it is the first time that a medieval Scottish diocese has been rigorously examined from different but complementary angles. In six chapters, running from 'The origins of the bishopric of Argyll' to 'The origins of the clergy' to 'Pluralism, Non-residency and Pastoral Care', Iain MacDonald rips apart the veil of obfuscation that often surrounds the inner workings of the medieval church in Scotland and assembles a coherent and convincing narrative. At the same time it demonstrates precisely how much work still remains to be done in unveiling the inner workings of the twelve dioceses that together comprised the high medieval Scottish church. The volume is accompanied by a number of maps, tables, and diagrams, all of which are well laid out.

To his credit MacDonald probably chose one of the most difficult Scottish dioceses to research for his doctoral thesis (upon which this book is based). While others, perhaps like Caithness and Ross, will forever remain to a certain degree mysterious thanks to the massive loss of primary source materials, the medieval diocese of Argyll poses a challenge of a different sort, particularly given the well-documented 'difficulties' between a nascent medieval Scottish crown and local lords of Argyll, together with a (in some cases wilful) reluctance of some previous historians to engage with the medieval church in the Gàidhealtachd.

In his opening two chapters the author is rightly cautious in trying to date the foundation of the see. He notes the difficulties associated with utilising the only written source material we have, and logically argues for a twelfth century date, both for the diocese and for its cathedral on the island of Lismore, before the area was subsumed into the Scottish regnum post-1266. For want of evidence, MacDonald also comes to the conclusion that the diocese was carved out of the already existing dioceses of Moray and Dunkeld, likely with the direct involvement of Clann Somhairle and the MacDubhghaill lords of the Isles. Like in Gaelic Ireland, at Lismore the author has noted the presence of a hereditary local lineage of clerics (the MicGille-Mh&#236cheils) until the 1420s, and this section could perhaps have been slightly strengthened by evaluating the presence of what appears to have been a similarly hereditary ecclesiastic kindred in the diocese of Brechin. Also, given the recent advances in studies in the creation of parishes, it is a shame that the author was not side-tracked into a brief discussion of this topic in relation to the diocese of Argyll and particularly into the relationships between pennylands, ouncelands and parishes.

But it is in Chapters three to six that the red meat of this book lies. Topics covered include the origins of the various clergymen who lived and worked in the diocese of Argyll, celibacy (or otherwise), hereditary succession, education, absenteeism, and pastoral care. In these chapters MacDonald has underpinned his writing with a colossal amount of research across a wide and disparate variety of sources - he clearly shows the way to what could be accomplished elsewhere utilising the same methodology. The detail in these chapters is quite stunning and the authorship is accompanied by graphic and cartographic aids, including an updated parochial Fasti for the whole of the diocese of Argyll to 1560.

In the first of these four chapters the author quite rightly draws parallels between changes in the composition of Argyll clergymen to political developments and this whole section is quite convincing, particularly when the aims and aspirations of King James I are being discussed. MacDonald also highlights the importance of local lordship in the provision of local clergy in Argyll and his evaluation of this phenomenon is aided by the provision of genealogical tables for Clann Chaimbeul and Clann Dòmhnaill, particularly the former - which is what we might reasonably expect but MacDonald has confirmed it through judicious use of the primary source materials. Within this section the author also evaluates those clergy of uncertain origin, including a mooted link between 'Beanus' and 'Kenneth Beani' and Clann Mac an Tòisich. While the author is cautious about making such a link, he has forgotten the prevalence of the cult of St Bean in the Clann Mac an Tòisich heartland in upland Moray. What does come as a surprise is that over 66% of illegitimate clergy were the offspring of religious celibates.

Equally valuable to us is MacDonald's analysis of where the Argyll clergy were educated and this demonstrates conformity with wider European trends which evince an upturn in beneficed graduates before 1480, with the foundation of the University of Glasgow (1451) heralding an 'educational revolution' in the diocese. Among the Argyll clergy attending university, by far the greater percentage came from the ranks of Clann Chaimbeul. The final chapter of this book tackles the controversial topics of pluralism and non-residency. Here, the author evaluates the figures for the diocese of Argyll within the changing economic circumstances of the times, rather than in terms of 'degree of corruptness', finding that national trends in clerical behaviour as well as the society, economy, and landscape of Argyll played major parts in pluralism and non-residency.

While there are some minor infelicities present in this text they never detract from the whole. This monograph represents a tremendously valuable addition to existing literature about the medieval church in Scotland; indeed, it not only surpasses what came before, it also offers a clear way forward for new re-evaluations of medieval Scottish dioceses and their clergymen to be made and for this the author is to be heartily congratulated.