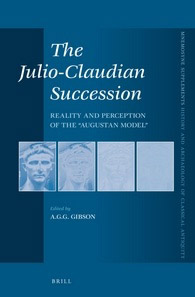 Scholarly interest has shifted from the foundation of the Augustan principate (a topic still dominated by The Roman Revolution) to its continuation, to the "successions" that truly marked the creation of a lasting new political reality. The shift is partly due to the discovery of important new documentary evidence related to the status of the first imperial dynasty, particularly the inscribed copies of decrees and laws related to the death of Tiberius' adopted son Germanicus and the punishment of Cn. Calpurnius Piso for disloyalty towards him. It is also, due, however to the recognition that in the case of Rome's first dynasty the concept of "succession" is much more complex in theory and in practice than has been assumed. The collection of essays edited by A.G.G. Gibson in The Julio-Claudian Succession: Reality and Perception of the "Augustan Model" aims to explicitly recognize this complexity by analyzing distinct aspects of the earliest imperial successions to ask "what makes an emperor? " (16).

Nor surprisingly the essays included began as papers for a conference that explored "different patterns of represenation of Tiberius, Gaius, Claudius, and Nero across a wide variety of different contexts" (10). The construction, representation, and reception of imperial identities remain the primary themes of the printed collection, with less direct attention paid to political or military developments or realities. Neverthless the essays are arranged chronologically by ruler rather than thematically to allow "development of imperial concepts to be revealed" (11). This is an understandable arrangement, even though, for example, Osgood's essay, placed first because it deals with Augustus, is as much an examination of Suetonius and the changing understanding of first emperor as it is of Augustus himself. One regrets, along with the editor, the lack of a paper devoted to visual material, art, or architecture which was one of the most important ways that the imperial identity was both represented and perceived and which has been the subject of much recent scholarly treatment. Visual materials, especially coin types, are heavily used in several essays, but the primary focus of the collection is on literary works, both contemporary and subsequent to the dynasty, with Suetonius (Seager), Tacitus (Vout, Bellemore, Rees), the Laus Pisonis (Rees), and the Octavia (Buckley) receiving attention. As a result of the collection's literary focus, it is also concentrates mostly on the upper-clases and Rome itself. A short collection such as this one is selective by definition, but one also misses an explicit treatment of an emperor's representation of himself and his position, for example, to a provincial town or a field army.

The essays contained in the collection are all insightful and interesting. Bellemore and Seager advance our understanding of the difficult concept of the domus Augusta under Tiberius, looking for how the makeup and hierarchy of the imperial house were constructed and communicated. Vout takes on the age-old question of Tiberius' dissimulatio by arguing that Tiberius had little choice but to follow the model of Augustus as princeps even though it did not fit him well and thus might appear to be disingenuous. Gibson's own contribution deals with how Claudius walked the line between military and senatorial acceptance. It is somewhat ironic that the last Julio-Claudian, Nero, is the subject of three essays in a volume on succession. Rees considers Tacitus' treatment of the Neronian conspirator Piso and Buckley looks at the Nero of the Octavia. Finally, Drinkwater argues that in Nero's failure we can still see the developing institution of the monarchy that would eventually sustain good and bad rulers.

Overall both the collection as a whole and the individual contributions are valuable for those interested in how the earliest emperors presented themselves. While it is hard to draw broad conclusions from a collection of essays, two general points that emerge are worth noting. First, as Gibson himself points out, the dynasty might rightly be styled Augustan rather than the Julio-Claudian. The essays return repeatedly to the fact that while each successor could construct a somewhat unique identity as a ruler, given the lack of formal models and rules, they were all always in dialog with, and judged by, the standard set by Augustus. Second, the understanding and perceptions of the dynasty and of individual emperors continued to change and develop over time, reflecting and incorporating later realities and ideas, rather than being static or fixed. Thus the "development of imperial concepts" from ruler to ruler is not always easy to define or trace using our later historical sources.