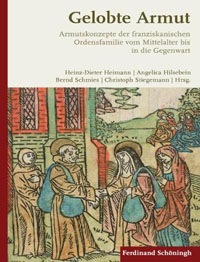 Despite several monographs and edited books already published on the subject, Franciscan poverty continues to remain an intriguing subject, and deservedly so, as it is a complex topic and so much of the medieval history of the Franciscan Order is centered around debates on poverty in discourse and practice. Gelobte Armut, literally the vowed poverty, is an impressive and illuminating contribution of twenty-nine scholars to the subject of Franciscan poverty. The articles published here were originally presented in a conference that took place in Paderborn on 17-19 February 2011 under the initiative of Heinz-Dieter Heimann, the professor of medieval history at the University of Potsdam, and with the cooperation of Franciscan Research Institute (Fachstelle Franziskanische Forschung) and the Archdiocesan Museum in Paderborn. As the subtitle also signals, the book does not concern itself only with the First Order, but it includes the Clarisse and the Capuchins; it deals with both the ideal and practice, as the original title of the conference indicated ("Armutskonzepte zwischen Ideal und Wirklichkeit"). Its time span covers the period starting from the foundation of the Franciscan Order up to the twentieth century. Both the coverage over a long time and the inclusion of the female branch of the Order and other Orders that were offshoot of the Franciscan movement makes the book a very laudable initiative as it gives the reader the opportunity to contemplate broader patterns of change in the understanding and practice of poverty that would otherwise not be possible.

Following a brief preface, the book opens up with an introduction written jointly by Heimann, Schmies and Hilsebein, where they raise a series of important questions, which set the tone for the rest of the book. In many ways, this is a very successful introduction that at once unites and makes sense of the diverse contributions collected in the volume. Among the questions raised here are such like who vowed to what kind of poverty, and to what extent do the claims of the mendicant asceticism prove to be culturally productive? The operative approach is to look at poverty's role within the Franciscan history from the lens of a comparative history of religious orders, based on the approach of the Forschungstelle für Vergleichende Ordensgeschichte directed by Gert Melville.

The rest of the book is divided into six sections, with each section featuring between two to seven articles. Due to space restrictions, it is unfortunately not feasible to comment on each of the twenty-seven articles contained in the book, so I select some to give the reader an idea of what each section tries to achieve. The first section provides the historical context by considering the role of poverty in the Middle Ages as a religious-sociological phenomenon. Out of the two scholars who contributed to this section, Otto Gerhard Oexle traces the attitude to poverty and the poor from the ancient societies to the nineteenth century and the poor in the medieval society. He argues that poverty needs to be studied from the cultural perspective including literature and art as sources, insisting rightly on its multidimensional character (economic, social and cultural). Werner Maleczek focuses on the voluntary poverty in the religious movements of the Middle Ages. A society's attitude to poverty is as much cultural as religious, and therefore these two contributions set the tone for the rest of the articles.

The articles in the second section explore the role and concept of poverty in the thirteenth century. In a well-argued piece, Leonhard Lehmann looks at the poverty of Francis and Clare of Assisi and emphasizes the role of material poverty as a gateway to spiritual poverty. He also provides a comparison of the key passages on poverty between the rules of the First and Second Order. Peter Schallenberg reminds us of the important contribution of the Franciscan theology and spirituality to the formation of the modern catholic social ethics. Volker Honemann's contribution is highly useful for those interested in a summary of modern literature on Franciscan poverty as he treats briefly the historiographical stands and then painstakingly looks into the treatment of poverty in the Franciscan hagiographies and chronicles of the thirteenth century, and works out the differences in these treatments.

The third section of the book deals with the subject of learning vis-à-vis the poverty ideal and Franciscan contribution to the history of European education. Andreas Sohn recounts the familiar story of the development of Franciscan educational network but offers a brand-new contribution by introducing a cycle of frescoes ("Doktorenfries") in the Franciscan church in Bozen, Südtirol that depicts the learned cardinals, popes and Franciscans, and roughly dating from 1491-1514 (172). It is good to see that Sohn also notes that the process of implementing a school system started before Bonaventure and the Narbonne constitutions of 1260. The discussion of the fresco-cycle is very interesting as it allows the reader to see which Franciscan learned figures the Order cherished by the 16th century. Almut Breitenbach tackles a less-trodden territory of learning and education in the convents of the Clarisse. Harald Wolter-von dem Knesebeck treats several manuscripts of Franciscan origin in Germany by looking at their illuminations and Buchkunst and reflects on Franciscan book production. Annette Kehnel's article explores the link between poverty and learning from a different perspective by looking at how Franciscan poverty became a subject of the discipline of economy.

The fourth section deals with perhaps the best-known aspect of the history of Franciscan poverty: the usus pauper controversy. Although as an idea the poor use had its intellectual origins in the writings of Hugh of Digne, it was catapulted to attention through the work of the Franciscan theologian Peter John Olivi, who saw it to be an organic part of the solemn Franciscan vow. The five papers in this section deal with the various aspects of the conflicts that arouse over the usus pauper. Among the articles presented here, Jürgen Miethke looks closely at the infamous conflict over poverty between the Franciscans led by Michele da Cesena and pope John XXII, though providing a substantial fore history and background. Miethke also reflects on the lasting effects of this conflict for the whole ecclesiology. Jens Röhrkasten looks at the poverty vis-à-vis other important Franciscan virtues of humility and obedience, and demonstrates how the later conceptualization of poverty left friars with a dilemma between obedience to the Gospels and obedience to the general minister.

The fifth section deals with the late medieval and early modern period and consists of seven articles. In a way, this section reads as an interpretation of the aftermath to the relentless rise of poverty as the key Franciscan creed, and expectedly the articles in this section concentrate more on the reformed Franciscan movements such as the Observants and Capuchins. Thus, the section opens up with Thomas Ertl's article on the place of poverty in the anti-mendicant literature of the 13th-15th centuries. Christoph Volkmar explores the challenges presented by the Church reform movement to the poverty ideal of the Franciscans by taking up the case of the Franciscan convent at Leipzig. Hillard von Thiessen and Rolan Pieper consider the poverty ideal of the Capuchins. In a very interesting article, Ute Ströbele looks into the material conditions of the tertiary female Franciscan convents at the time of the Enlightenment, and finds that they were engaged in financial enterprises, as well as being collectors of books for private ownership. She notes the change in the meaning of poverty from the Middle Ages, when it was positively willed, to the eighteenth century where it was considered a stigma.
In the sixth and last section, that treats the 19th and 20th centuries, the background changes once again drastically. It is a period of growing secularization, of utilitarian ideas that intensified and emphasized the active social and charitable role of the religious, and of expansion of capitalist consumer society. The first contribution in this section is by Relinda Meiwes, who explores the emergence and development of highly popular tertiary women's congregations, who undertook the care of sick and poor, operated as educators and social workers in general. In yet another excellent article, Gisela Fleckenstein investigates how the friars struggled to obey the prohibition concerning money when in the world of the post-industrial revolution their mobility and mission became increasingly dependent on the services paid by money, such as the train journeys. Lars Schulenburg offers an original closure to the volume by emphasizing the epistemological potential of the chronological mapping of Franciscan friaries and convents in a given geographical area.

2012 has been an exceptional year for Franciscan studies. Augustine Thompson's biography of Francis of Assisi, the English translation of André Vauchez's biography of Francis, Krijn Panster's Franciscan Virtue, the present under review, and my own monograph on the rise of learning in the Franciscan Order have all appeared in the same year. The downside of this is that the authors of these studies did not have the chance of benefitting from each other's work during the writing process. Nevertheless the publication of all these contributions point out to the continuing liveliness of the field of Franciscan studies. Reading Gelobte Armut, I enjoyed very much looking at Franciscan poverty in a long stretch of time rather than in its customary medieval boundaries, and from a diversity of angles such as theology, art, economy and architecture. What is left to be desired in this volume is what the multi-authored volumes tend to lack in general. A subject index rather than just a person-and-place index would be very useful, and would allow the reader to trace the change of concepts and practices in time. There is no conclusion that draws out or reiterates the collective implications of the pieces presented, situates the Gelobte Armut in the larger field of European religious history, and points out to the areas of future research. Still, the volume is an amazing achievement in itself, and the scholarly quality of the contributions is very high, as authors are well-versed both in contemporary sources and in the historiography. Both the editors and the contributors are warmly to be congratulated for the result.