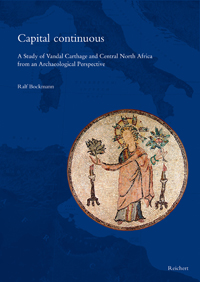 In recent years the Vandals, as barbarian people and especially their kingdom in North Africa, has attracted a good deal of scholarly interest as it is shown by the recent several monographs and a good number of scientific papers concerning their time and deeds. Ralph Bockmann offers a particular insight of the Vandal kingdom through mainly archaeological research but not neglecting a more classical historiographical approach.

The work is divided into two main parts even though there are four chapters. That is, the first chapter analyses the Vandal capital of Carthage and, as the very title implies, this part supposes almost half of the monograph. The remaining three chapters' concern is the Vandal reach over other areas controlled by the Vandal kings in African soil through the study of several selected settlements.

The approach is fundamentally based on the analysis of the secondary bibliography and especially on the archaeological sources. Concerning historiography Bockmann is deeply indebted by Philipp von Rummel profuse works and Andrew Merrills and Richard Miles' recent monograph, and less on a straight analysis of the ancient sources. In fact, sometimes Bockmann trusts exceedingly on the ancient sources even if these have been deeply criticised, as Christian Courtois did regarding Victor de Vita. [1]

The first section of Bockmann's book is an introductive chapter focused on two main topics. First of all, a quick review of the inmediate Vandal history prior to the establishment of their African kingdom and secondly a discussion concerning the research on Vandal Africa, plus some pages dedicated to present his work. It would have been particularly interesting to have extended more pages on the Vandal stay in Hispania, as these years can be considered formative to their further movements and the establishment of their kingdom. [2] Concerning this, the analysis on Vandal migration on Africa is purely based on an economic stand but although Bockmann supports Javier Arce's incomprehension on Vandal motives of going to Africa because Hispania was rich enough. Apart from the economy, the Vandal insecure settlement on the Iberian Peninsula was a key point. On the other hand, he is convincingly enough when he deals with the state of the Roman army on northern Africa on the eve of the Vandal arrival and the later military role adopted by the newcomers after the several treaties firmed with Rome. Likewise, the duality the author sets out about governance and government is a crucial one to understand his approach to the Vandal kingdom.

The next chapter, "The kings and the city - Carthage, royal capital", is definitively the core of Bockmann's work. His analysis on the interaction and hybridization between conquerors and conquered is a brilliant one. He considered that the use of former Punic iconography in Vandal numismatics meant an ideological and historical connection with the city of Carthage [3] as the heart of the Vandal kingdom and he emphasizes the role played by the new elites on the city, especially concerning the evergetism and the deep influence of the Roman background on the rising of a new society - fundamentally - concerning the interaction between the provincial and the Vandal elites in spite of religious differences that Bockmann solves appealing to the interesting concept of "rough tolerance". Similarly, his pages on the several royal courts in Carthage are bright. In consequence, Bockmann is deeply right when he determines that Carthage was the economical, political and ideological centre of the Vandal kingdom as it became a court - with all the features implied by this fact - and the continuity of most of the former Roman structures, the otium and the literacy. On the other hand, concerning Vandal arrianism and combativeness against Nicene cult, although he accepts the validity of Giusto Traina and Wolfgang Liebeschuetz approaches, Bockmann says that Vandals estimated that their rule was approved by God himself - just as it happened under the very Roman Empire. However, his discussion about Vandal ethnicity is a bit rigid in some occasions as the Vandal case is a perfect example of the liquidness of this process in Late Antiquity, completely historical since the beginning of their migration till the establishment of the kingdom in spite of the problem of not keeping today a Vandal history as other barbarian peoples have left. Likewise, the division of the ruling class between progothic and probyzantine kings (38) is questionable as it seems that Vandals were a lesser player on the post-Roman world in comparison with Ostrogoths. [4]

The chapter three, "Reaching beyond Carthage" deals with the Vandal settlement outside Carthage and the troubling matter of the sortes vandalorum. On this point, Bockmann is deeply influenced by Walter Goffart and Jean Durliat theories and also by Andrew Merrills, who estimated that the Vandals were an army on the move and not a migrating people. However, there are many difficulties on this approach as Wolfang Liebeschuetz, Evangelos Chrysos and Yves Modéran have shown brilliantly and the very sources attest. [5] It's very difficult to consider that all 80.000 Vandals became idle possessors although Vandal elites certainly did. On this chapter also deals with the concept of Vandal identity through a bit inflexible list of features that a priori might leave aside Vandal women and most of male Vandals themselves but elites (147). The rest of the chapter deals with a selected array of Proconsular sites where can be observed the presence of the Vandals as Thuburbo Maius or Uppenna through archaeology. The final chapter, "The outer range. Southern Proconsularis and over the borders", keeps on this same line and offer worthy insights about the agricultural organisation and production and the preservation of the provincial cult during Vandal period. As in the previous chapter, Bockmann analyses in depth several key sites as Hipona, Madauros, Tebassa, the Kasserine Valley etc., and he incorporates the archaeological data into the bigger portrait of the Vandal kingdom.

As a conclusion, Bockmann's work is a worthy one concerning several topics as the importance of Carthage from every possible point of view, the hybridation between Romano-African and Vandal elites, the survey of archaeological remains dated during Vandal time and several other themes. On the other hand, there are certain approaches that are polemic or are subject to scholarly debate. However, discuss is historiography. Finally, there are some rude historical mistakes that the author should revise if he has the chance of producing a second edition of this book. Mistakes as saying that Valentinian III was the younger brother of Honorius (9) or that Guntheric was Gaiseric's father when both were sons of the Vandal king Godegisel (118). On the other hand, it's a pity than the author didn't employ more images in such a monograph where archaeology is such a fundamental tool and there are so many sites reviewed.