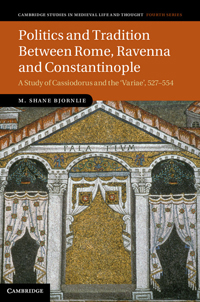 There was a time when historians used to read the Variae as if they were the complete documentary record of the Ostrogothic chancery in Ravenna during the years in which Cassiodorus held office at court. Over the last decades their interpretation has become much more sophisticated: As Christina Kakridi [1] and others have shown, the letters that make up the collection entitled Variae need to be interpreted within the social context and literary conventions of letter writing. The collection is an artful composition created by deliberate selection and careful arrangement. The peculiar style of the Variae serves specific aesthetic aims ("mannerism"), their content conveys aristocratic ideals of conduct. At the same time, the collection as a whole serves as an apologia for the author and the social and political order in which he had himself been actively involved. At present, no one would deny that the Variae comprise two layers of meaning: one that is determined by every single letter's intent at the time of writing and another that was added to it when the letters were inserted into the collection.

The book under review goes far beyond this new consensus. Like his predecessors, Bjornlie argues that the Variae are "an apologetic work intended to counter the notion that the former palatine elite served a 'barbarian' regime." Bjornlie, however, reads the Variae as if they were a political pamphlet: according to him, "the collection aimed to demonstrate their suitability to return to a role in the government in Ravenna" (5). He suggests that the Variae were compiled much later than commonly assumed - not in 537/8, but sometime in the 540s - and intended to reach an audience composed of eastern "bureaucrats" opposed to the autocratic regime of the emperor Justinian. How exactly this intended audience would have been able to bring Cassiodorus and his circle back into power is not, however, explained. Even more striking is the assertion that in composing the Variae Cassiodorus did much more than select letters that he thought would reflect well on him and on the regime he had served for so long and arrange them into twelve books. According to Bjornlie, Cassiodorus substantially altered the content of many letters of which he had kept copies by adding digressions to convey a philosophical-political message that was not carried by their original wording. In addition, a considerable number, including all the formulae in books 6 and 7, was actually composed long after the end of his political career for the purpose of being included in the Variae. To put Bjornlie's view bluntly: far from being authentic documents of the Ostrogothic chancery, many of the texts assembled in the Variae bear only superficial resemblance to the original documents and several are outright forgeries. This is a bold claim to make. If true, it would pull the carpet out from under much of what has hitherto been written on Ostrogothic rule in Italy.

Frustratingly, the reader has to read more than 150 pages before (s)he comes across anything resembling a justification of this position. The first five chapters are devoted to:

1) The date and context of the Variae which, according to Bjornlie, were not necessarily written before 540, possibly in Constantinople, and in any case during a period of "extreme political uncertainty" (32),

2) The "imperial bureaucracy" in the eastern empire that was "an enclave for traditionalism and classical learning" (50), an "intellectual elite" steeped in Neoplatonism and possessed of a corporate spirit, "regarded as the guardian of a legitimating tradition that could potentially curb (particularly in the field of law) the prerogative of the emperor" (59),

3) The policies of Justinian, who "from the outset of his reign [...] was determined to contest the institutional independence of the bureaucracy" (62),

4) "voices of dissent in Constantinople" whose impact is deduced not only from the obvious candidates Zosimus, Procopius and John the Lydian, but also from a series of authors that, according to Bjornlie, responded to a pervasive polemical discourse by reproducing imperial propaganda,

5) The political role of the Anicii between Rome, Ravenna and Constantinople. In this chapter, Bjornlie argues that the Anicii "as a whole, dominated the political scene of Rome" (134) since the mid-fifth century, were closely allied with the eastern court and as such were treated with mistrust by Theoderic - which is why Boethius and Symmachus were executed - and received with exceptional favours by Justinian after their flight from Italy. In their hands, the fall of Boethius became an ideological weapon against those members of the senatorial order who - like Cassiodorus - had made common cause with the Amals. Mobbed by his Anician peers, the argument continues, Cassiodorus had no choice but to align himself with the eastern opposition to Justinian.

A short review is not the place to discuss the bewildering range of topics that are touched upon in these chapters. It should not, however, go unnoticed that the concept of a divide between the Anicii as members of the senatorial aristocracy and Cassiodorus as the representative of a "palatine bureaucracy" is founded on dubious assumptions about the social character of the senatorial order and the family background of Cassiodorus - who proudly traced his lineage to a senatorial great-grandfather and in the prime of life held no office at court for twelve years (511-523) - and on the long-discarded notion that aristocratic families were political groupings acting on a common agenda. On top of that, the idea that the Anicii were the most powerful family among the Western aristocracy has no foundation either. [2]

In Chapter 6 and 7 we finally get to the heart of the matter. Lack of space again prohibits a detailed discussion, but a few examples have to suffice in giving an impression of the kind of reasoning that leads Bjornlie to the conclusion that the Variae as we read them are largely a piece of historical fiction:

1) In Variae 1.4 Cassiodorus writing under the name of Theoderic recounts that long ago his own grandfather went on an embassy to Attila together with Carpilio, the son of Aëtius, and by his steadfast attitude restored peace to the empire. Bjornlie combines this with an entry in Marcellinus Comes' Chronicle, repeated in Cassiodorus' own Chronicle, saying that Aëtius perished together with a friend named Boethius, and concludes from the comparison that Variae 1.4 implies that the philosopher's execution was not due to a tyrannical regime. He then declares it "evident" that the letter is interpolated because the glorious accomplishments of Cassiodorus' grandfather are not mentioned in his Chronica.

2) The Variae include several letters addressed to Boethius that contain long digressions and style their addressee patricius. Bjornlie cannot believe that Boethius could have held this title before he took on an office at court; ergo they must be forgeries. This is hardly compelling since we know of several cases in which scions of prominent senatorial families were granted exceptional honours before holding office at court - the most spectacular of these being the joint consulship of Boethius' own sons in 522. The second argument he adduces hardly holds water any better than the first. Bjornlie alleges that the diplomatic correspondence of Theoderic cannot possibly be authentic because it was written before Cassiodorus assumed the office of quaestor. Quite true, but then he acted as consiliarius of the praetorian prefect precisely when these letters were drafted and may well have been commissioned to compose letters of special importance - as he was later when serving as magister officiorum (Variae 9.4.6).

3) The formulae in books 6 and 7 must be forgeries because they have no direct antecedent in the documentary or literary tradition and because they mandate ethical standards of behaviour, but give little information as to the practical duties imposed on the people invested with a particular office. Letters of appointment, however, are something quite different from a job description.

In Chapters 8-11 Bjornlie tries to demonstrate that the Variae are based on philosophical concepts that are not, as had hitherto been believed, common property of the educated elite in both the East and West but are rather to be understood as a pointed response to the reforming ideology and autocratic pretensions of the emperor Justinian. These concepts were tradition (antiquitas) and nature (natura): "Cassiodorus intended the Variae to demonstrate that Italy as a political system contained the same varietas as the natural world and that the traditional system of justice exercised in Italy was consonant with a ius naturae that found harmony in varietas, not discord. In essence, the Variae claim that the Amal regime had a correct understanding of nature which allowed the exercise of justice that was consonant with ('true') universal principles" (268).

Unobjectionable as these statements may seem, they do raise acute problems of interpretation: is there really any need to explain the traditionalism of the Variae in terms of a hidden polemic against Justinian? Was not the compromise between Gothic kings and Roman senators based precisely on an ideology that alleged continuity with the Roman past? Here, as throughout the book, Bjornlie does not even consider the meaning that a particular letter or a specific discourse embodied in the whole collection might have had at the time when the letters were written and sent. Furthermore, it should be pointed out that by his indiscriminate use of the word natura / nature Bjornlie blurs the distinction between "physical universe" and "essence" that was fundamental to Platonist thought. This is only one of the reasons why his assertion that Cassiodorus inserted digressions on natural phenomena in order to demonstrate that the Amals ruled "according to nature" is subject to doubt. The suggestion that digressions on gout or the bronze elephants on the Via Sacra in Rome were intended to show that king Theodahad failed to understand the metaphysical foundations and moral imperatives of good governance is hardly more persuasive.

It is not easy to do justice to a book like this. Enormously learned and bent on challenging received opinions, it might stimulate further thinking on the two layers of meaning contained in the Variae. Acute observations are scattered all over the book, but they are all too often buried beneath trendy jargon and irrelevant digressions. Ill-structured, repetitive and long-winded, the book demands stamina in order to make it from cover to cover. One is tempted to say that the book is not altogether unlike the object it aims to analyse. Cassiodorus, however, would have been appalled to find Cicero's Tusculanae Disputationes cited as Disputationem Tusculanarium (259) and hard put to recognize his own thoughts in some of Bjornlie's translations (e.g. 273f.).