Andrzej Wypustek: Images of Eternal Beauty in Funerary Verse Inscriptions of the Hellenistic and Greco-Roman Periods 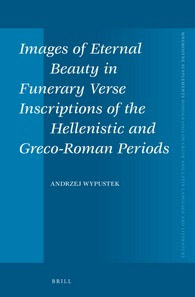 This book investigates depictions of eternal beauty in funerary verse inscriptions and the possible correlation between references to immortality and eschatological beliefs.

In the "Introduction" Wypustek explains his choice of inscriptional verse epitaphs as a particularly valuable source for diverse aspects of ancient history since they give access to the voices of people ignored in other sources. Epigrams of the Hellenistic and Greco-Roman period, unlike earlier ones, Wypustek claims, were more "interested in the individual, in their biographies and the everyday aspect of their lives" (3), and thus one can discern particular views amidst the lofty poetic discourse. Wypustek, however, is not concerned with the texts that overtly express beliefs associated with certain mystery cults; these texts are few and well studied. His objective is "to examine those epigrams which while presenting some kind of a positive eschatology provide us with reasonably concrete information on the posthumous status of the deceased with regards to the gods but do not reflect the specific doctrines of any specific group of believers" (3).

Chapter One, "Eschatological Themes in Epitaphs," begins by setting the stage, namely by pointing out the coexistence of two apparently contradictory concepts regarding the dead: a "traditional pessimistic concept of the dead descending into the underworld," an idea that predominated, and the "occasionally expressed belief that people endowed with special virtues enjoyed an afterlife of eternal happiness" (6), which Wypustek calls "optimistic eschatology." Although Wypustek shares the reservations of some scholars to admit verse epitaphs, apart from a few individualistic ones, as expressions of personal views, he argues that some formulaic epitaphs should be considered in the study of eschatological allusions. Of particular value is the category of "consciously formulaic" epitaphs. More numerous than individualistic, they are defined as "deliberately unoriginal types of epigrams, which make the use of familiar (mostly mythological) motifs and conventions of funerary poetry and/or Classical literature, while, at the same time, allowing for the marked differences in attitudes and opinions of beliefs" (28).

Chapter Two, "The Dead as Gods," discusses private poetic deification as a means of idealizing the dead as eternally young and beautiful. Wypustek investigates the epitaphic theme of the return to ether, in which the souls are said to go to the substance that fills the starry heavens and enjoy a happy existence there. Although the employment of such a motif, he argues, did not indicate that either the deceased or the commissioner of the epitaph held a doctrine or belonged to a mystery cult, it could reflect "a sort of metaphysical hope" (48). Wypustek then relates the concept of souls returning to the ether to the notion of "astral immortality," or catasterism, and analyzes the spread and popular appeal of such forms of indirect apotheosis, as well as possible influences on it of Imperial ideology.

In Chapter Three, "The Dead as Heroes," Wypustek considers the religious connotations of the term 'hero' as applied to the deceased in verse epitaphs and its possible implication for a belief in the after-life. Tracing the democratization of the term, he argues that calling the deceased a hero could be "an expression of a feeling that the life of the deceased was such a blessing for their closest family" (78), while also a way to emphasize the prestige of the deceased. He notes that heroization concerned mostly children, adolescents, and young adults, for whom, he suggests, the heroic status was seen as compensation for what they missed out on in life.

Chapter Four, "Marriages with Gods" is an exploration of wedding imagery in funerary epigrams. According to Wypustek, its meaning was neither mystic nor eschatological. Rather, the idea of divine abduction conveyed the message of the exceptional beauty of the mortal. Among many examples, pride of place is given to the epitaph of Theophile found in Panticapaeum, Kerch, in the Crimea (104-112). The epitaph consists of four epigrams, all evoking wedding imagery, the last of which strikingly contrasts Pluto and Hades: having become the bride of the former Theophile has escaped the latter. Although some scholars find here manifestation of Orphic beliefs, Wypustek is inclined to think that while the poet "drew on ideas used in mystery cults," he "need not have been a cult member himself, and neither did the deceased Theophile" (112). The abduction of the deceased by a deity was "first and foremost intended to proclaim the sensual and erotic beauty of the deceased" (121).

Chapter Five, "The Deceased as the Chosen Ones and the Lovers of Deities," is an exegesis based on inscriptional material of the sententia attributed to Menander claiming that those whom the gods love die young. Wypustek exemplifies the theme of divine lust for the deceased by the imagery of Ganymede in funerary art and epitaphs. Similar to it is the motif of death by lightening, also a variation on the abduction by Zeus, and both reflect hope of salvation: "Here the chosen ones faced a prospect of happiness in the afterlife thanks to a deity experiencing a passionate onrush of affection" (155).

Chapter Seven, "Overview and Conclusions" reviews the thesis that funerary epigrams use mythology without implication of any particular myth or systematic doctrine. The purpose of an epigram was "to give poetic expression to metaphysical hope" (182), while the choice of the myth was correlated to the particular circumstances, e.g. for a young boy the Ganymede myth would suit, whereas in the case of a young a woman, the abduction of Persephone would be evoked. Direct and indirect assertion of the beauty of the deceased was both polyfunctional and polysemantic, conditioned not so much by eschatology, as by the "human conviction that what was beautiful, dear and loved could not cease to exist and could not fall into oblivion" (199).

Wypustek's book is provocative and stimulating, and raises further questions, such as why verse was chosen for an epitaph. Is inherent in that very choice also a quest for beauty? And are there "things," that is, words, expressions, or concepts that occur only in verse? This is an important issue to consider because, in the Imperial period, Greek (and, even more, Latin) non-metrical epitaphs can be long and informative and they also of course can praise the deceased. Furthermore, there are so-called semi-metrical epitaphs, i.e. those that are neither accomplished verse, nor prose texts, but non-metrical texts with occasional metrical sequences and expressions characteristic of poetry. It would be interesting to explore how the content of these texts correlates to the form in which they are expressed.

The selection of epigrams, many of which not commonly known, is fascinating and a source of pleasure to the reader. The presentation of the inscriptional text, however, could be more accurate. In particular, I miss indication of which edition is followed: editions are listed in a footnote in chronological order, but whose text is quoted and why is never explained; nor is the meaning of textual signs given, and the angular brackets are used for at least two distinct purposes (both for correction of what the stone has and for the letters no longer visible). It is not stated when an inscription is quoted partially, nor when an epitaph consists of several epigrams, a fact often indicated visually on the stone. Some smaller infelicities are puzzling, such as calling Εὐτύχης Eutychos, with a note "or Eutyches" (52); where the spelling in -os comes from is unclear, but it is the one that persists. Occasionally, the length of a vowel is marked; for example, the length of iota in τιμή is indicated in the "Index of notable Greek terms." The choice of the entries - seven all together - in this Index is also baffling.

Lack of accuracy is unfortunately ubiquitous. Typos abound, with some causing genuine confusion. Thus, on multiple occasions the date given as BC should be AD and vice verse, and while "2nd-3rd century BC" (129) is an easy typo to detect, "4th century AD" for "4th century BC" (119) is not so obvious.

Yet most disappointing is the English. At times, the misuse of words is obvious, as in "Book 7 of the Greek Anthology, which includes epigrams" (100), which simply means "Book 7 [...] which contains epitaphs." But sometimes one may feel close to giving up, as when faced with a sentence like "This poem, which is expertly written but unmistakably expressing genuine belief in salvation after death, inadvertently mentions the sufferings of the deceased only in the first verses, which concern the fate of his body" (132). Adverbs and participial constructions are the source of particular grief. With better editorial care and the eye of a responsible proofreader it could have been a much better book.