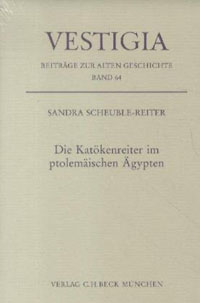 The book is the revised version of the author's doctoral thesis on the "cavalrymen settled on the land", presented in 2010/2011 at the Ludwig-Maximilians-Universität of München. Examining the Greek and Demotic sources, the author gathers a corpus of ca. 1300 persons, identified mainly thanks to their denomination, their belonging to an hipparchy, and kleros surface (70 to 100 arouras).

This study takes place at the intersection of Ptolemaic elites and army history. The publications of J. Lesquier [1] and Fr. Uebel [2] has long been the main studies on the topic, renewed later by J. Bingen [3] and E. Van 't Dack [4]. But documents have come to light recently [5] and new approaches on the army [6], Greek settlements and their administration [7] have been published. Therefore the present publication is no surprise.

The book is divided into 8 chapters. The first one is an introduction, presenting a state of the question, the study aims and geographical scope.

Chapter 2 is a general and classic introduction to the organisation of the Ptolemaic army, and to the institution of the cleruchy, depicting well the spread of foreign groups in Egypt, as separated (and relatively closed) communities. Strengthening the revision suggested by others, the author points the effective katoikoi presence in the chora, notably when considering the many cleruchs acting as local officers and the spread of village gymnasia (see now M.C.D. Paganini, "The invention of the gymnasiarch in rural Ptolemaic Egypt", in: Actes du 26e congrès international de papyrology, Genève, 2013, 591-597).

Chapter 3 is a careful examination of primary sources on the Ptolemaic cavalry. The author first deals with the organisation of the cavalrymen into ten (max) numbered hipparchies (100 and 80-arouras owners) and six ethnical hipparchies (70 arouras cleruchs), the later included in the first during the second century in an effort to harmonize the system as shown by Fischer-Bovet 2008, 117. She also examines two honorific titles and six entities regrouping katoikoi, and ends with a study of the cavalrymen equipment. In this chapter, an estimation of the number of katoikoi is sadly lacking, while Chr. Fischer-Bovet ("Counting the Greeks in Egypt. Immigration in the first century of Ptolemaic rule", in: Demography and the Graeco-Roman World: New Insight, Cambridge, 2011, 135-154) has recently shown how much the figures should be re-calculated.

Chapter 4, on the katoikoi ethnical composition, begins with diagrams highlighting the overrepresentation of Macedonians and Thracians, followed by Cyreneans, but also the diversity of recruitment. An interesting development deals with onomastics, examining theophoric and "military" names (more than 40% of the attested names), dynastic, Thracian and Egyptian anthroponyms (mostly in Middle and Upper Egypt). However, double and mixed names are well known in military context, and Egyptian names are probably under-represented in the corpus. More statistics on that topic would have been useful (in particular an accurate accounting of Egyptian names attested in the corpus and a more precise date for the emergence of Egyptian names).

Chapter 5, on kleroi, discusses first their evolution to "private" properties, examining the cleruchs' wills (published in P.Petrie I2), the "cession" procedure and the women rights on the kleroi. Then the author explores the ways in which the State could recover the kleros, by confiscation, division or temporary seizing. She concludes that the cleruchic land remains the property of the King and keeps its military nature, but the system flexibility shows the royal pragmatism to ensure loyalty of his soldiers and their families. The second important section in this chapter examines meticulously the officers responsible of the cleruchic land (distribution, auction, cession, etc.), and the central bureau of each nome in charge of the land registration (hippikon logisterion).

Chapter 6, on economical conditions of the katoikoi, opens with a section on duties paid by them, considering whether a non-mobilized soldier is still reckoned as such, with taxation consequences. The second part is devoted to livestock farming. But the main activity of the cleruchs is agriculture and to illustrate their relative weight in the cultivated lands, the author refers to Arsinoites, Herakleopolites and Apollonopolites land surveys (the same documents are studied in A. Monson, From the Ptolemies to the Romans, 2012, part II, which is a good complement to this chapter). The chapter ends with loans granted to cleruchs, showing the way the state tried to help them to cultivate their land. She concludes that katoikoi belong economically to the higher social strata, but they probably lost a part of their status while facing a decrease in their kleroi surface from the second century onwards (she may suggest, however, a less dramatic loss of economical power than Fischer-Bovet 2008, 200-205, taking account of all the cleruchs).

Chapter 7, about cultural and religious contexts, lists all the dedicatory inscriptions of the katoikoi. Unsurprisingly, consecrations are mainly made to the kings, which is typical of the military milieu. They outnumber by far inscriptions to Greek gods (only one), and foreign gods, mainly Atargatis and Heron (see now V. Rondot: Derniers visages des dieux d'Egypte, Paris 2013, who proposes an Arab origin for that god). On the contrary, Egyptian gods meet with a great success, in particular Pnepheros and Psosnaus in the Fayum. The last section, on the Gymnasia (which cannot be called "official place" (311) since they were private institutions), shows the implication of katoikoi in their functioning and their importance in their daily life.

The book ends with seven appendices, including a list of toponyms where katoikoi hippeis are attested (references to the sources would have been useful) and papyri corrections proposed in the book. The bibliography is up-to-date and followed by indices (noteworthy an useful index of persons containing references to PP or the sources mentioning them).

In conclusion, the book is clearly written, comprehensive and thorough. Besides, a great importance is given to primary sources (mainly Greek papyri) examination - which do not always lead to definite conclusions, but have the advantage to take on all aspects - and numerous texts are fully or partly quoted and translated. Thus, its reading is highly recommended to papyrologists and more generally historians interested in Ptolemaic army and Greek settlements in Egypt. In parallel, one may suggest the reading of the forthcoming book of Fischer-Bovet, with a more historical and wide overview of the same topic.

The only critic I could make concerns the study's boundaries. Often, conclusions or demonstrations go beyond the katoikoi group stricto sensu and one would have expected to learn if they encountered specific situations or if the trends underlined could be generalised to larger groups, such as the army, the cleruchs (ie cavalrymen and infantrymen, including the new cleruchs of the second century) or the "Greek sector" defined by Clarysse and Thompson. But it would have led to a larger study, which cannot have been done with the same quality of analysis achieved by this book.