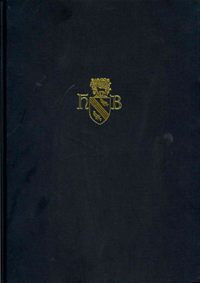 This work traces the saints venerated in all the monastic houses of England up to the Reformation through their mention in existing litanies. Volume one has the litanies of the houses A-P (Abbotsbury to Peterborough) and volume two, due in November 2013, will complete the series with Pontefract - York. Other volumes published by this Society, founded to record all medieval liturgical material that survives, deal with saints before 1100 and those in calendars. Thus, with the appearance of volume two scholars will have the equipment to know the saints venerated in medieval England.

This book begins with Prefaces by the Publications Secretary of the Society and the Editor setting out the background of the book and where it fits in to the total picture of liturgical research. Then follows a list of the 112 manuscripts used in the two volumes, then detailed notes on the 60 in this one. Then the complete texts of 60 litanies are transcribed, apportioned to 24 monasteries: 19 Benedictine, two Cluniac, two Cistercian, and one Carthusian. Then follows a 24 page bibliography concluding with an alphabetical index of the locations of all 112 manuscripts. The interdependence of the two volumes is thus obvious.

The importance of the commemoration of saints in calendars and litanies is that they are frequent aids to dating the manuscript concerned, thus assisting the interpretation of all the other contents of the manuscript in which they occur. That is the usefulness of this book to those interested in other aspects of medieval life than monastic litanies. But they have a general interest in themselves. An examination of those in this book shows their basic structure as: invocation first of the Trinity, then of Mary, then Archangels, spirits, John the Baptist (as the last and greatest of the prophets), then the Twelve Apostles (using either the Markan or the Lukan lists) followed by the martyrs, universal and local, then confessors, monks and hermits, liturgical virgins and all saints to conclude the list. Then follows the deprecations beginning with A/Ab (petitions for protection from dangers) of which there are usually twelve or 13; then the Per invocations (calling on the various aspects of Christ's life) of which there are usually seven; then the Ut petitions (that various boons would be granted) of which there are about 20. The litanies all conclude with the Agnus Dei and Kyrie Eleison.

Professor Nigel Morgan is one of the foremost medieval liturgical scholars in England, (a Festschrift was issued for him in 2010 [1]) and he has done extraordinary work in going through manuscripts with an English origin wherever located, some in small local museums, searching for the "standard" litanies, that is, those sung in procession on Sundays and other special days before mass and vespers. His erudition is particularly seen in this book in the notes on the manuscripts, where he analyses the manuscript, setting its litany in the context of the total contents, pointing out its interesting features and showing why it belongs to a particular monastic house. As the interest of these litanies for most scholars lies in the rare or even obscure saints, such as Corentin, Iltui, Forannan and Severn, these are pointed out for each manuscript and much more detailed accounts of them are promised in a third volume, which has been found necessary because of the wealth of material.

Although this first volume stands on its own for the monasteries it contains, it really requires the second and third before it is a complete work. It is not as it stands a description of the place and usage of litanies in the medieval church, although something of this may come in the third volume. It is best seen as part of an on-going process to make available in a usable form the total corpus of English medieval liturgical material. This after all is the purpose of the Society which has published it. The immense task of searching out these litanies and apportioning them to the monastic house they come from requires an overall knowledge of the medieval scene and Professor Morgan is the obvious person for this and the scholarly world owes him an immense debt.