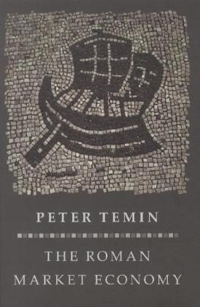 Ancient economic history is remarkably free from economics. One of its dominant traditions, that of Weber, Polanyi and Finley, rejects modern economic theory as inapplicable to any pre-modern society, especially classical antiquity; the other, that of Rostovtzeff, presents an optimistic view of ancient developments and describes them using modern terminology, but remains resolutely untheoretical. The recent popularity of New Institutional Economics has enabled conventional ideas to be presented in more contemporary terms, rather than bringing about any revolution in understanding, while occasional attempts by economists to offer accounts of antiquity are readily dismissed on the grounds of their limited understanding of evidence and context. Peter Temin's book is thus long overdue, and potentially important for the entire discipline; his knowledge of the Roman Empire and the relevant scholarship, even as a self-confessed amateur, is sufficient to command the respect of specialists, but his interpretation of the Roman Empire is based on many decades of distinguished research in the field of modern economic history, and a firm grasp of classical economic theory and social-scientific methods. His book aims above all to show ancient economic historians what they have been missing by cutting themselves off, consciously or otherwise, from the mainstream of economic history.

The Roman Market Economy does not attempt to offer a complete account of its subject, but rather a series of case studies, some of which will be familiar from Temin's previous work in this field. After a wonderfully lucid exposition of the basic principles of economic model-building, the first part studies evidence for prices and price movements in Rome and Hellenistic Babylon (a much better source of data), to establish the existence of an integrated market system that covered the empire as a whole; the second considers 'microeconomics', the operations of the markets for grain, labour, land and money; the third focuses on 'macroeconomics', exploring questions of economic growth, performance and productivity in a pre-modern economy ruled by Malthusian constraints. Temin's conclusion is that the Roman Empire at its height was significantly more complex and powerful in economic terms than the primitivist tradition would allow, and that some regions were in their economic development fully comparable with the most successful states of the early modern period.

The obvious objection to many of these arguments is that the evidence is simply inadequate to support or test them properly, however plausible they might appear; no amount of regression analysis is going to convince many ancient historians that six pieces of data, taken from a period of more than two centuries, are sufficient to demonstrate the integration of the entire Roman wheat market. It does not help that Temin has to rely on data collected by other historians, some of which he rejects on the grounds that it is atypical and some of which he retains despite the original source considering it to be atypical - this looks a little too much like cherry-picking, and certainly does not amount to the 'random sample' that he claims. However, such evidentiary problems are unavoidable in any discussion of the ancient economy - they are simply more obvious in this kind of analysis - and, even if some of the conclusions drawn by Temin are debateable, the use of these kinds of statistical methods is the only way we will get anything useful out of the surviving information. It is a shame, then, that he does not develop these studies in more depth, and that the central part of the book moves away from model-building and the explicit testing of hypotheses to offer a discursive account of some Roman economic institutions; there are many interesting points to ponder here, particularly when he draws on comparative evidence from other periods, but both the approach and the conclusions are more conventional.

A more significant methodological issue with Temin's account is his tendency to adopt unrealistically sharp distinctions and polarities. Sometimes this is done consciously and explicitly in order to construct a model, as in his account of Roman inflation. Often, however, it seems to be unconscious, or at any rate is not signalled to the reader as a simplifying assumption. Thus all exchanges are categorised as representing either instrumental, customary or command behaviour, depending on whether or not they involve prices and money, which apparently precludes the possibility of multiple meanings or the influence of social and cultural factors in market exchange. Rome in this analysis either is or isn't a market economy; unless all markets were completely independent of one another, it should, he claims, be considered the latter. Few if any ancient historians would argue today that there was no connection at all between at least some markets (certainly the major areas supplying Rome with grain), so Temin is here pushing at an open door - unless, as often happens with this choice of terminology, 'the Roman market economy' thus defined then tends to be understood in a far stronger sense as a fully integrated modern economy where the logic of the market shapes all aspects of social life. The risk is that the most important questions are missed: not whether or not some markets in the Mediterranean were linked, but how far different regions were integrated and interdependent, and what the most significant factors in price formation may have been.

Temin's conclusions about the Roman Empire are on the whole less radical and modernising than they can appear at first. Indeed, in some cases they offer a new take on some well-established 'primitivist' positions; for example, his analysis of wage levels in different regions of the empire suggests that Italy was characterised by very high levels of inequality, as the spoils of empire were anything but evenly distributed, in contrast to the optimistic claims of some other historians for significant general improvements in personal well-being and mass consumption as an automatic result of economic growth. What is most innovative and exciting here is the methodology; even if we are offered only a limited selection of some of the most basic elements of economic theory, this clearly demonstrates its potential for illuminating the Roman economy. There is of course a risk that some ancient historians will simply look at the conclusions rather than the argument, and it does not help that some of the explanations - for example, of regression analysis - are too brief to amount to more than 'trust me on this' to anyone without some background in statistics; the argument elsewhere would benefit from more section headings to make the steps more explicit. However, this important book should be a challenge to ancient economic historians of all persuasions to engage seriously with both economic theory and comparative history, as well as with its specific claims about the development and performance of the Roman Empire.