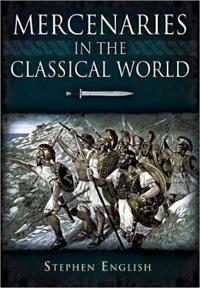 Ancient Greek warfare, in its most popular and famous form, has been centred on the concepts of disciplined phalanxes and citizen armies. The ideal Greek army consisted of land-holding citizen-soldiers, many of whom were amateurs, who provided their own military equipment and defended their states (poleis) and their farms from any invaders. Their military duties were therefore fundamentally related to their status as citizens and their political rights - a fact which stood at the basis of the egalitarian political systems of the Classical Greek world. This ideal, however, was challenged by the emergence of mercenaries who came to dominate the Greek and Mediterranean battlefields from the late Classical period onwards. Mercenaries, being a professional and standing military, foreign to the communities for which they fought, redefined the links between the citizen and the soldier. Their growing significance in Greek warfare, as Matthew Trundle claimed, "was a political, social and economic phenomenon that was central to Classical Greek history". [1] Considering all this, it is surprising that the more general studies on Greek mercenaries have been limited to the works of H. W. Parke (1933) and the more recent Trundle (2004). [2] A re-examination, as Stephen English writes in his latest book, was somewhat overdue.

The first two sections of the book tackle the question of the definition of a mercenary, and the processes regarding their payment and remuneration. The concept of soldiers for hire was perhaps unsurprisingly an ambiguous one for the ancient Greeks, as demonstrated by the lack of a single specific word equivalent to modern 'mercenary'. In fact, as English points out, several terms were used to denote a mercenary, such as the Archaic epikouros (helper), xenos (guest-friend), and later the more specific misthophoros (wage-earner), and stratiotes (soldier) - towards the end of the Classical period. The definition of a mercenary offered by the author follows closely the one suggested by Trundle, seeing him as a paid soldier, who fought without a political imperative and was typically a foreigner with no personal interest in the conflict. After a brief note on the limitations of the ancient sources, English goes on to describe the principles governing the methods of payment and remuneration, which, as he rightly asserts, formed the most fundamental aspect of mercenary service. He explains the different types of payments available to soldiers for hire (misthos, sitêresion, ephodia); the typical rates of pay; and the procedures regarding the distribution of booty, which has often been the biggest incentive for soldiers to offer their services as mercenaries. All in all, most of the material which the author covers in the introductory sections is largely based on the work of Trundle, but nonetheless serves as a good starting point for the rest of the book.

The remaining chapters are arranged in chronological order. The author first focuses on the Archaic period, beginning with the employment of Greek warriors by Psammetichus (664-610 BC), followed by around 150 years of continuous service under various Egyptian paymasters. He then moves on to the uses of mercenaries by Greek and Sicilian tyrants, ending the chapter with a speculative discussion of Greek mercenaries in 6th century BC Persia. In the following chapter, English looks at the early Classical period, emphasizing the relative lack of references to mercenaries, largely due to the development of democracies and the rise of the citizen-soldier ideology. The situation, however, was to change quickly. The Persian Wars, which witnessed limited mercenary employment, demonstrated the superiority of Greek heavy infantry which was to encourage the future Persian kings to employ Greek mercenaries in ever-increasing numbers. The turning point, as English suggests, was the Peloponnesian War which left large numbers of men unemployed and seeking paid military service at the end of it, thus paving the way for the so-called 'mercenary explosion' of the late fifth and early fourth centuries.

The most famous affair involving Greek mercenaries in the Classical world was the march of the Ten Thousand (401-399 BC). The expedition, related to us by the mercenary par excellence Xenophon in his Anabasis, is by far our most detailed source dealing with the realities of ancient mercenary service. English provides us with an extensive narrative of the story offering some interesting insights into the everyday life of mercenaries. This, in turn, sets the ground for the discussion of the mainland Greece in the fourth century BC, which saw a significant rise in mercenary employment. Mercenaries, as the author writes, were gradually "becoming the preferred option when city-states had available finances and did not wish to risk the lives of their own citizens" (96). Taking the power struggles of the Greek poleis of the first half of the fourth century as his focus, English argues that the increasing professionalism of mercenaries (symbolised by the light-armed peltasts), combined with their general accessibility, resulted in an increased demand for their services and hence in the gradual decline of the citizen-soldier ideology.

The penultimate chapter concerns the rise of the Macedon in Greece and the use of mercenaries by Alexander the Great. The section is the highlight of the book - which is perhaps understandable considering English's expertise. The author argues that mercenaries "formed a fundamental and immensely important part of Alexander's army throughout the course of his career", even though they did not play any major role in his set-piece battles (131). Their main roles included, as English demonstrates, taking part in smaller military operations by forming secondary columns; protecting the flanks and the rear of the army during set-piece battles; manning the garrisons at strategically important locations; and settling in new colonies. Although the Macedonian king started the expedition with only 5,000 mercenary troops, their numbers grew steadily as the campaign progressed, ultimately becoming a vital part of his army and his new empire. Finally, following the section on the Macedonian army, English looks at the history of Syracuse, providing us with a narrative of the lengthy conflicts between the Syracusan kings and Carthage (480-337 BC). The chapter, which closely follows the account of Diodorus, focuses primarily on the person of Dionysius I, the tyrant of Syracuse, who "had been one of the largest and most consistent employers of mercenaries the ancient world had seen" (174).

The main strength of Mercenaries in the Classical World lies in its accessibility. The majority of the book consists of long sections of well-written narrative based on the ancient works of Herodotus, Xenophon and Diodorus, thus providing a lively and highly readable account of ancient Greek mercenary service. The narrative form of English's book however, prevents him from addressing the subject of mercenaries from a broader historical perspective. He fails to consider the relation between the first mercenaries and the introduction of coinage in the Archaic period; the ideological tensions between mercenary and citizen-soldier armies of the Classical period; and the political and economical impact (or the lack of it) that the 'mercenary explosion' (if there ever was any) had on Greek poleis. The author follows the works of his predecessors Parke and Trundle in a largely uncritical manner, consequently failing to add anything new to our understanding of Greek mercenary service. A further weakness is perhaps the lack of any discussion of different types of mercenary units as well as their general tactics. The only unit that English focuses on in any length are the peltasts, thus largely neglecting other specialist and highly desirable troops available for hire in ancient Greece, such as the Cretan archers, the Rhodian slingers, or the Thessalian cavalry. Finally, there is no summary section at the end of the book, which although understandable for a narrative style work, leaves the reader wanting more firm conclusions.

All in all, English does well in his aim to produce an accessible narrative of mercenary service throughout the Classical Greek world. The book is very eloquently written and although it does not add much to the scholarly debate, it will nonetheless serve as a good introduction for anyone wishing to learn more about Greek mercenaries.